By Amy Lamare on August 6, 2018 in Articles › Entertainment

Seagram's heiress Clare Bronfman has been arrested on racketeering charges for her role in the sex cult Nxivm. She posted bail in the amount of $100 million and was allowed to go home, provided she wear an ankle monitor. She is the sixth member of Keith Raniere's cult to be arrested. Raniere and actress Allison Mack were arrested in May.

NXIVM offers courses and workshops aimed at improving self-fulfillment. According to its website, "NXIVM is a company whose mission is to raise human awareness, foster an ethical humanitarian civilization, and celebrate what it means to be human." Raniere is the only male in NXIVM. Members pay thousands of dollars to attend workshops with the cult leader. It was run like a multi-level marketing business for sex slaves.

Raniere allegedly blackmailed women into becoming sex slaves and then branded his initials into their skin. He was known within the cult as "Vanguard." Former members have said that he urged women to follow near starvation diets. 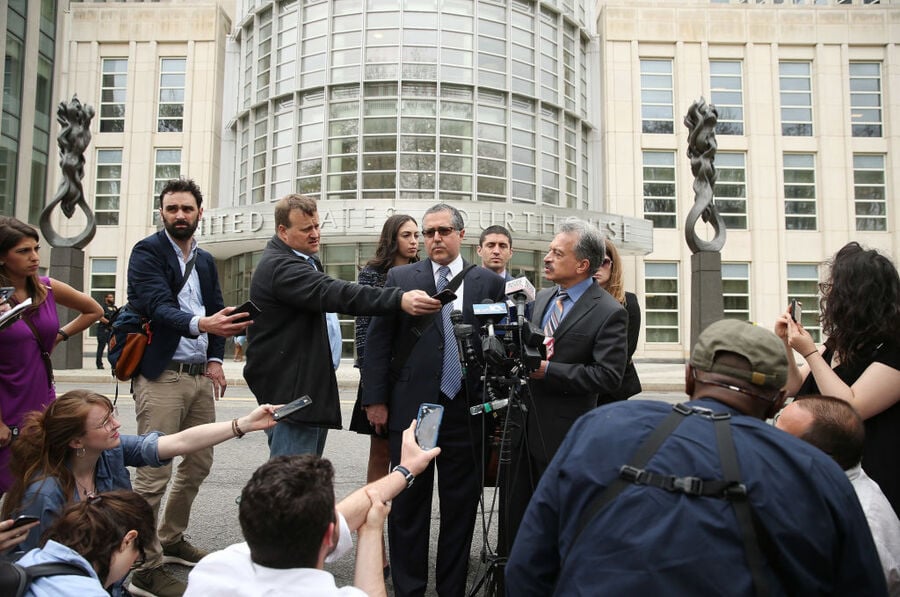 The New York Times reported a detailed description the initiation process for NXIVM's "secret sisterhood." Women would give their recruiters "collateral" in the form of naked photos of themselves and were told if they ever exposed the group, those photos would be released. New members were also restrained and forced to say "Master, please brand me, it would be an honor," before a symbol was cauterized into each woman's skin just below her hip.

The statement from the U.S. Attorney's Office said:

"Raniere and Bronfman participated in an identity theft conspiracy involving the use of credit card and banking information belonging to one of Raniere's sexual partners after her death in November 2016. Bronfman sent Raniere regular emails documenting expenses charged to the woman's credit card for Raniere's 'review and approval.' Those expenses included payments to a chiropractor for Raniere's benefit, as well as thousands of dollars' worth of clothing and shoe purchases for the mother of Raniere's child. Bronfman encouraged and induced the illegal entry into the United States of an alien for Bronfman's financial gain, engaging in international wire transfers to make it fraudulently appear that the victim had the financial resources to obtain an investor visa."

The six people indicted in connection with Nxivm are accused of identity theft, harboring of aliens for financial gain, extortion, forced labor, sex trafficking, money laundering, wire fraud and obstruction of justice. Bronfman is not accused of sex trafficking.

However, it was Bronfman and her sister Sara who helped draw Allison Mack into the group. Nxivm hoped that Mack would become the public face of the group and attract new members, much like Tom Cruise has done for Scientology.

Clare and Sara Bronfman poured about $150 million into Nxivm over the past 20 years. Clare is the youngest daughter of Edgar Bronfman, the former head of Seagram. The 39-year-old is a former equestrian show jumper who was ranked 12th in the country, and 80th in the world, at her peak.

She gave it all up though for Nxivm. In a statement defending Raniere last year, she said:

"I retired from a very successful career as a professional show-jumper because I wanted to do something more meaningful with my life. NXIVM is that. As I said, the programs help. I am happy, healthy and financially more successful than I have ever been."

Clare and Sara didn't just join and fund Nxivm, they also moved to upstate New York to become involved in teaching and training new members of the cult. The billionaire heiresses were able to use their connections to attract big name guests such as the Dalai Lama. He made an appearance at the group's headquarters after the sisters donated $1 million to him through the charitable organization they founded with Raniere, World Ethical Foundations Consortium.

Sara Bronfman has not been arrested.