He Was The Heir To The Baskin Robbins Ice Cream Empire – But Gave It All Up To Dedicate His Life To… Nutrition!

By Amy Lamare on June 8, 2014 in Articles › Entertainment

When you picture John Robbins – the only son of the founder of Baskin-Robbins – you might imagine something out of Willy Wonka. Growing up around ice cream, I picture an overgrown kid with a fondness for bubblegum ice cream and a big belly. A male Veruka Salt, if you will. This vision of John Robbins could not be farther from who he actually is.

Instead of taking on the ice cream parlor throne that was his birth right, Robbins walked away from incredible wealth and ironically became one of the first people to popularize the links between nutrition, environmentalism, and animal rights. As an adult, John rejected the family business and wrote "Diet for a New America," a 1987 book that criticized the meat and dairy industries. How did Robbins, who could have overseen a major corporation, come to instead become an author, modern day hippie, and advocate for a plant-based diet?

Baskin-Robbins was founded in 1945 in Glendale, California by Irvine "Irv" Robbins and his brother-in-law Burt Baskin. Robbins was the son of a dairyman and grew up working in the family's ice cream store in Tacoma, Washington. He remembered that he was always happy at the end of a day of work, and wanted that same feeling when he started his own business. Robbins and Baskin hit upon the 31 flavors idea early and are largely credited with moving America's ice cream preferences beyond simply chocolate, vanilla, and strawberry. He ran Baskin-Robbins with a sense of fun and eye for marketing that helped turn some of their flavors into cultural touchstones. For instance, when the Dodgers moved to Los Angeles in 1958, Robbins debuted the flavor Baseball Nut. Lunar Cheesecake was launched in 1969 on the day after Neil Armstrong and Buzz Aldrin landed on the moon. When Beatle mania hit its apex in 1964, a reporter asked Robbins what flavor was being launched for the Fab Four. Robbins hadn't planned to do one, but responded "Uh, Beatle Nut, of course," and had the flavor in his stores five days later.

John Robbins is the only son of Irv Robbins. He was born October 26, 1947 and grew up swimming in an ice cream cone shaped swimming pool. He was groomed from an early age to one day not just join his father at 31 flavors, but eventually take over the company. When he was six years old worked in the Baskin Robbins offices in Glendale, California was a cleaner. When he was a teenager he spent every summer vacations in the company's stores and factories. By the time he went to the University of California, Berkeley, in the mid-1960s, he was just a few years away from taking over the entire business. At Berkeley, he developed a passionate interest in left-wing politics. Robbins was active in protesting the Vietnam War much to the irritation of his right-wing father. He marched for civil rights throughout the South with Martin Luther King. He was developing a life and interests that were far from heading a global ice cream empire.

Robbins obtained his bachelor's degree in 1969. He spent his college years, which encompassed the famous summer of love, in the late 60s in the eye of the free love and hippie hurricane. By the time Robbins graduated from Berkeley he'd spent years thinking about ice cream, health, and his role in his dad's ice cream empire. A series of light bulbs were going off in his head—among them the sudden cardiac arrest and death of his uncle Burt Baskin at 54. Baskin had been a big eater of the frozen treat. Then his father was diagnosed with a severe case of Type II diabetes. Irv swore that these two health problems were not related to ice cream. While John could see why his father, who had manufactured more ice cream than any human being on the planet and didn't want to think that his beloved ice cream would hurt anybody had to think that–John himself was convinced there was a connection and that there was more to life than creating a 32nd flavor of ice cream.

He told his father he wanted out of the family business. Irv was old school and believed a woman's place was in the home. Irv Robbins had no intentions of handing his ice cream empire over to one of his two daughters and his only son was telling him he wouldn't take his rightful place at the head of the company. He cut John off without a penny.

So in 1969, just out of college, John Robbins walked away from the family fame and fortune and moved to a one room log cabin on an island off the coast of British Columbia where he and his wife Deo would pursue a life of meditation and a conspicuous need to not consume material things, spending just $500 per year. John said he walked away from a life of unlimited consumption to "…pursue the deeper American Dream…the dream of a society at peace with its conscience because it respects and lives in harmony with all life forms. A dream of a society that is truly healthy, practicing a wise and compassionate stewardship of a balanced ecosystem."

In 1984 Robbins, his wife, and their 10-year old son Ocean moved to California so Ocean could attend traditional schools. The settled in the Santa Cruz area, where he began work on the 1987 book Diet for a New America: How Your Food Choices Affect Your Health, Happiness, and the Future of Life on Earth. The book explained what he'd learnt while living "off the grid". Diet for a New America was one of the first books to explain why a typically American diet that was dependent on meat, dairy and factory farming was unhealthy. The book became an international bestseller. Robbins was wealthy again. Oprah was calling to invite him on the show. 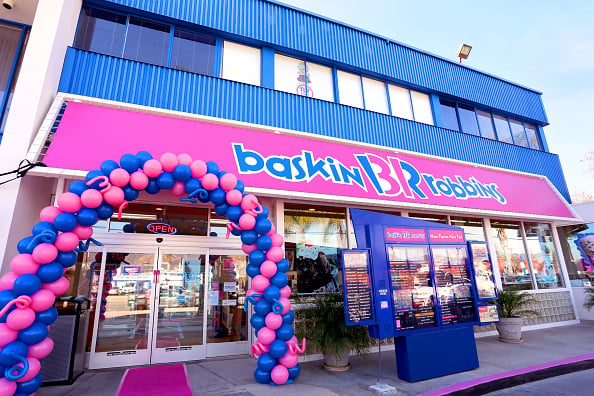 In the book, Robbins advocates for a plant-based vegan diet and espouses his theories on the inherent problems in and unhealthy practices of the meat and dairy industries, as well as world hunger and human health. The book is essentially an exposé on connections between diet, physical health, animal cruelty, and environmentalism. Response to this book was extraordinary, and Robbins appeared on many major television and radio programs, as well as in magazine and newspaper articles. The media dubbed him the "rebel without a cone."

Robbins' became a very wealthy man through his work advocating a plant-based diet for ethical, environmental, and health reasons. The former ice cream empire heir also shot down the common belief that milk product consumption is essential to human health. The American Journal of Clinical Nutrition found that the absorbability of calcium from leafy green vegetables was significantly higher than that of dairy products. The calcium in Brussels sprouts is 64 percent absorbable; mustard greens 58 percent; broccoli 53 percent; turnip greens 52 percent; kale, 50 percent. And cow's milk straggled behind at a mere 32 percent. Do you think his father, uncle, and grandfather rolling over in their graves? Or are they happy their heir found a better and healthier way to live?

Robbins updated the ideas from Diet for a New American in the 2001 book The Food Revolution, in which he included information on organic food, genetically modified food, and factory farming long before they became hot button issues for the general public.

Only one member of John's extended family ever bought into his hippy-dippy worldview – the rest still barely speak to him. It was his father, Irv. When he became ill in the late 1980s he was advised by a doctor to read his son's book, Diet for a New America. He adopted some of his son's advice – he stopped eating sugar, ice cream, and severely cut back on meat – and was able to survive for another 20 years.

In 2008, Baskin-Robbins launched its first full menu of healthier frozen treats called BRight which removed all artificial Trans Fats from its ice cream.

Irv Robbins died in May 2008 at age 90 from complications of old age. When his only son went to see him on his deathbed he told John that he was actually proud that he had the courage to follow his own path.

Back in 2001, Robbins' life of comfy hippiedom was interrupted when his grandchildren were born severely disabled. They would need care throughout their lifetime that would cost millions of dollars. Robbins wanted to help Ocean and his wife out and finance it, so he invested much of his net worth in a deal recommended to him by a friend with a guy named Bernie Madoff.

On December 8, 2008, John Robbins, who walked away from an ice cream fortune and became a wealthy and famous man in his own right, got a phone call. On that call, Robbins learned that almost every penny he had had disappeared in Bernie Madoff's elaborate Ponzi scheme. Overnight, Robbins lost 95 percent of his net worth. He has said: "I was terrified, and utterly horrified. I'll never forget that moment."

How does a vegan hippie who went from a wealthy heir to purposefully poor, to a self-made millionaire handle losing it all later in life? The loss was hard on Robbins has he had put much of his money aside for his twin grandchildren who have special needs. He wrote in The New Good Life: Living Better Than Ever in an Age of Less regarding the Madoff scam and its effect on his family:

"At first, I felt such enormous shock that I genuinely wondered if it might kill me. The anguish was so intense I could hardly sleep, and when I did, my sleep was roiled with nightmares."

Robbins quickly went back to his roots and reprioritized his life. He had to redefine once again what it meant to live richly. He had to remember how wealthy he felt back in that one room log cabin in British Columbia with just his wife and young son. Robbins and his wife sold most of their furniture, got rid of their expensive cars and consumer goods, started working extra hours, and grew their own food to stave off immediate bankruptcy. They began sleeping on a camp bed at his office, so they could take in lodgers at their eco-house near Santa Cruz. It was tough for his family but also, strangely liberating. Now his goal is to help us replace our "culture of excess" with a culture based on joy. 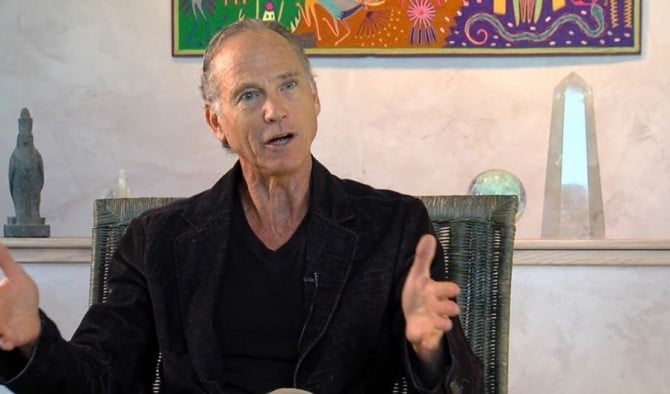 John Robbins, former ice cream heir, unlikely millionaire, and vegan environmentalist has been a recipient of many awards for his advocacy work including the Albert Schweitzer Humanitarian Award, the Peace Abbey's Courage of Conscience award, and lifetime achievement awards from groups including Green America. He is the Founder and Board Chair Emeritus of EarthSave International, an organization dedicated to healthy food choices, preservation of the environment, and a more compassionate world.

Robbins' Healthy at 100, published by Random House in 2006, was printed on 100% post-consumer non-chlorine bleached paper, a first for a book from a major U.S. publisher. He has written eight books.

John's life is dedicated to creating an environmentally sustainable, spiritually fulfilling, and socially just human presence on this planet. He lives with his wife Deo, their son Ocean and his wife Michele, and their grandsons River and Bodhi in the hills outside Santa Cruz, California. The Robbins' offices and home run on solar electricity.