35 Years Ago Today – March 13, 1986 – Microsoft Went Public… Setting Off One Of The Greatest Generators Of Private Wealth In History

By Brian Warner on March 13, 2021 in Articles › Entertainment

For people who enjoy reading stories about extreme wealth, March 13 should be a holiday. If it was a holiday, today we would be celebrating the 35th anniversary of the launch of one of the greatest wealth-creating machines in human history. What happened 35 years ago today? That's the day a little software company in Seattle called Microsoft went public.

The events of March 13, 1986 would eventually mint thousands of millionaires, a handful of billionaires and three of the largest personal fortunes in human history. Within a decade of its IPO, company co-founder Bill Gates would be the richest person in the world, a title he held for the better part of 20 years.

How much wealth did Microsoft generate for its founders and where is that wealth today? How rich would you be today if you had been lucky enough to buy $10,000 worth of MSFT on March 13, 1986 and held for the next 35 years, collecting dividends and new shares from stock splits? Let's find out!

Microsoft was founded by childhood friends Bill Gates (aged 20) and Paul Allen (aged 22) in Albuquerque, New Mexico, on April 4, 1975. Yes that's right, Albuquerque. Not Seattle. The reason the company was founded in Albuquerque is because it happened to be the hometown of a company called Micro Instrumentation and Telemetry Systems (MITS).

Allen and Gates met while they were both attending Seattle's Lakeside School. They bonded over their love of computers and programming. Allen was two years older than Gates. After getting a perfect score on the SAT, Allen enrolled at Washington State University. He dropped out after two years and took a job at Honeywell in Boston, whose offices happened to be a few minutes from Harvard where Bill had recently enrolled.

In January 1972, Popular Electronics Magazine did a feature on MITS' latest invention, the Altair 8800 microcomputer. According to legend, Paul saw the cover of the magazine while walking through Harvard Square. He bought the magazine, tracked down Bill and frantically convinced him that they both needed to leave Boston (Bill was in the middle of his junior year) and move to Albuquerque where they would build an operating system for the Altair.

Executives at MITS were impressed with their OS and hired the young duo to create software for the company. But Allen and Gates had bigger ideas and soon struck out on their own.

In 1976 "Micro-Soft" generated $16,005 in revenue selling software to some of the world's first personal computers.

In January 1979, after dropping the hyphen, Microsoft relocated to Seattle. In addition to being closer to their childhood homes, Gates and Allen found it difficult to recruit top quality programmers to move to New Mexico.

Steve Ballmer, one of Bill's friends from Harvard, became Microsoft employee #30 on June 11, 1980. He was hired to run business development.

One Brilliant Decision Launches A Fountain Of Wealth

That same year (1980) IBM announced its intention to hire a software company to develop an operating system that would become standard for all IBM personal computers. IBM initially approached Microsoft. Incredibly, Gates suggested they get in touch with his friend Gary Kildall down in the Bay Area, the founder of a company called Digital Research, Inc., which had already developed an OS that could be adaptable to IBM machines. Gates even went so far as to call Gary while the IBM people were still in his office, so they could set up a time to meet the following day.

Depending on who you talk to, Gary's IBM meeting was bungled for a couple different reasons. Here's what is known: When the IBM executives arrived for their meeting they were greeted by Gary's wife Dorothy. Gary, for reasons that have been debated for decades, missed the meeting because he was out flying his plane. The stuffy IBM executives were incensed. They flew back to Seattle and asked Bill if he would reconsider building their operating system.

There was just one problem. Microsoft wasn't anywhere close to developing what could be used as an OS for IBM. Soooo Bill called up a Seattle-based developer named Tim Paterson who had developed a clone of Gary's software which he called "86-DOS". Bill negotiated a deal to buy 86-DOS for $100,000.

Bill and his team made a couple nominal changes. They also changed the OS name from "86-DOS" to MS-DOS.

The IBM team was extremely happy with what they saw in MS-DOS and wanted to strike a formal partnership for that to be the standard operating system for all of their machines.

In what is arguably the most brilliant move in business history, instead of selling the rights to MS-DOS directly to IBM, Gates opted to license the software. As a result, Microsoft retained ownership of MS-DOS and could therefore license it new customers.

Step back for a moment and digest the significance of that decision.

Imagine if Henry Ford hired you to invent an engine for his automobile. And imagine if instead of selling your creation to him outright, you licensed it so you earned a fee every time a Ford car was sold. Then as new car companies like Dodge, Buick, Chevrolet, Ferrari… etc… pop up you licensed your engine to them as well. So you earned a royalty every time a car was sold for the 100+ years.

That's exactly what happened with Microsoft. As the PC revolution exploded around the world, MS-DOS became the standard for pretty much every computer that was built. And every time someone bought a PC, they were also forced to buy a MS-DOS license from Microsoft. 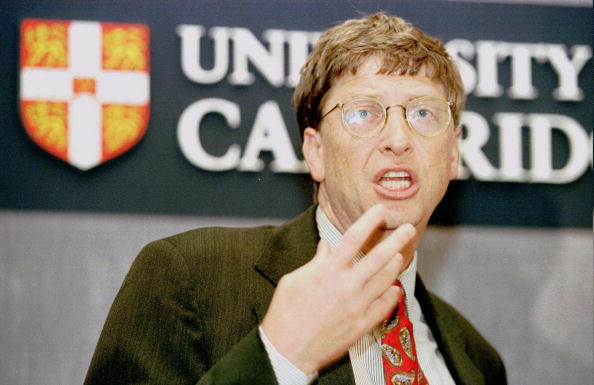 In 1983, Xerox developed a revolutionary operating system that connected the PC's mouse to the computer screen. For the first time ever, a human could move his or her hand, and the mouse would follow. Point, click. Drag, drop. It was originally called the "graphical point and click interface". More commonly known today as the "graphical user interface" (GUI, pronounced "Gooey"). This little innovation is still the standard in every computer to this day.

For some insane reason, Xerox invited executives from both Apple and Microsoft to check out what they had created. Literally they invited Bill Gates and Steve Jobs to come view a demonstration. This would be like inventing a new type of alcohol that didn't cause hangovers, then inviting executives from all the major alcohol companies to come by and check out the ingredients.

Within a matter of months, both Apple and Microsoft were working on their own operating systems that had graphical, point and click mouse interfaces.

When Steve Jobs learned that Microsoft was also working on an operating system based on Xerox's innovations, he was furious. He demanded Bill Gates come to Apple's headquarters and account for his actions. Here's how that legendary interaction went down in an Apple conference room:

"You're ripping us off! I trusted you, and now you're stealing from us!"

Gates sat coolly on the other side of the conference room while Steve unloaded his fury. When the Apple founder was done, Gates replied:

"Well, Steve, I think there's more than one way of looking at it. I think it's more like we both had this rich neighbor named Xerox and I broke into his house to steal the TV set and found out that you had already stolen it." 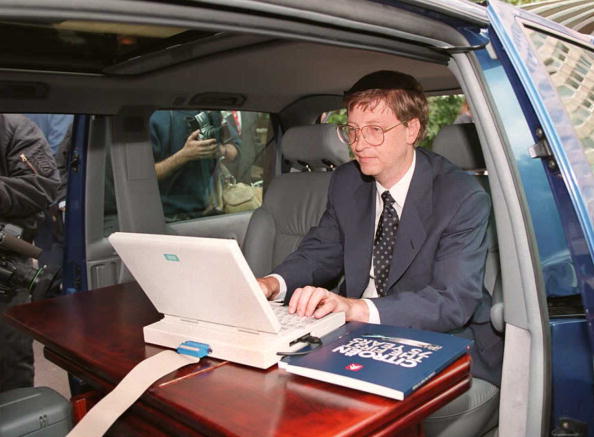 Microsoft Windows was released on November 20, 1985. Within a matter of months, the PC became the global computing standard and subsequently pushed Apple to the wayside for more than a decade. And every time a PC was sold, Microsoft earned a fat royalty check for its software.

Over the next several months, Microsoft would slowly gain a number of new private investors. According to Securities and Exchange Commission regulations, once a company has more than 500 private shareholders it must go public. Therefore an IPO was inevitable, even though Bill Gates would have preferred to stay private.

Microsoft wasn't the first software company to IPO in the mid-1980s. It wasn't the only software company to go public in March of 1986! Literally one day before Microsoft's IPO, Larry Ellison's Oracle Corp went public. Oracle planned to offer 2.1 million shares at $15 per share. By the end of its first trading day, Oracle shares sat at $19.25. This was seen as a very positive sign by the bankers guiding Microsoft's debut, so MSFT's opening price was raised from $16 to $21.

"It's wild! I've never seen anything like it — every last person here is trading Microsoft and nothing else!"

That's right, Bill Gates was worth "just" $350 million after the Microsoft IPO. What's even crazier is the fact that he personally only sold $1.6 million worth of shares on opening day. He wasn't even in Seattle when the company went public. Bill was in Australia on vacation on IPO day. He would eventually use $150,000 of his IPO earnings to pay off the mortgage on his Seattle house.

Paul Allen, who was at least actually in Seattle on IPO day, told a local paper that he was "very happy" and "might go out for some champagne later to celebrate". What a couple of maniacs!

Here's what happened to Microsoft in the 30 years since it has been a public company.

As of this writing, the company has a market cap of $1.7 trillion.

As of this writing, Bill Gates is the third richest person in the world with a net worth of $137 billion. Interestingly, he actually does not own that much Microsoft anymore. Today Bill owns less than 1.3% of the company he founded. He has donated tens of billions of dollars to charity and intends to give the majority of his fortune away before he dies.

Paul Allen actually left Microsoft in the mid-1980s, but stayed on the company's board of directors until 2000. Paul used his fortune to invest in companies like Dreamworks and an impressive portfolio of real estate. He owned three sports teams, the Seattle Seahawks, Seattle Sounders FC, and the Portland Trailblazers. He had a net worth of $20 billion at the time of his death in October 2018. His wealth will eventually be donated to charity. The estate is currently managed by his sister Jody Allen.

Steve Ballmer took over as Microsoft CEO in 2000 when Bill Gates stepped back from the company. He served as CEO until 2014. He still owns around 333 million shares of Microsoft and has a personal net worth of $87 billion. That makes him the 10th-richest person in the world. Ballmer owns the Los Angeles Clippers. As of this writing, it's unclear what Ballmer plans to do with his wealth. Interestingly, he is NOT joined Bill Gates' Giving Pledge.

So, how much would you be worth today if you bought a bunch of MSFT shares and held on to them for 35 years?

If you had bought $10,000 worth of Microsoft on the IPO day, you would have been able to acquire 476 shares. After various stock splits and dividend reinvestments, today you would own 137,088 shares.