By Brian Warner on July 4, 2015 in Articles › Entertainment

Everyone knows that July 4th is a very important day in American history. In addition to marking the 16th anniversary when we came together as human beings to defeat a powerful alien force and save mankind, July 4, 2015 also represents the 240th anniversary of when the Declaration of Independence was ratified and signed by the Continental Congress. The Declaration announced to the world that the United States would move forward as its own independent country, separate from England and King George III's tax collectors.

In the late hours of July 4, 1776, the original signed Declaration was brought to a nearby printing press shop owned by a 29 year old Irish immigrant named John Dunlap. Dunlap proceeded to print dozens of copies of the Declaration. These copies were then distributed up and down the east coast in the following days. George Washington ordered that a copy be of the Declaration be read aloud to every one of his troops. Another Dunlap print was sent to King George back in England.

The majority of the Dunlap prints were discarded or destroyed over time. In fact, by 1949, there were only 14 copies in known existence. Seven more copies had been found by 1975. By 1989, there were a total of 24 known Dunlap prints left in the world. That all changed on a hot summer day at a Pennsylvania flea market in 1989… 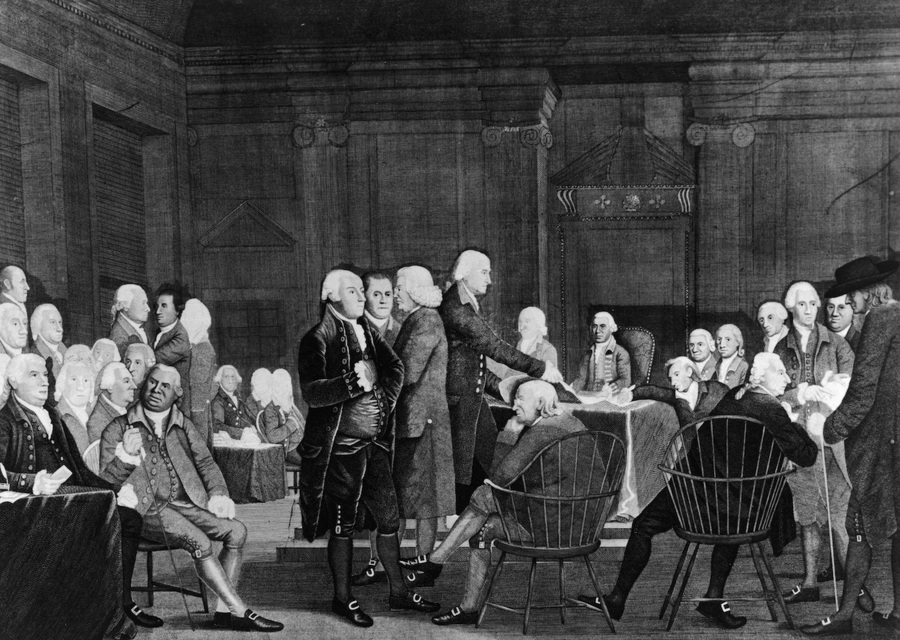 In the summer of 1989, a man was walking through a flea market in Adamstown, Pennsylvania, which is roughly an hour outside of Philadelphia. At some point during his flea market visit, the man's eye was caught by a painting that was held in a "gilded and ornately carved" frame. The beautiful frame was holding what the man later described as a "dismal dark country scene", but the frame itself was beautiful.

So, after a little bit of negotiation, the man agreed to buy the frame and the painting for a grand total of $4.

When the buyer got home, he removed the dismal country scene painting from the frame and in doing so, ended up rendering the frame useless. $4 down the toilet, right? Not so fast…

Upon further inspection, he discovered that there was something hidden behind the ugly painting. Whatever it was, it was folded up, roughly into the size of a business envelop. Was it an old bill of sale? Nope. A letter from a secret admirer? Nope. Maybe a child's report card that had been hidden to cover up a bad grade? Nope.

To his amazement, that folded up paper turned out to be a copy of the Declaration of Independence. And not just any copy. A few months later, a historian would confirm that it was an original Dunlap copy, bringing the known total up to 25.

Two years later, Sotheby's put the newly found Declaration up for auction. Experts believed it would fetch a maximum of $800,000, but when the gavel struck on June 13, 1991, the final price topped $2,420,000. That's roughly $4.2 million in today's dollars. The buyer was a fine arts collector and investor named Donald J. Scheer. Scheer held onto his copy for nine years, when he put it up for auction again. This time it fetched $8 million.

As of this writing, there are 26 known Dunlap prints in the world, another copy was discovered in 2009 at the British National Archives. Out of the 26 known copies, 23 are controlled and stored by the United States government, the other three are in private collections. One of the three in private hands is the one that was found on that fateful day at a $4 flea market.