Guy Fieri is often called "the Mayor of Flavortown," but with the contract he just signed that title might need to be adjusted up a bit. Starting today, Guy is more like the "the Emperor of Moneytown." And, in my opinion, no one deserves the title and pay bump more than Mr. Guy Fieri – whose Restaurant Employee Relief Fund topped $25 million last month. An estimated 43,000 restaurant employees have received a grant from Guy.

Guy Fieri has been a fixture on The Food Network since 2006 when he first appeared as a contestant on "Next Food Network Star." The appearance led to Guy's first solo Food Network show, a six-episode series called "Guy's Big Bite." Guy made a TOTAL of $6,000 for that series.

It was just announced that Guy Fieri agreed to a new three-year $80 MILLION contract with The Food Network – which equates to $27 million per year.

Discovery, the parent company of the Food Network, typically doesn't shell out the big bucks to its popular hosts but they had good reason to lock Fieri in for another three years: "Diners, Drive-Ins, and Dives" generated more than $230 million in ad revenue in 2020 alone. 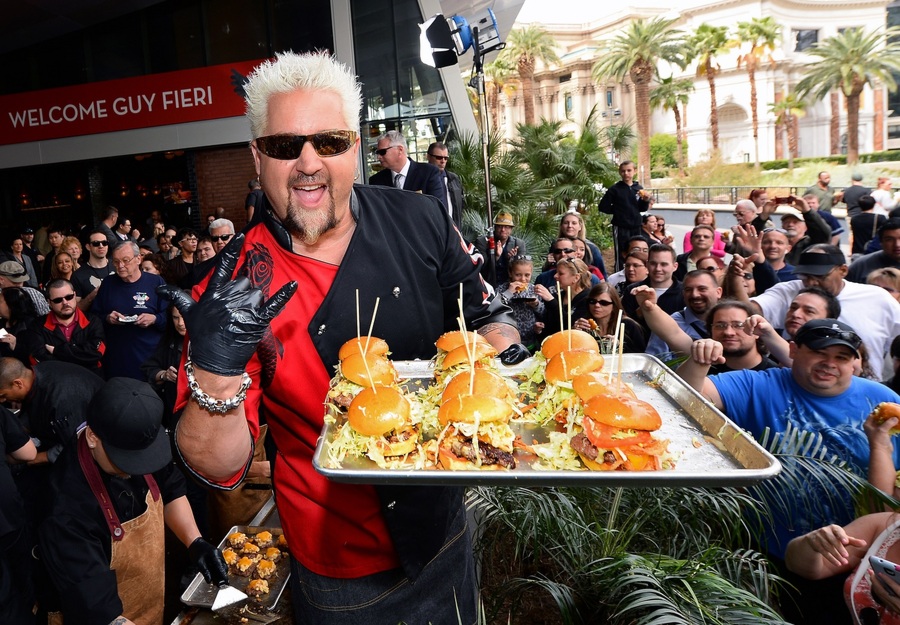 Guy Fieri got his start in the food business at 10-years-old working at a pretzel stand. He went to UNLV and studied cooking in Chantilly, France. His first restaurants focused on Tex-Mex cuisine in Northern California.

Fieri has had 14 series on The Food Network to date. He also still owns his first restaurants in Northern California and has licensed his name to 80 restaurants across the globe. In 2020, he launched started a delivery-only "ghost kitchen" business called Flavortown Kitchen. There are 175 locations across the US.

In 2017, Guy teamed up with fellow NorCal resident Sammy Hagar to launch Santo Tequila. This venture has the makings of turning into another enormous windfall someday. Sammy has already had a huge success with the Cabo Wabo tequila brand. In 2007, Sammy sold 80% of the Cabo Wabo tequila company to Gruppo Campari for $80 million. In 2009, he sold the remaining 20% for an additional $15 million. That sale – NOT his work with Van Halen – is responsible for the majority of Sammy's current $150 million net worth.

What will Guy Fieri's title be if he is worth $150 million in a few years? Maybe "The King of Cashtown"?