By Amy Lamare on September 20, 2013 in Articles › Entertainment

In 1992, an Australian mining magnate named Lang Hancock died suddenly at the age of 82. According to his will, Hancock's entire business empire was left in a trust that was to be controlled by his only daughter, a 38 year old single mother of four named Gina Rinehart. This meant that Gina instantly inherited a mining empire and various other assets that were estimated to be worth $125 million ($200 million in today's dollars). Thanks to an explosion in commodity prices, over the next twenty years Gina's personal wealth has increased to $18.9 billion. But it hasn't always been easy. During those 20 years, Gina has been sued by her former step mother, a personal biographer and several of her own children. On the other hand, some analysts believe Gina is on pace to become the wealthiest person in the world in the next decade, with a net worth that could easily top $100 billion. Gina Rinehart's rise to become the richest person in Australia has definitely not been dull. This is her story…

Lane Hancock was born into one of Australia's largest land-owning families in April of 1909. One day in November 1952, Lane and his wife were flying over a rural area of Western Australia called Pilbara on their way to Perth in a small private plane. Bad weather forced him to re-route the plane over a particularly rugged section of terrain. While flying through, Lane noticed the nearby mountain walls appeared to be made up of what looked like solid iron ore. He moved quickly to purchase hundreds of acres of the land he hoped might indeed contain the iron ore he spotted from the plane. Unfortunately, at the time Australia actually did not allow the exportation of iron ore, so even if his discovery proved solid (no pun intended) it would be nearly worthless. Over the next nine years, Lane and his newly founded company Hancock Prospecting furiously lobbied the Australian government to lift the ban. They were finally successful in 1961 and, as it turns out, Lane had actually stumbled upon the single largest iron ore deposit in the history of the world. As we mentioned earlier, over the next thirty years, Lane's empire grew and his personal net worth eventually topped $125 million. 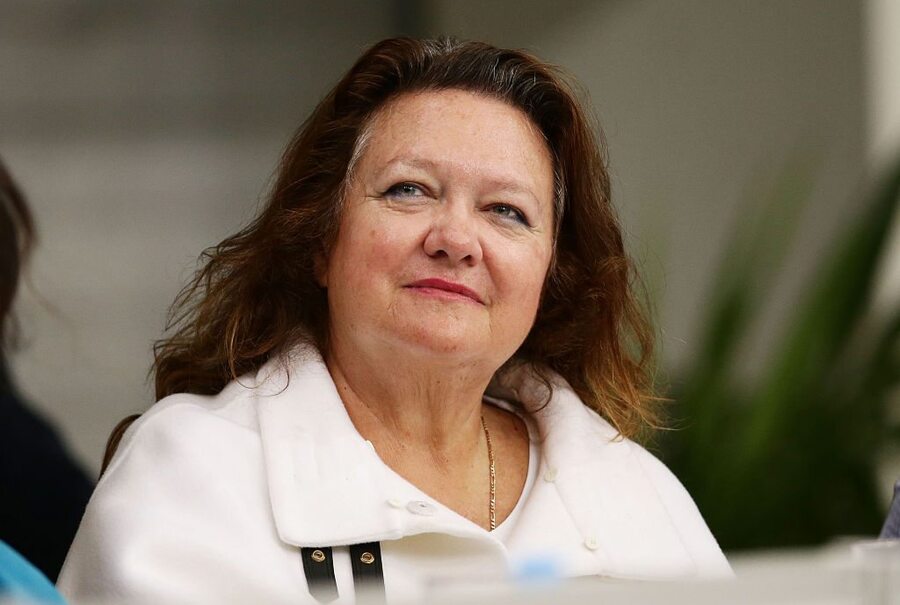 According to his will, the majority of Lane's business interests were left in a trust for his daughter Gina and her children. By doing this, Lane specially excluded his third wife Rose Porteous from the mining empire. Despite being left with roughly $25 million worth of property and other assets, Rose was furious to discover she was cut out. Gina was not happy either, having believed that Rose exacerbated Lane's death with years of unnecessary nagging and stress. That may sound ridiculous, but their mutual hatred set off a bitter legal battle that lasted 14 years and cost tens of millions of dollars.

Gina Rinehart was born in Perth, Australia on February 9, 1954. She briefly attended Sydney University but dropped out to work for her father at Hancock Prospecting and build her knowledge in the Pilbara region's iron-ore industry. In 1973, at the age of 19, she married an Englishman named Greg Milton. Gina and Greg eventually had two children, John Langley and Bianca Hope, before divorcing in 1981. In 1983, Gina married again, this time to a man nearly twice her age named Frank Rinehart. Frank was a 57-year old German-American attorney who had recently been disbarred in three states after being convicted of felony tax evasion. He received a one year suspended sentence for the charge and was no longer allowed to practice law in The US. They had two children together, Ginia and Hope. Unfortunately Frank died in 1990 of a massive heart attack.

This is how it came to be that a 38 year old single mother of four inherited one of Australia's largest business empires in 1992. Between 1992 and the present, Gina has experienced her share of ups and downs.

In addition to being sued by her step-mother for 14 years, Gina has been sued several times by her own children over control of Hancock Prospecting. In 2003, Rinehart had a falling out with her son, John, and he changed his surname to Hancock. His sister, Bianca, was slated to take over the family business from her mother, but she was replaced in 2011 by her half-sister Ginia at their mother's direction. Gina was also sued by her personal biographer and survived a breast cancer scare.

On the other hand, during that same time period Gina's business has experienced an unbelievable level of success. Thanks to an explosion in the value of commodities like iron, copper, coal and gold, Gina has seen her personal wealth increase from $125 million in 1992 to $1.8 billion in 2006 to nearly $19 billion today. At one point in 2012 her net worth was rumored to be north of $30 billion.

Her mining operations have become so valuable that every year she earns about a billion dollars personally from the iron ore and coal projects alone. Today, Gina Rinehart is not just Australia's richest person, she is the 42nd richest person in the world and the fifth richest woman in the world.

And if all of this wasn't amazing enough, some analysts believe that Rinehart's mining portfolio is so valuable that at some point she will surpass Bill Gates to be the richest person on the planet. In 2012, Australian magazine "Business Review Weekly" estimated that Gina's net worth will top $100 billion in the next decade. 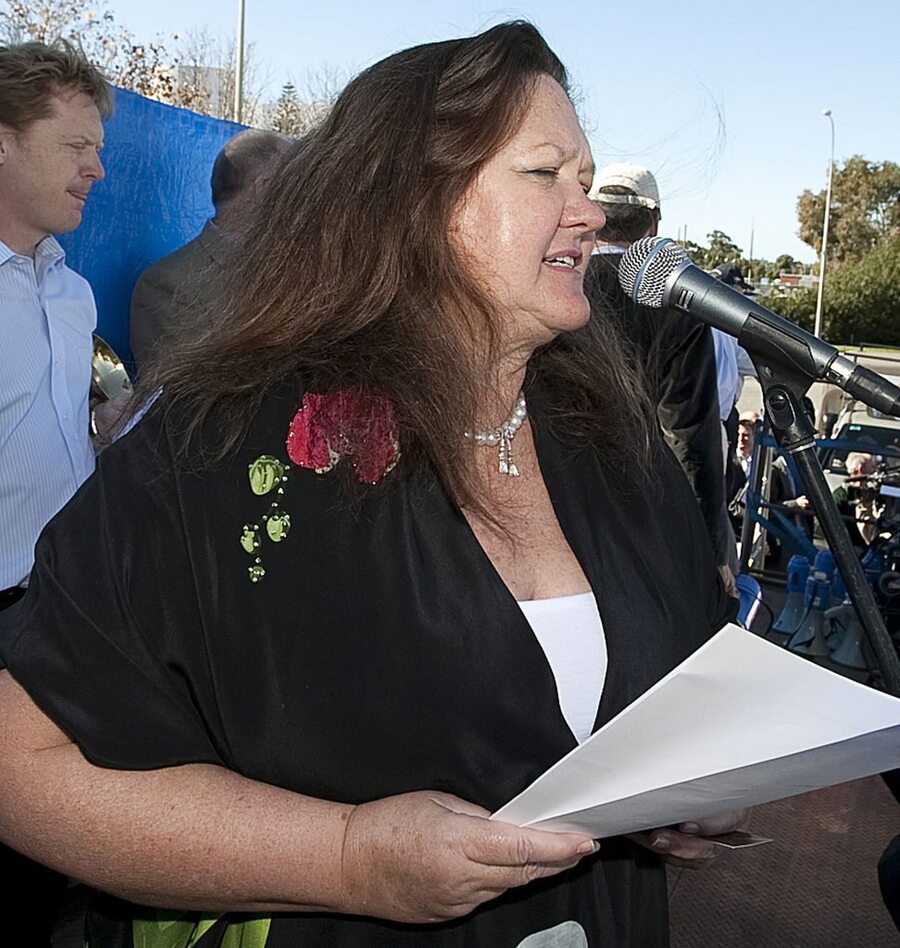 In recent years, Rinehart has focused on developing Hancock Prospecting's underdeveloped deposits, raising capital through joint venture partnerships and turning leases into profitable revenue producing mines. Besides the near total control Gina has over Hancock Prospecting, she has a 10% stake in Ten Network Holdings, and a 12% stake in Fairfax Media.

Gina lives a very lavish lifestyle complete with lavish mansions in several Australian cities. Her Perth mansion alone is worth $25 million. She has a fleet of cars and travels the world in her luxurious custom-made private jet. Philanthropically, Rinehart is passionate about women's causes. She single-handedly funded the construction of an orphanage in Cambodia and sponsors the education of many poor girls around the globe. She has worked tirelessly to curb human trafficking.

Rinehart self-published a controversial book in November 2012. In the book, she called for Australian workers to accept wages comparable to the $2-a-day African workers earn. Not surprisingly, these remarks caused a bit of a global outrage. Gina has also raised eyebrows by pushing for the northern region of the country (where the bulk of Hancock Prospecting's holdings reside) to become a special economic zone with lower taxes and less regulation. There are presently two Australian made-for-TV movies about Gina in the works. One, a documentary project, is entitled The House of Hancock. The other is a miniseries in development called Mother, Monster, Magnate. Somehow I doubt Gina worries too much about her own personal controversies. She's too busy working on becoming the richest and most powerful person on the planet.