By Brian Warner on November 17, 2013 in Articles › Entertainment

On Saturday night, Georges St-Pierre won a controversial split decision against Johny Hendricks at UFC 167. The fight was so controversial that even UFC President Dana White publicly blasted The Nevada State Athletic Commission, which oversees the referring of matches in Las Vegas. Immediately following the fight, Dana White told reporters: "This is the thing that makes people not like fights. I don't even know what to say. I'm still so blown away by it. Georges knew he lost, his corner knew he lost. Hendricks knew he won, his corner knew he won… These guys, this commission is just despicably horrible. Regardless of who really fought the better fight on Saturday, there was one clear winner in another very important category: MONEY. And who was that clear winner? Georges St-Piere. As the Pay Per View buy tallies begin to roll in, it's very likely that Georges St-Pierre will end up taking home $5-6 million for his efforts at UFC 167. This is how that is possible…

Georges St-Pierre is the biggest pay per view draw for the UFC today. Where an average UFC event will typically draw roughly 350,000 PPV buys, Georges St-Pierre's last fight brought in 950,000. Thanks to his massive popularity, GSP is able to earns massive amounts of dollars in the form of prize money, PPV bonuses and endorsements. So much money that Georges recently topped our list of the richest richest MMA fighters in the world with a personal net worth of $25 million. 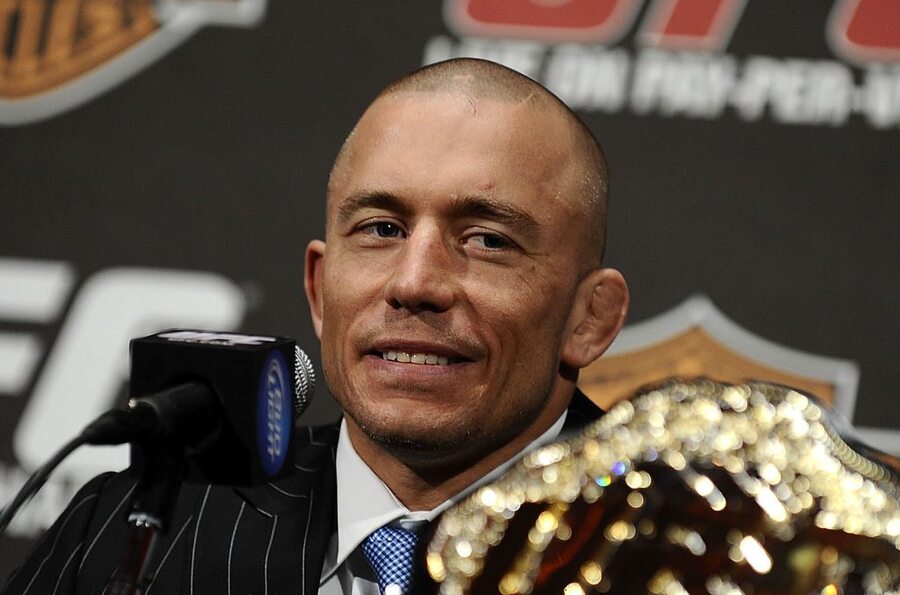 The revelation that Georges St-Pierre makes at least $5 million per fight was first reported by Georges himself in an interview from 2011. In the interview, GSP stated: "For me, a fight is (worth) $4 to $5 million, and in the city where the UFC holds its events, there are economic benefits of between $15 to $20 million. It's huge!" So how exactly does Georges St-Pierre make $5-6 million for a single UFC fight?

How much does Georges St-Pierre earn per fight?

First off, whenever Georges St-Pierre fights, he typically commands $200,000 just to show up. He then can earn an additional $200,000 bonus if he wins (and he usually does). And while $400,000 is a nice chunk of money for a single night's work, the real windfall comes from the fight's Pay Per View sales. To understand just how much a fighter like GSP can earn off PPV sales, we can use Randy Couture's final UFC contract (which became public as part of a lawsuit) as a rough base for comparison:

For UFC 158 back in March 2013, it is known that GSP earned $200,000 to show up plus a $200,000 win bonus, for total prize money of $400,000. UFC 158 was purchased by 950,000 people. Using the math above, GSP took home a minimum PPV bonus of $2.85 million. We say "minimum" because Dana White himself has stated that GSP's bonus for UFC 158 was actually closer to $5 million. So using those numbers as a range, Georges earned of $3.25 – $5.4 million off that one fight alone. And we haven't even talked about endorsements. Georges has an estimated 14 different endorsement deals that each pay over six-figures. Some of the companies backing GSP include Gatorade (their first MMA athlete), Under Armour, Google, NOS energy drink (owned by Coca-Cola), Hayaboosa, 888poker, Affliction, Electronic Arts and Bacardi. These endorsements reportedly earn Georges an additional $1-2 million per fight. To understand just how much these endorsements can be worth to a fighter, keep this stat in mind: On July 7, 2012, Anderson Silva earned $500,000 to wear a Burger King logo on his shorts for one night at UFC 148. Assuming GSP agrees to perform two UFC fights per year an you can start to see how his total annual income can easily top $12 – $15 million per year.

Would you take a UFC-style beating if it meant you earned $6 million for one night's work?