By Brian Warner on October 21, 2018 in Articles › Entertainment

On the other hand, it's possible that some readers out there are finding out for the first time right now that George used to be a boxer. As crazy as this sounds, it's understandable that younger generations might only know him as that affable TV pitchman who hawks products like Meineke, InventHelp.com and of course, the George Foreman Grill.

Regardless of how you know George, he certainly has had an amazing career. And considering the fact that he earned a cut of all the Grill profits, George must have made an enormous amount of money in his career. Let's find out exactly how enormous… 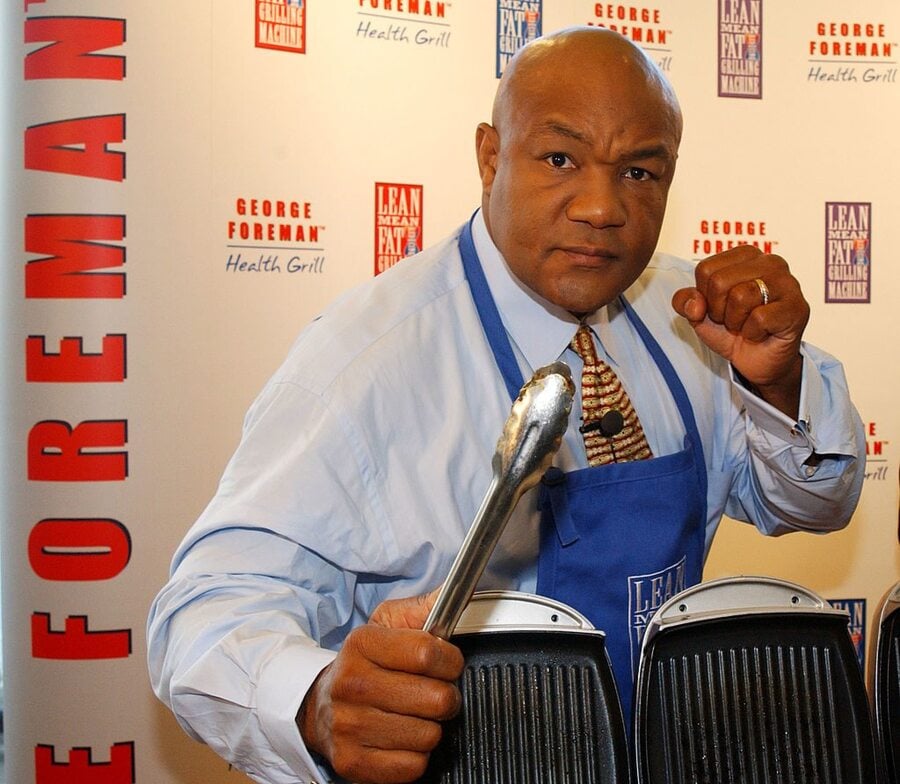 George Foreman was born on January 10, 1949 in Marshall, Texas. His younger years were difficult at times and at 15 he dropped out of high school to get a job to help his family. When he wasn't busy at work, George trained as a boxer. At 19 he was chosen to represent the United States in Mexico City at the 1968 Olympic Games. He brought home the gold.

After racking up an amateur record of 22 and 4, George turned pro in 1969. Over the next three years, George went on an impressive 32 and 0 streak, with 29 wins by knockout. This record put him squarely in position to challenge the then-undefeated Smokin Joe Frazier. Their fight, which became known as the "Sunshine Showdown" took place on January 22nd, 1973 in Kingston, Jamaica. Foreman knocked Joe down six times in the first two rounds alone. On the sixth knockdown, ringside announcer Howard Cosell made the now-famous call:

On October 30, 1974, the undefeated (40 and 0) Foreman lost for the first time in his professional career to none other than Muhammad Ali in the eighth round of a brutal fight. It was called the "Rumble in the Jungle" because it took place in Zaire. Today, the bout is considered by many to be the greatest sporting event of the 20th century. 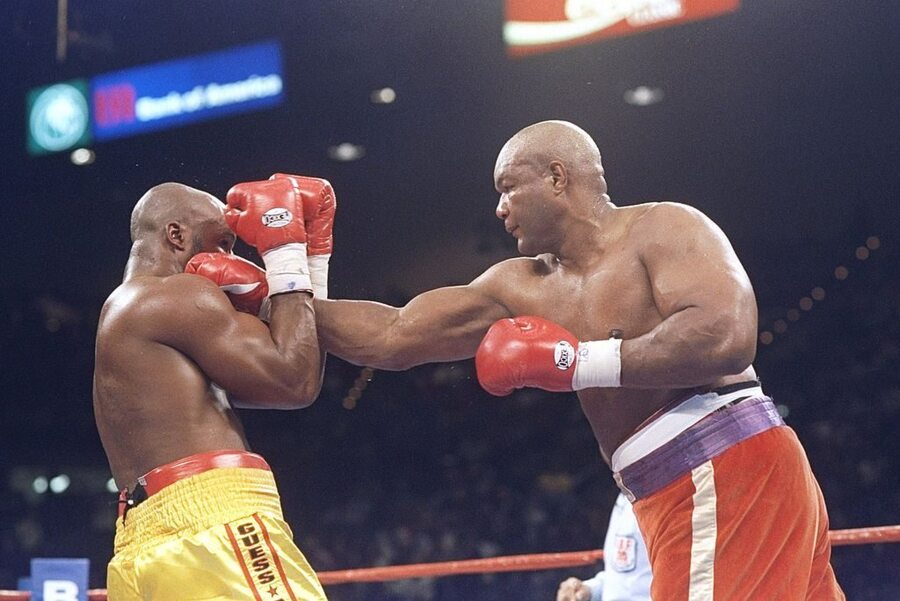 Between 1969 and 1977, George had set aside approximately $5 million from his boxing career earnings. That's the same as approximately $20 million today, after adjusting for inflation. Unfortunately, thanks to a series of bad investments and an overly extravagant lifestyle, by 1987 (ten years into his retirement), George was flat broke. In his own words:

So, in 1987, after 10 years away from boxing, George un-retired. He had no other option. He needed the money, badly. George went on to stage an impressive comeback that lasted through the 1990s. George then shocked the world when he regained the heavyweight championship title in 1994, at the age of 45. All told, George fought in 81 professional fights, winning 76 (68 by KO).

In 1994, George was back on top of the world. Someone else who was on top of the world? Hulk Hogan. At the time, Hulk and George happened to have the same business manager. One day, in early 1994, Hulk met with his agent and was given three options for products to endorse: #1) A grill. #2) A meatball maker. And #3) a blender. Hulk un-wisely chose to the meatball maker, and the failed product was called the "Hulkamania Meatball Maker".

When Hulk decided he did not want to endorse a grill, he casually suggested that his agent give the grill to one of his other clients. According to an interview Hulk gave in 2011, this is exactly how the conversation with his agent went down:

Agent: "What about the other thing? The Grill?"

Hulk: "Ah, give that to your other client." 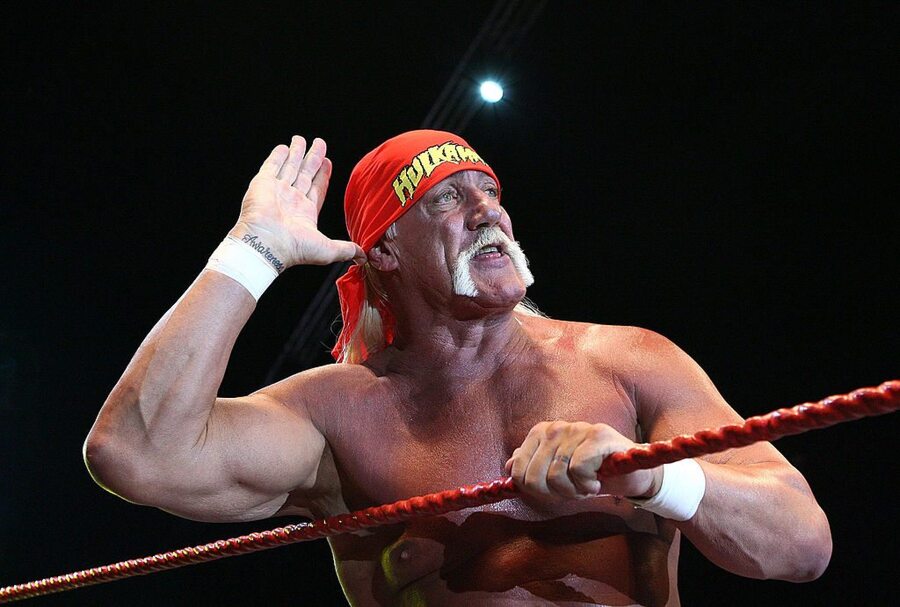 George Foreman was that other client. It didn't hurt that George was famous at the time for eating two hamburgers before every match. George also had been publicly attributing his comeback success to healthy eating habits. It was a perfect match.

For the makers of this newly proposed grill, Spectrum Brands (formerly known as Salton, Inc.), George Foreman turned out to be the perfect spokesperson. He agreed to let the company use his name and face to sell their fat-reducing grill. George also had some ideas about the design, which the company quickly implemented. The grill became known as the George Foreman Lean Mean Fat-Reducing Grilling Machine, but you probably know it more simply as the George Foreman Grill. 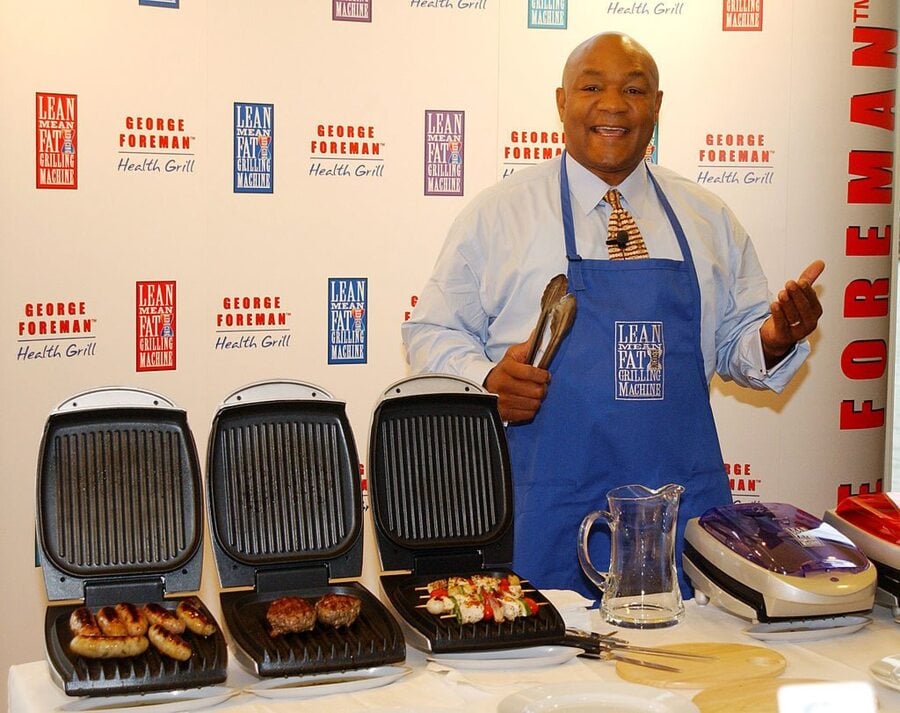 In the mid-90s, the marketing team rolled out a friendly, folksy, gently comic ad campaign starring the boxer. Almost instantly, the grill blew up. Whether you were a college kid on a budget, or a millionaire in the suburbs, everyone wanted one.

Initially, George was paid 40% of the profits from the sale of each grill. Over the years, the George Foreman Grill has sold over 100 million units worldwide.

So How Much Money Did George Make?

In a newly released interview with AARP (the American Association of Retired People), George was pointedly asked about his grill earnings. Here's how the conversation went down:

AARP: "Estimates are that you earned in excess of $200 million on the grill. True?"

George: "Much more. There were months I was being paid $8 million per month."

If that's not amazing enough, in 1999 the makers of the grill realized that it might simply be easier to pay off their spokesperson for a lump sum. So, the company paid George a staggering $138 million lump sum in order to buy the rights to use his name on their grill in perpetuity. Between the monthly royalties and the buy-out, George personally pocketed a minimum of $250 million from the grill.

George shows no signs of slowing down even though he is technically at the standard retirement age and has a personal net worth of $250 million. And why should he retire? His career and health are as strong as ever. And who knows, maybe a future generation of people will know George for something entirely different that hasn't even happened yet. If anyone can do it, it's George Foreman!