By Mark Kurlyandchik on May 8, 2019 in Articles › Entertainment

It was the summer of 1965 and the University of Florida "Gators" football team was feeling the effects of the southern heat. It was so hot, not a single practice would go by without at least one player passing out from heat exhaustion. Desperate for a solution, Assistant Coach Dwayne Douglas and Head Coach Ray Graves made a special request to researchers at the school's College of Medicine. They wanted to know what was causing the heat-related illnesses of athletes working in the hot climate. They didn't know it then, but this simple request would eventually lead to the creation of the most commercially successful sports drink of all time. A drink that continues to spawn countless imitators and generates $3.3 billion a year in revenue. Of course, we are talking about what has become the official drink of the NFL, NBA, MLB, NHL, MLS and even Professional Volleyball: Gatorade. To top it all off, not only did the school serve as the birthplace of this incredible product, even today the University of Florida continues to collect boatloads of cash from royalties related to the sale of their namesake beverage. This story is pretty great.

As anyone who has visited Florida in the summer will attest, it can be excruciatingly hot. Not just hot (90-95°F), but insanely humid and sticky. Even if you're not running around in 10 pounds of football gear, you will likely be gushing sweat just walking the 30 feet from your car to the grocery store. So it's completely understandable how this product came to be. After months of research, The University of Florida scientists, led by Dr. Robert Cade, concluded that the reason players were passing out was because they were burning through extraordinary levels of carbohydrates and electrolytes during practice. From this conclusion, the researchers realized a beverage could provide the ideal delivery system for replenishing carbs, water and electrolytes because it would be fast–ideal for players on the sidelines of a football game. And while you're inventing a beverage, you may as well try and make it taste good!

Early versions of Gatorade were made up of water, sodium, sugar, potassium, phosphate, and lemon juice. Ten players tested the beverage during games and practices, and it appeared to solve the problem. At first, the drink was called called "Cade's Cola," then "Cade's Ade," and then some brilliant, yet forgotten player, made the now obvious leap to "Gatorade."

Gatorade received its first big test during the 1965 season in a game against the LSU Tigers. It was a particularly scorching day when temperatures in Gainesville peaked at 102 degrees. During the second half, the LSU players began to slowly shutdown and fade, but the Gators were still running strong. At this point, Head Coach Ray Graves was convinced Gatorade worked, and he asked that Dr. Cade produce mass quantities of the drink for every game for an indefinite period. Two years later, the team even claimed that Gatorade was responsible for their first Orange Bowl win in 1967 against the Georgia Tech Yellow Jackets. When asked what contributed to his team's loss, Yellow Jackets Coach Bobby Dodd admitted, "We didn't have Gatorade. That made the difference."

Quickly following the 1967 Orange Bowl, Dr. Cade patented the formula and took the first steps to market his product commercially. Initially, he approached officials at The University of Florida and offered to relinquish all Gatorade rights to the school if they helped him mass market and produce the drink. Dr. Cade was seeking to sell the full rights to his creation for the nominal amount of $10,000. That's $75,000 after adjusting for inflation. The school declined. So Dr. Cade partnered with a canned-food packing company called Stokely-Van Camp to produce and sell Gatorade commercially. Later that same year, the National Football League made Gatorade its official sports drink. Sales began to explode. 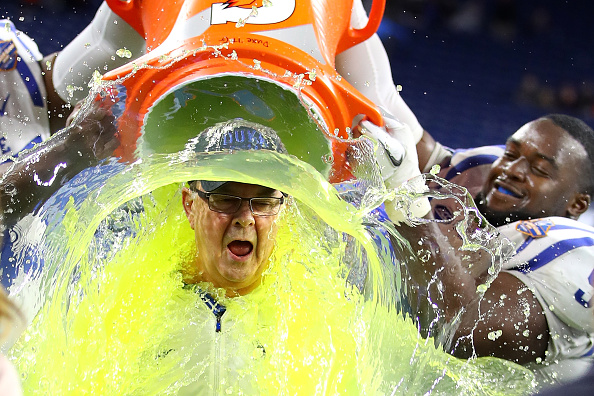 As Gatorade began to reach success on a national level, The University of Florida quickly regretted their decision to decline 100% of the rights. The Florida Board of Regents, which governed the state school system at the time, approached Dr. Cade and requested to have their rights returned. He flatly refused. The Board of Regents, politely reminded Dr. Cade that when he invented Gatorade, his entire team was technically working under Federal grants funded by the U.S. Department of Health, Education and Welfare. Dr. Cade refused again which prompted the Board of Regents, in partnership with the state attorney's office in Tallahassee, to file a lawsuit.

After a very bitter three-year legal battle, the case was finally settled in 1972. The settlement allowed Dr. Cade and some other early partners to keep the majority of the rights, while also giving the University of Florida a 20% stake in Gatorade profits going forward. This is how the Gatorade Trust was born.

Interestingly, once the legal battle was over, Florida invested $42,000 out of their first $70,000 royalty check into a kidney research project headed up by Dr. Cade's renal department. I guess both parties considered the three-year war over Gatorade to be water under the bridge!

Over the ensuing decades, the brand has experienced exponential growth and has had multiple owners. In 1983, Quaker Oats purchased Gatorade's parent company, after a bidding war with Pillsbury, for $220 million. Quaker Oats was instrumental in first expanding the reach of the sports drink by bringing it across international borders to Canada, Asia, South America, Europe, and Australia. The international expansion proved quite fruitful, prompting double-digit sales growth. In 2001, PepsiCo bought Quaker Oats for $13 billion (Gatorade was Pepsi's primary acquisition target in the transaction). This acquisition gave Gatorade yet another new home, plus a nearly unlimited marketing budget and access to a distribution network that spanned 80 countries.

As we all know, today Gatorade is one of the most popular drinks and most famous brands in the world. Over the last 20 years, Gatorade has swallowed up more than 80% of the sports drink market and is now one of PepsiCo's most valuable assets. Along the way, The University of Florida has benefited greatly from their 20% royalty stake through the Gatorade Trust. It is estimated that since 1973, The Gatorade Trust has earned more than $250 million in royalties for the University of Florida. These royalties, which are tax-free because the school is a non-profit organization, have allowed the school to invest in dozens of new research programs and to fund endeavors like the on-campus Genetics Institute. According to GatorSports.com, that 20% royalty stake provides an annual windfall of about $12 million for the University.

Fun fact: Owning 20% of the royalties doesn't actually mean that The University of Florida gets an unlimited free supply of Gatorade for their athletes. Every year, the University spends $60,000 to purchase 21,000 gallons of Gatorade for its athletes to consume during practice, training, and games. I wonder if that includes club sports like the competitive cheerleading squad?

As for Dr. Robert Cade, once the bitter lawsuit was settled, he really didn't hold much of a grudge against The University of Florida. After personally cashing out an estimated $100 million from the $220 million Quaker Oats acquisition in 1983, Dr. Cade spent the remaining 25 years of his life as a professor emeritus of nephrology (study of the kidney) at the University. He was also instrumental in creating a philanthropic branch of Gatorade which today delivers thousands of free bottles to third world countries every year to help fight dehydration. Though he lived his entire life in the same six bedroom Gainesville house he bought in 1965, Dr. Cade did use his wealth to indulge one unique passion: Rare vintage Studebaker automobiles. By the time Dr. Cade died in 2007, his collection contained more than 100 Studebakers.

As of this writing, the families of the four doctors who were involved in the invention of Gatorade (including Dr. Cade) have earned approximately $600 million in royalties from the various trusts established for their benefit.

Just seven months before his death (ironically from kidney failure), Dr. Cade was inducted into the Florida Athletics Hall of Fame. His induction was capped, appropriately, when a group of fellow professors dumped a cooler of Gatorade over Dr. Cade's head. No joke. That actually happened. He was 79 years old at the time.