By Brian Warner on January 21, 2018 in Articles › Entertainment

It's probably safe to bet that the average person reading this article earns a living by working a job that requires 8-10 hours of effort a day, five days a week, all year round. You might love your job. You may hate your job. You might not care about your job at all. Either way, it's probably another safe bet that your money comes in the form of a paycheck twice a month that somehow always feels too small. There's nothing wrong with this system, but imagine an alternate world where a ton of money magically appears in your bank account every day before you even get out of bed. Sounds amazing right? Well it gets better. Imagine not only did you earn this fortune in the last year, you've earned it every year for the last 30 years and will likely earn the same amount or more for the next several decades. If you want this dream scenario to be reality, there's a simple way to make it happen: All you gotta do is compose one of the most lucratively sampled pop songs in history. This is exactly what Sting did with the hit 1983 song "Every Breath You Take".

Sting's classic ballad about an unhealthy obsession with a lost love, was one of the biggest hits of 1983. The song spent eight weeks at #1 on the Billboard Hot 100 and has been played on the radio tens of millions of times. In 2008 Billboard ranked "Every Breath You Take" at #25 on their list of the top 100 songs of all time. But the recording process wasn't exactly a fun experience. During recording sessions at a studio on the island of Montserrat, the band members were literally at each other's throats. Arguments and physical fights were commonplace. 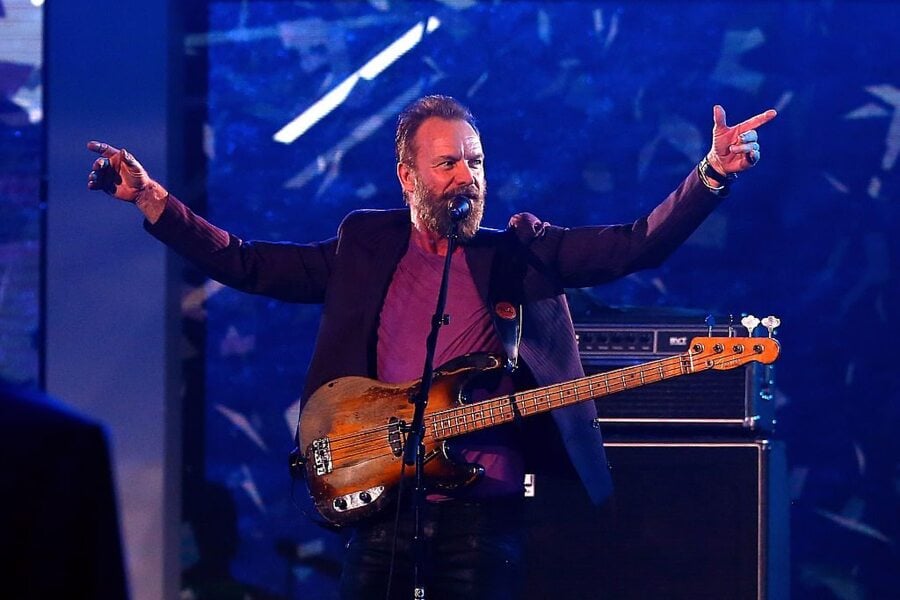 Songwriting for "Every Breath You Take" is credited 100% to Sting (credit by his birth name, Gordon Sumner). Sting took all the credit despite the fact that both fellow Police members Stewart Copeland and Andy Summers contributed to the song (drums and guitar riff, respectively). Andy Summers came up with the song's guitar riff after a particularly bitter argument with Sting. Sting eventually conceded and told Andy "go and make it your own". When Andy came back with an early formation of the now-famous guitar lick, the band knew they had a hit on their hands. Unfortunately, Andy Summers never pushed for his share of the song's credit.

As the song's sole composer, Sting earns the vast majority of royalties when the song is played on the radio, sampled or included in something like a commercial or a movie. This fact alone should have been enough to make Andy Summers and Stewart Copeland furious in the early to mid 80s. But at some point they probably stopped losing sleep over their loss. Then came Puff Daddy.

In 1997, "Every Breath You Take" received a huge re-boot in popularity when Puff Daddy released his cover tribute to the late rapper Notorious BIG. Puff Daddy's version, "I'll Be Missing You", would go on to win a Grammy and be certified as one of the bestselling singles of all time with more 7 million copies sold worldwide.

Unfortunately for Diddy, no one from Bad Boy Records (Diddy's label) thought to secure Sting's permission to sample the 1983 pop song for the updated 1997 remix. Had Diddy asked permission first, he likely would have been required to hand over 25% of I'll Be Missing You's publishing royalties to Sting. By forgetting to ask permission before the song was released, Sting was able to demand and receive 100% of the remix's publishing royalties.

Here's where it gets really interesting: Think about Puff Daddy's version of the song. Do you hear Sting's voice at all? Nope. Do you hear Steward Copeland's drums? Nope. The only part of the original Police song that Diddy actually sampled turned out to be Andy Summer's guitar riff. And as crazy as it sounds, because Sting is listed as the sole composer, Andy Summers does not receive a dime in royalties from Diddy's smash hit version. In fact, Summers was not even aware of the song's existence until his son heard it on the radio and thought it was The Police. In an interview with The A.V. club, Summers explained how he found out about "I'll Be Missing You":

"It was actually my kid, who was 10 at the time, said, 'Hey dad, there's some girl on the radio who's playing you guys!' I went into his room and listened to his radio, and I was like, This is me, what the fuck is this?"

Andy went on to describe Puff Daddy's song as "the major rip-off of all time". "He actually sampled my guitar… that's what he based his whole track on. Stewart's not on it. Sting's not on it. I'd be walking round Tower Records, and the fucking thing would be playing over and over. It was very bizarre while it lasted."

Even after 16 years, Andy Summers is still understandably bitter about what happened with "Every Breath You Take". I'd be bitter too if I knew how much Sting was earning off the song still. In 2010, Sting's former business manager claimed that "Every Breath You Take" is responsible for more than 1/4 of all the singer's lifetime publishing income, somewhere in the range of $20-$40 million. On top of that, the song produces an average of $2000 in royalty income for Sting every day ($730,000 per year).

Under British copyright law, Sting, or his heirs, will earn royalties from the song  until the year 2053 (70 years from the moment of copyright). Sting will be 102 years old in 2053. Also it should be noted that royalties don't actually magically appear in your bank account every day as we alluded in the first paragraph. Most artists receive their royalty income in the form of quarterly direct deposits, administered by a non-profit performance rights organization like The American Society of Composers, Authors and Publishers (ASCAP).

In an April 2000 interview that featured all three Police members, "Every Breath You Take" was discussed and it was clear that emotions were still unresolved:

Summers: At that point we were in a really gnarly state as a trio. We had sort of reached the end of our rope.

Copeland: Our golden goose was cooked. We were at each other's throats.

Summers: We spent about six weeks recording just the snare drums and the bass. It was a simple, classic chord sequence, but we couldn't agree how to do it. I'd been making an album with Robert Fripp, and I was kind of experimenting with playing Bartok violin duets and had worked up a new riff. When Sting said 'go and make it your own', I went and stuck that lick on it, and immediately we knew we had something special.

Copeland: Yeah, Sting said make it your own – just keep your hands off my f***in' royalties. Andy, since we're here, I'm going to back you up on this. You should stand up right now and say, 'I, Andy, want all the Puff Daddy money. Because that's not Sting's song he's using, that's my guitar riff.' Okay over to you Andy, Go for it…

Summers: [meekly] Ok, I want all of the Puff Daddy Money.

Sting: Okay Andy here's all the money [pours some change on the table]. Unfortunately, I've spent the rest of it.

Copeland: So Sting's making out like a bank robber here, while Andy and I have gone unrewarded and unloved for our efforts and contributions.

Sting: Life… is… fucking… tough. Here I am in Tuscany…

Copeland: And don't we know it! You're in Tuscany in your palace with wine being poured down your throat and grapes being peeled for you. Sting can you buy me a castle in Italy too? With the proceeds from the longest running hit single in the history of radio? Just a little chateau somewhere?

Sting: We don't have fucking chateaus in Italy, They're called palazzos. I'll lend you a room.