By Brian Warner on September 30, 2021 in Articles › Entertainment

One week ago we reported on the story of a Mexican TV host Inés Gómez Mont who, along with her husband, was allegedly on the run after being declared a fugitive by the Mexican government. Their purported crime? Embezzling 3 billion pesos from the Mexican Ministry of the Interior. FYI, 3 billion pesos is equal to around $146 million.

If even remotely true, it's a stunning story, made even more salacious because Inés and her husband may be hiding out in Miami.

From what I can tell, prior to last week Inés Gómez Mont was basically unknown even in Mexico. She appears to be a fairly obscure periodic TV host/sideline reporter. Her only major headline came in 2008 when she wore a wedding dress to a press event ahead of Super Bowl XLII and loudly begged Tom Brady to marry her.

Here's a video of their exchange and a photo from later that day: 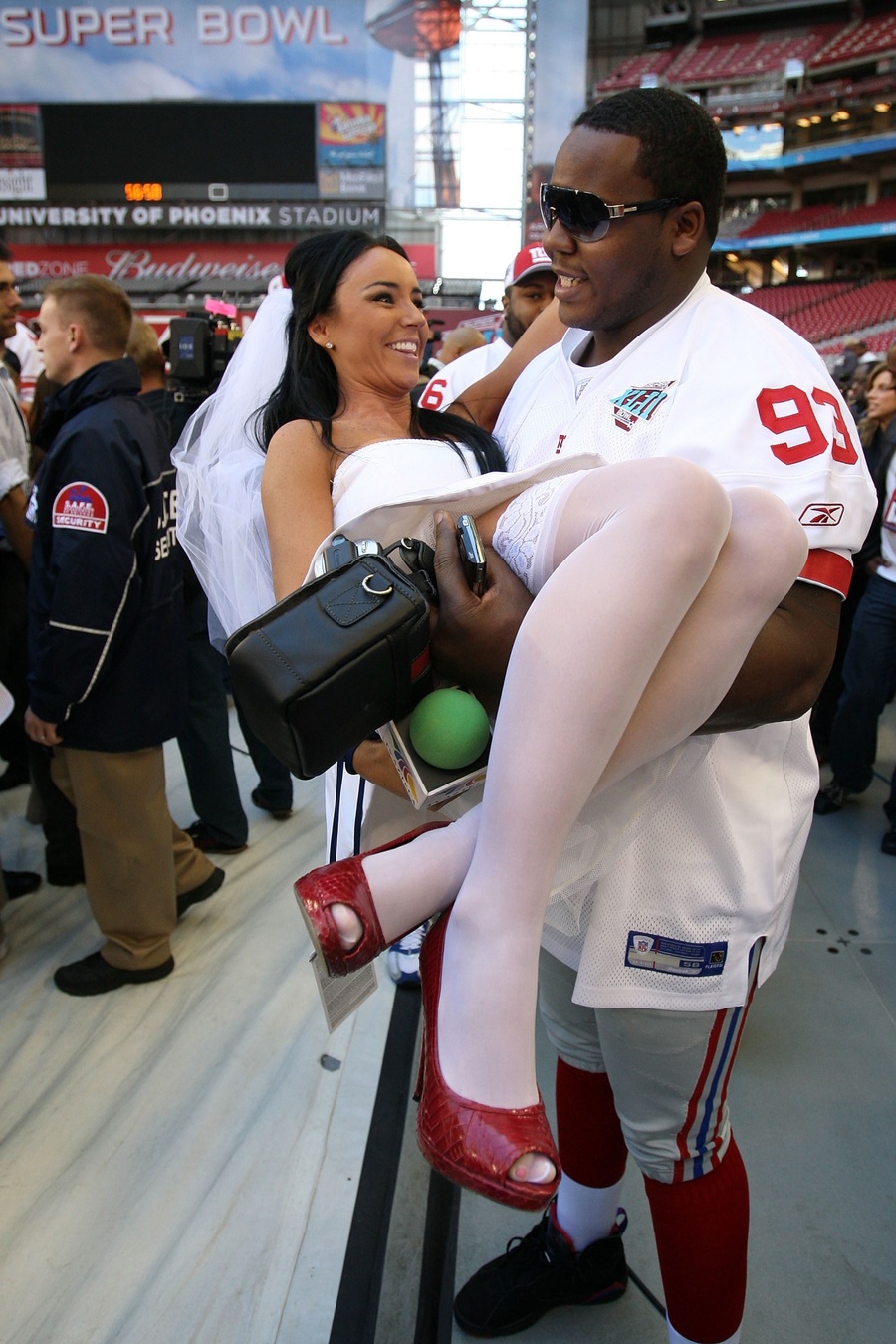 Some details that were not clear last week have now been released.

According to Mexican criminal justice authorities, between 2016 and 2017 Inés and lawyer husband Victor Alvarez Puga allegedly used a company called Inteligencia Cibernetica to filter 3 billion pesos from Mexico's Ministry of the Interior through a series shell corporations then did not provide any services. Allegedly. According to reports this week, Inteligencia Cibernetica was supposed to provide electronic security systems at seven Mexican prisons.

According to a court document, those services were never rendered:

"…However, that did not happen, as the equipment never reached the prisons being that the (ministry) officials diverted the money to the aforementioned company in a corrupt and illegal way (and) being that it had to be used for improvements in the security of the prison system."

Again – according to the court documents – the couple used several other reportedly "bogus" companies to create invoices for security services that were never actually rendered.

The couple was apparently just charged with misuse of public funds, organized crime and operations with resources of illicit origins. A Mexico state judge approved arrest warrants for the couple and 10 former officials who were also allegedly part of the scheme.

Inés and Victor, who have not been seen since September 10, could face 20 to 60 years in prison a piece if they are captured and convicted.

Inés Gómez Mont just came out swinging against the charges. Here is her full statement which was posted to Instagram:

"I have been silent for a few days to try to understand the facts attributed to me and to focus on my defense. Despite not having access to the file, I want to emphasize that I am innocent and have not committed any crime.

Indeed, according to the press, the authorities accuse me of allegedly having received money from two public contracts (totaling 3 billion pesos) and of belonging to organized crime. Those facts are absolutely false. That is, without any justification they place me on the same level as a drug dealer or terrorist. It seems to me an injustice.

To be clear, I have never stolen a peso. Nor have I received money from those contracts, much less have I seen or had 3 billion pesos in my life. I'm a full-time mom and TV host. And under no circumstances do I belong to organized crime.

I also have well-founded fear that derived from this statement that the authorities in charge of my case will be even more cruel against me, since I have been warned of more cases fabricated against me. But I can't keep silent anymore. On the contrary, I will continue to work with my legal team to be able to defend myself and always honestly share the details of my case with them.

To everyone who knows me and who I am, thank you for your support and love.

To those who do not know me and have heard premature judgments against me, I respectfully ask for your vote of confidence.

I know who I am. For myself and my children, I will demonstrate my innocence with dignity and I will not keep silent. I repeat: I am innocent and this is an injustice.