From The Front Lines Of The L.A. Protest Over George Floyd's Death

By Amy Lamare on June 1, 2020 in Articles › Entertainment

(Editor's note. This is obviously not a standard "Celebrity Net Worth" article, but our writer Amy was in the middle of the protests all weekend in Los Angeles and wanted to write about what she experienced. These are her thoughts and observations)… As many of you know, the U.S. has broken out in protests about the senseless death of George Floyd in Minneapolis. Police officer Derek Chauvin kneeled on his neck for more than five minutes and killed, no murdered, him, despite his pleas for help and the assembled crowd around Chauvin and Floyd pleading with the police officers to lay off. On Saturday, May 30, 2020, a massive protest against not just his killing but the senseless killings of Trayvon Martin, Breonna Taylor, Eric Garner, Sandra Bland, Michael Brown, Atatiana Jefferson, and far too many other beautiful black lives– was organized in the Fairfax District of Los Angeles. I live there. It started at Pan Pacific Park with a kneel-down Colin Kaepernick style to honor all the black lives loss to police brutality and senseless racism.

I was out walking my dog around noon when the protest was marching west on Beverly Blvd. And I can attest that it was 100% peaceful. It continued to be peaceful until the LAPD showed up and exhibited unnecessary police violence against the crowd. The crowd on Beverly Boulevard at Fairfax Avenue was peaceful, energized, friendly, and determined. As I wrote an article from my office with a window overlooking the alley, I took the time to open the window and let the young people walking towards the protest know they matter, ask them to be safe, and offer them bottled water.

Then my phone started blowing up because my apartment building was on the news and not just the local news — it was on CNN. The LAPD arrived and immediately started firing rubber bullets into the peaceful crowd. They deployed tear gas. One block south of me on West Third Street the front line of protesters had their arms linked while people behind them had their hands up and the LAPD started beating them with their batons. Later that afternoon, I talked to a man who had been in that front line and he confirmed what I feared, that the protesters were attacked before any other method to diffuse the situation or ask the protestors to disband.

I decided I had to get out and document what was happening. The sad fact is that the LAPD has a long history of racism and brutality. Remember Rodney King? I could not, as a supporter of the Black Lives Matter movement and a journalist, simply observe what was happening from my living room windows. I grabbed an extra battery for my iPhone and headed downstairs to the center of the protest and the line in the sand the LAPD had drawn. In other words, I walked about 15 feet.

A police SUV was on fire on Fairfax right by the gas station on that corner. I went live on Facebook to report on what was happening. The protesters were peaceful. The police were agitating and inciting the violence. I ran from the firing of rubber bullets a number of times. I was there. I was in the thick of it. The LAPD 100% escalated the protest from peaceful to violent. 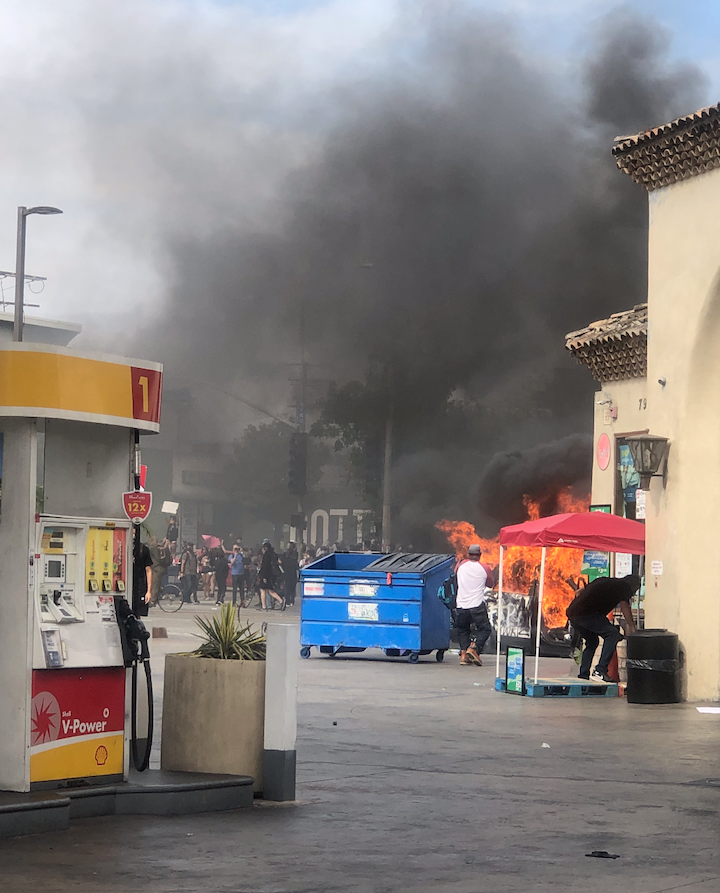 The fact of the matter is that we have a deep history of systemic racism in the United States. The rate at which black Americans are killed by police is more than twice as high as the rate for white Americans. The parents of black and brown children have to have difficult conversations with their sons and daughters about how the world perceives them and the extra care they have to take in their behavior and where and when they go places because of the color of their skin.

Black lives matter. Colin Kaepernick tried to tell Americans this with his peaceful taking of a knee during the National Anthem at NFL games. Conservative Americans went nuts. Kaepernick's NFL career was cut short because of his peaceful protests. The fact of the matter is that the experience of black and brown people in the United States is different from that of white people. And why? A person cannot help what color skin they're born with any more than they can the color of their eyes. People are people underneath our skin, regardless of color, race, gender, sexual orientation, or religion.

The Black Lives Matter movement is needed because black Americans are dying at alarming rates in situations where white people would be given a slap on the wrist. Breonna Taylor, an EMT, was asleep in her Louisville apartment on the night of March 13, 2020, when police busted into her apartment unannounced looking for a suspect—one that, by the way, lived at another address more than 10 miles away, had no ties to Breonna and was already in police custody – and shot and murdered Breonna. She was 26-years-old. She was shot eight times. She was a graduate of the University of Kentucky. She worked for the University of Louisville Health. Say her name. She did not deserve to die.

Back here in L.A. on May 30, I tried to move people out of and away from the gas station. The SUV was fully engulfed in flames, ammunition in the vehicle was going off as the fire hit it. I worried that the whole SUV would blow up and trigger a massive fire at the gas station. Fortunately, the LAFD got to the scene and extinguished the fire just in time. The LAPD continued to disperse teargas and fire rubber bullets into the crowd. Some enterprising protestors commandeered dumpsters to hide behind to avoid the rubber bullets. All the protesters wanted was for their voices to be heard. All our black friends and family are trying to tell us and have been trying to tell us is that they want to be heard.

The protest moved slightly west and the LAPD once again drew a line in the sand. Most of the protesters sat on the ground sit in style. Others took a knee and raised a fist in solidarity. The protesters were mostly young (in their 20s), and a pretty even mix of black, white, and Asian Angelinos. There was a lot of kindness and love and connecting with fellow humans amongst the protestors. By 6 pm or so the crowd had mostly dispersed. There was a heavy police presence. The photo below was taken at 7:45 pm on Saturday night from out in front of my building. 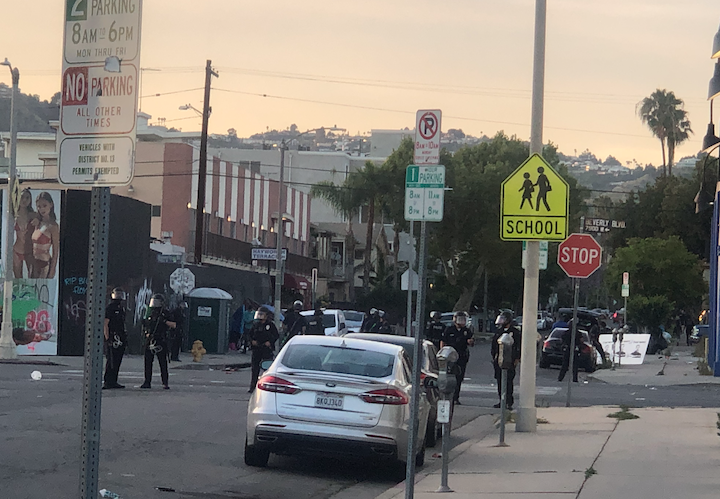 The Fairfax District of Los Angeles was a war zone for a good 18 hours. There are a lot of burnt-out businesses. It will take a long time to rebuild. I had to be a part of the history that was unfolding right outside my windows. I could not say I support the Black Lives Matter movement and be an observer, let alone be a journalist, and not document what was happening. And I wanted to make sure, should anything go sideways, I had video evidence of it. I was not going to be an idle witness to the death of another black person at the hands of a police officer. That is the driving thought that sent me outside into the middle of it. I might not be able to prevent it, but I'd have the video that would convict the murderer.

White people, we have to do better. We have to shut racism down when we come across it. There are no more passes for your racist uncle or grandparent. There's no time for nervous, uncomfortable laughter in the face of racism. I don't care if it is uncomfortable. We cannot shove it under the proverbial rug anymore. We must stand up for and stand next to our black brothers and sisters. Their very lives depend on it.

The lives below have been lost to police brutality. All of them were black. Most of them were just going about their daily lives when they were murdered. Two women were asleep in their beds when they were murdered by police officers. One woman was babysitting her beloved nephew who she loved playing video games with. Another man was on his way home with his girlfriend from a dinner date. One man was eating ice cream in his living room. All things people do every day. Only white people don't lose their lives for these activities. Black people do. This must stop.

Eric Garner had just broken up a fight.

Ezell Ford was out for a walk in his neighborhood.

Michele Cusseaux was changing the lock on her home's door.

Tanisha Anderson was having a bad mental health episode.

Tamir Rice was playing in a park.

Trayvon Martin was shot and killed by a neighborhood watch volunteer.

Natasha McKenna was having a schizophrenic episode when she was tazed and killed.

Walter Scott was going to an auto parts store.

Bettie Jones answered the door to let Chicago police officers in to help her neighbor who had called 911 about a domestic dispute.

Philandro Castile was on his way home from dinner with his girlfriend.

Botham Jean was eating ice cream in his living room.

Atatiana Jefferson was babysitting her nephew at her home.

Eric Reason was pulling into a parking spot of a restaurant.

Dominique Clayton was asleep in her bed.

Breonna Taylor was asleep in her bed.

But they aren't the only ones.