Friends Thought He Was Crazy To Give Up A High Paying Job To Launch A Brewery. Today Jim Koch Is A Billionaire.

By Amy Lamare on April 5, 2018 in Articles › Entertainment

Jim Koch has beer running in his blood. He is actually a sixth generation brewer who he got his start in his own Newton, Massachusetts kitchen brewing the concoction that would eventually come to be known to millions as Sam Adams Boston Lager. Today's Sam Adams is based on a 150 year old recipe that had been gathering dust in his father's attic. But Jim Koch didn't set out to be a brew master or start what is arguably the best known craft beer on the planet. There was a time when Jim was living a fat and happy life as a highly paid corporate consultant. He had a cushy six figure job and a great career ahead of him. Then, at 35, Jim shocked his friends and family when he decided to give it all up… to follow his dreams. This turned out to be a very wise decision.

Jim Koch (pronounced Cook) was born in 1949 and grew up just outside of Cincinnati, Ohio. His father was a fifth generation brew master. Jim was supposed to be the sixth oldest-son in the Koch family to enter the beer business but by the time he came of age, the domestic beer business was on life support. Even decades later, the domestic beer industry was still reeling from the after shocks of Prohibition. Between 1920-1933, brew masters (and other alcohol distillers) were not legally allowed to produce or sell beer in the United States. Even after Prohibition was lifted, grain rationing during World War II changed the public's taste from richer-flavored small batch beers, to more watered down, lighter beers. During the 1960s, the U.S. beer industry rapidly consolidated into the hands of a few mega-brewers. When you added it all up, Jim's prospects as the sixth generation Koch microbrewer were not looking good. Jim's own father discouraged him from following in the family footsteps because he felt giants like Budweiser would be impossible to beat.

So instead of learning the beer business, Jim headed off to Harvard. After undergrad, Jim stuck around Harvard to earn an MBA and JD. But before finishing from his graduate studies, Jim realized he didn't want the traditional life he had just set spent years setting himself up for. He dropped out of business school and went to work at Outward Bound, a nonprofit expedition school, as an instructor. He spent the next three years teaching wilderness travel, mountaineering, and whitewater rafting. It was a long way from the Harvard combined MBA-JD program he'd walked away from. 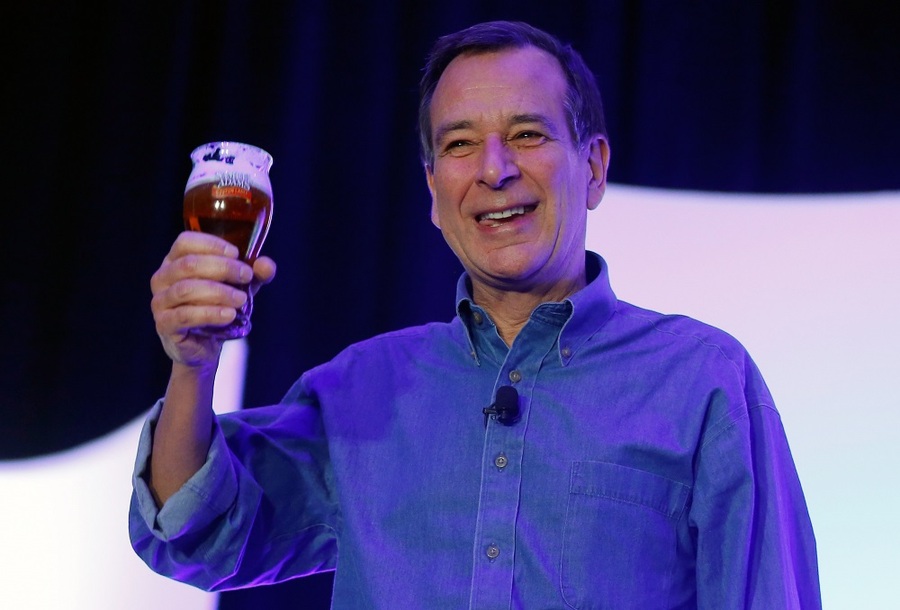 After those three years, Jim returned to Harvard to finish grad school. He graduated in 1978 and became a consultant for the highly esteemed Boston Consulting Group. As a consultant, Jim settled into a cushy life and advised pulp and steel mills on manufacturing processes.

Now you can imagine that a guy who dropped out of Harvard grad school to teach mountaineering might not be satisfied by this cushy consulting life for very long. After five years consulting, Jim decided he needed a change. And not just new job, but a new career. A new industry. A new life. Jim shocked friends and family when he announced his intention to pursue his frosty passions. He was 35 years old and earning well over six figures every year, with plenty of opportunities for corporate advancement and relatively little stress. But Jim gave it all up. That takes guts!

After leaving Boston Consulting Group, Jim began to tinker with different recipes right out of his kitchen. The Boston Beer Co. was started in that very same kitchen at a time when there were only about a dozen craft brewers in the entire country. There are over 2500 craft brewers in the United States today. Jim quickly put his Harvard MBA to work and wrote the Boston Beer Co.'s first business plan. His goal was to sell $1 million worth of beer in six years (roughly 5,000 barrels of beer). He planned on having a total of eight employees, and he would pay himself a yearly salary of $60,000.

Jim asked his father for the family's best beer recipe. His father spent a weekend digging in the attic and eventually found a recipe that had been gathering dust for decades. The recipe dated back to the 1860s from Jim's great-great grandfather, Louis Koch. That recipe became the basis for Boston Lager. Jim soon hit upon a genius marketing idea: Naming the company's main brand "Samuel Adams". The real Sam Adams was a Boston-born, Harvard educated Revolutionary War hero. He was one of the Founding Father's of the United States who helped write and eventually signed the Declaration of Independence. Sam Adams was also a brewer.

Jim went door-to-door, or rather bar-to-bar, with his beer samples, convincing bar owners and restaurant food and beverage managers to carry his beer. His business and marketing savvy coupled with his folksy manner (on display in the brand's commercials) helped him pave the way to success for his fledgling craft beer. Within a year, Koch's home brew was named the country's best at a national brewing festival.

This marketing plan worked extremely well. Keep in mind, Jim's goal was to sell $1 million worth of beer within six years. In the sixth year, The Boston Beer Company actually sold $21.2 million worth of beer. After passing the 10 year mark in 1994, that figure grew to $128 million.

The Boston Beer Co. went public in 1995 on the New York Stock Exchange. The IPO offered shares at $20. Some lucky Sam Adams drinkers actually found offers in six packs that allowed them to buy their stock for $15 a share. Can you imagine? As of this writing, The Boston Beer Company, under the appropriately chosen ticker symbol "SAM", trades at $243 per share. That's a 1115% increase in under a decade. At today's share price, the company has a total market cap of $3.13 billion.

Impressively, even after nearly three decades, Jim Koch has managed to retain 1/3 ownership of his company. Therefore, when the stock price topped $225 in September 2013, he officially became a beer making billionaire. At today's share price, Jim is worth just slightly under $1.1 billion.

The success of Koch's Boston Lager has helped the American craft beer scene grow by leaps and bounds. American sales of craft beer have grown at least 10 percent a year for each of the past seven years. Remember, when Jim started out there was just about a dozen craft breweries in the US. Now there are more than 2,500–the most there have been at any time since at least 1887, according to records kept by the Brewers Association. Today Sam Adams is one the most recognizable beer brands in America. It is as recognizable as the brands put out by huge beer conglomerates like Anheuser-Busch InBev and SAB MIller.

When Jim Koch started Sam Adams, his dream was to some day sell 5,000 barrels of beer and have eight employees. Today the company brews 3 million barrels and employs around 800 people. Since founding Boston Beer Co. in 1984, Koch has continually grown his product offerings, beer varieties, and networked relentlessly for the best distribution. He has proven that brewing high-quality beer can be a good business model if done right.

Today, 64-year old Jim Koch has one billion reasons to raise a glass of his now famous craft beer. He is actually the first person in history to make a billion dollars off craft beer. Armed with his family recipe, three Harvard degrees (and the intellect to go with them), Koch popularized craft beer in the United States and turned his Boston Beer Co. into the third largest American-owned brewery.

He knew a traditional job and career were not for him but he gave it a brief try anyway before following his passion and starting The Boston Beer Company. Once again, if you have something you're passionate about – find a way to make lots money off of it and you'll never grow tired of your job. Actually, you'll never even consider it a job at all!