By Amy Lamare on September 3, 2014 in Articles › Entertainment

Director Francis Ford Coppola has given us unforgettable cinematic classics like The Godfather Trilogy, The Outsiders, Apocalypse Now, and Patton. He is an Academy Award winner, a well-respected writer, director, and producer. He is the patriarch of what is arguably Hollywood's most successful family. Nicolas Cage is his nephew. Director Sofia Coppola is his daughter. Actress Talia Shire is his sister. Actor/musician Jason Schwartzman is his nephew. Outside of acting, Francis also happens to run a massive wine-related business empire. Coppola's journey from Hollywood mastermind to award winning vintner has taken some twists and turns along the way that included multiple bankruptcies. Today he is producing some of California's best known and well regarded wines and he is personally worth $250 million. Here's how it all came to be…

Francis Ford Coppola was born on April 7, 1939 in Detroit, Michigan. He was the middle child of three in a family with Italian immigrant ancestry. His father was a flautist with the Detroit Symphony Orchestra. When Francis was two years old, his dad was named principal flautist for the NBC Symphony Orchestra and the family moved to New York and settled in Queens. This would be where where Francis spent the rest of his childhood with brother August and sister Talia (the future Godfather and Rocky actress now known as Talia Shire). 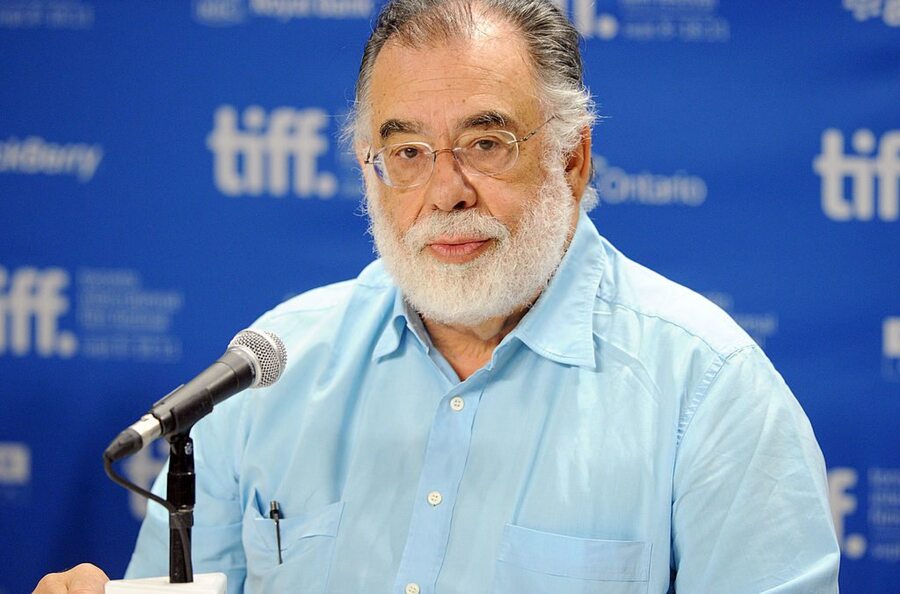 When he was a boy, Francis had polio and spent large periods of his childhood bedridden. This inactivity forced him to indulge is imagination endlessly. When he was healthier, it wasn't long before young Coppola was staging homemade puppet theatre productions.  When he read A Streetcar Named Desire at 15, he became hooked on theater and film.  He started taking home movies and editing the 8 millimeter film into feature films with titles like The Lost Waller and The Rich Millionaire. Coppola graduated from Great Neck North High School and Hofstra College where he studied playwriting. While in college, he was profoundly impressed by filmmaker Sergei Eisenstein's October: Ten Days That Shook The World, and switched his focus to film over stage productions.  Francis Ford Coppola graduated with his Bachelor's degree in Theatre Arts in 1959 and headed to Los Angeles for to get his Master's degree at UCLA's Film School.

The 1970s were Coppola's decade right from the start. He was part of a group of filmmakers including Steven Spielberg, Martin Scorsese, and Terrance Malick (among others) that quickly became known as the New Hollywood. In 1970, Francis earned his first taste of success when he won the Academy Award for Best Original Screenplay for the movie Patton.  In 1972 Coppola won the Academy Award for Best Adapted Screenplay and Golden Globe for Best Director and Best Screenplay for The Godfather.  Interestingly, Coppola did not initially want to direct The Godfather because he feared it would glorify the Mafia and that would reflect badly on his Italian heritage.  In 1974, Coppola won the Palme D'Or at the Cannes Film Festival for his film The Conversation. Also in 1974, Coppola released The Godfather Part II.  The film was nominated for 11 Academy Awards. It eventually won six Oscars, including three for Coppola: Best Picture, Best Adapted Screenplay and Best Director.

In 1972, Coppola and his wife Eleanor started to check out real estate in Napa Valley. They were looking for a summer house – a place where their sons could climb trees and go swimming and where the family could get a respite from their busy lives in San Francisco. Coppola grew up hearing about Prohibition from his uncles over family dinner tables that always included lots of wine. During Prohibition, families were allowed to make two barrels of wine for personal use. His uncles always told stories about how fun it was to steal the grapes to make that wine. So when he and Eleanor began to look for summer houses in Napa Valley, he thought it might be fun to have a house with an acre or two of grapes.

Coppola's real estate agent brought them to see the mansion of Gustav Niebaum, the man who had founded Inglenook Winery in 1879 in Rutherford, California. It would prove to be more than a summer house for Coppola and the eventual purchase of this historic property and vineyard would change his life. But their first offer for the property was refused.

A year later the property was on the market again and using the profits from The Godfather, Coppola bought the Niebaum mansion for $2.2 million.  The purchase included the mansion and the slopes leading up Mount St. John, but did not include the chateau or the vineyards along Highway 29. It would be another 20 years before Coppola was able to buy those, on the long, winding road toward restoration of the estate and establishing himself as a premiere vintner in the California wine industry.

Inglenook was one of the all time great names in Napa Valley. Launched in 1879 by the Finnish sea captain and wine connoisseur Gustave Niebaum, it was, according to an 1889 San Francisco newspaper report, "the California equivalent of Chateau Margaux." The region that the vineyard sits in is considered the greatest region for Cabernet Sauvignon production in California.

However, most people today have identified Inglenook as mass produced, low priced jug wine available in grocery stores for decades. But that isn't the wine's past. The decline started in 1964 when Niebaum's descendants sold the property to companies that treated the rich land it sat on as a cash cow.  Coppola was offended by the degradation of a once great vineyard on some of the best grape growing soil in the world.

But Coppola was a filmmaker, not a winemaker. The learning curve ahead of him to restore this once great vineyard was steep.  Coppola, having pursued purchasing the property for so long, suddenly found himself  with 100 acres of grapes that produced a crop every single year. That's a lot of grapes.

At the time, Coppola's movie career was in trouble. It was around the time of Apocalypse Now, which while highly regarded today, was absolutely savagely ripped apart by the press. Coppola was in deep financial trouble. He and his wife had a hard time even coming up with money for groceries. In fact, Coppola would file bankruptcy three times in eight years in the early to mid 1980s. His personal debts totaled $25 million, which is equal to $60 million after adjusting for inflation. Francis would spend the next 15 years working as a hired gun on pretty much any movie that would help him pay down his massive debts. Some of the movies from this debt-period include Peggy Sue Got Married, Bram Stoker's Dracula and John Grisham's The Rainmaker. They may not have been passion projects, but they kept Francis afloat.

And then an idea began to germinate in Coppola's head.  There was a part of him that looked out at all those grapes, considered the then ruins of his film career, and thought "why don't we just make wine?".  He reasoned that the grapes that grew on the once formidable Inglenook estate had made great wine in the past, so why not try and do that again. Never mind that he didn't have any idea how to go about making wine, Coppola figured he could hire people for that.  And he did. The first Rubicon from the Niebaum-Coppola Winery was released in 1978.  It didn't make it to stores until 1985. Coppola may have made a wine, but he had no idea out to get it into stores and it was just building up in local storage facilities.

Coppola would muddle along as a winemaker (and filmmaker) through the 1980s. The turning point, for both careers came with the box office success of Bram Stoker's Dracula in 1992. This movie ended Coppola's box office dry spell and the money he made on that film paid for the rest of the Niebaum property—the front vineyards and the chateau in 1995.  It was then that Coppola got serious about making wine and hired a professional staff to run his vineyard.

When Coppola purchased the vineyards and chateau, he also got 40,000 cases of wines that the former owner had bottled under the Niebaum Collection brand. The logo was a diamond, which Coppola redesigned and then launched that wine as his mass wine bottled under Francis Coppola and Francis Coppola Presents.

That wine took off immediately.  The first year the Coppola diamond collection wines did $9 million in sales. Four years later they sold $60 million dollars in wine. By the late 2000's, Coppola's wine empire was earning $500 million in revenue per year. The empire now includes wine, pasta, cigars, two restaurants, a hotel, three resorts in central America and more. Today, the vast majority of Francis Ford Coppola's $250 million net worth actually comes from his wine business. Only a tiny percentage is attributed to his legendary film career.

It's not such a stretch for Francis Ford Coppola to be a winemaker.  Filmmaking and wine making are both art forms that can be divided into three phases – the gathering of the source material (grapes and shots of the film), fashioning the work (winemaking and editing) and finishing it (post production and bottling). Nowadays, Coppola is focused on relaunching the classic Inglenook brand name. In April 2012, after many decades the current owner of the brand put it up for sale, offering it first to Coppola. The name cost Coppola more than all of the property for the vineyards had. From now on Coppola's wines will be bottled and sold under the Inglenook name. Coppola is putting Inglenook back on the path to being recognized as one of Napa Valley's great wines.

And he's making a fortune while doing it.