By Paula Wilson on December 14, 2014 in Articles › Entertainment

Very few things can tear a family apart like money. Perfectly logical, seemingly well-adjusted husbands, wives, brothers, sisters, and even cousins, can fly all to pieces over how money should be used, or who should get to control it. These family feuds can be even more of a mess when the family has multiple "arms". Multiple marriages, resulting in multiple spouses, and multiple children, can make the task of dividing an estate into a labyrinthine, messy venture that can take decades to sort out. Take, for example, the story of Rocky Aoki. Aoki, a former Olympic wrestler turned restaurateur, founded the famous Benihana steakhouse chain. For the last six years, his third wife, and two of his children, have gone head-to-head in court. While battles have been won by both sides, the war seems to be far from over.

Rocky Aoki, born Hiroaki Aoki in Tokyo, Japan on October 9, 1938, was initially interested in a career in music. He launched his own rock and roll band, Rowdy Sounds, in Tokyo when he was in school, but it never really went anywhere. Instead, he excelled at sports, going on to compete in Karate, Track and Field, and Wrestling, while a student at Keio University. His temper got the best of him, unfortunately, and he was subsequently expelled from the school. However, his wrestling skills were good enough that he qualified for the 1960 Summer Olympics in Rome, though he chose not to attend. After relocating to the United States, he began to gain notice, winning the U.S. Flyweight title in 1962, 1963, and 1964. He also earned his Associate's Degree in Management from New York City Community College, graduating in 1963. 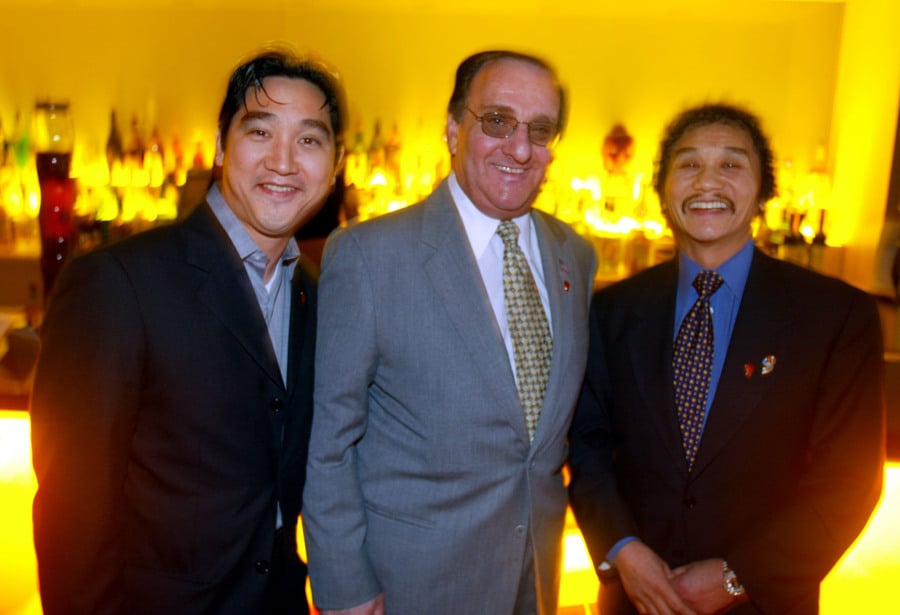 When he wasn't wrestling, he ran an ice cream truck in Harlem. Running the ice cream truck was not his goal in life. He had bigger plans. Using $10,000 he saved from his ice cream business, plus additional funding from his father, he launched Benihana. The first Benihana opened in 1964 when Aoki was 25. It had only four tables and was located on West 56th Street. Aoki's Japanese teppanyaki restaurant differed from others in a unique way. The chef's prepared the food in a highly theatrical style, throwing knives, lighting things on fire, and cracking jokes all the while. Response was tepid the first year, but one rave review from New York Herald Tribune reviewer Clementine Paddleford in 1965, changed everything. Suddenly Aoki's Benihana of Tokyo was the place to be, and everyone wanted a seat at one of its four tables. He began to expand immediately, opening a large restaurant in New York City with a Samurai theme, and then expanding to Chicago. Fast forward to today, and the company, now known as Benihana, Inc., is made up of 116 restaurants spread out around the globe. Benihana, Inc., also owns two other chains, Haru, an Asian fusion restaurant chain, and RA Sushi, a group of sushi restaurants.

Over the years, Aoki became a very, very wealthy man. Unfortunately, his business acumen didn't seem to extend to his personal life. He married Chizuru Kobayashi Aoki in 1964. The couple had three children, Kana (a.k.a. Grace), Kevin, and Steven Aoki. The couple divorced in 1981. Aoki then married Pamela Hilberger Aoki the same year. He had three children with her – Kyle, Echo, and Devon. The couple divorced in 1991. He then married Keiko Ono Aoki in 2002 and remained with her until his death in 2008. He also had one more child out of wedlock. He did not know about the seventh child until he was sued for paternity much later. Based on ages, he actually made three children, with three different women, all about the same time. That's awkward. It also created a total mess.

In 1998, faced with an insider trading conviction, Aoki created a trust that was to be controlled by Kevin, Kyle, Grace, and his friend Kenneth. Then he remarried in 2002, and everything started to get really wacky. First, he sued four of his children, Grace, Kevin, Kyle, and Echo, in 2005. His companies were worth nearly $100 million at that point, and he felt that they were trying to take them from him. He also felt under attack by his first wife, who he believed had never forgiven him for making a first child with his second wife, at the same time she was growing their third child. Did you get all that? When he passed away, his third wife became the CEO of Benihana, and the owner of much of the company's stock. However, she was never part of the original trust agreement, though she now had control of it as the heir to his fortune. When Aoki's children tried to take control of it, she fought tooth and nail. In fact, she fought tooth and nail for the next six years. The trust was worth $50 million, and she did not want to give that up. Devon Aoki and Steven Aoki, the primary parties involved, finally won the suit in May, but it wasn't a total victory. They are not allowed to touch the trust until they both turn 45. Devon is 31 and Steven is 36. In the meantime, their erstwhile stepmother, Keiko Ono Aoki, controls every penny.

So – back to court everyone has gone. The Aoki children feel that their father's third wife is mismanaging the company, their trust fund, and just about everything having to do with their late father. They might not be too far off the mark either. Since Keiko Ono took control, the company has been sued multiple times and lost. She has also filed two lawsuits – and lost both times again, and there is yet another lawsuit in court. Devon and Steven want a detailed account of how all of the money in the trust is being spent, but Keiko Ono is balking. It might take years for it all to get worked out. By that time, who knows if there will be anything left for Aoki's children.