How A Former Surfer Became A Billionaire Thanks To GoPro Cameras

After months of anticipation, earlier today GoPro finally had it's Initial Public Offering. The story of how the company's founder, an avid surfer named Nicholas Woodman, came up with the idea for the the GoPro Camera is the perfect example of necessity being the mother of invention. Prior to becoming a full time entrepreneur, Woodman spent years traveling the world trying to catch the perfect wave. Everywhere he traveled, Woodman carried with him two crucial tools every surfing nomad must posses: #1) A surf board (obviously). And #2) A camera to document everything. During a particularly inspirational summer spent surfing in Indonesia and Australia, Woodman had a revelation that would change the course of his life: There had to be a better and more active way to capture photographs of the surfing action than his current basic options. The resulting product was the GoPro camera. Fast forward roughly 10 years, and thanks to GoPro's IPO Nicholas Woodman is officially a self made surfer billionaire $4.5 billion. Here's how he did it… 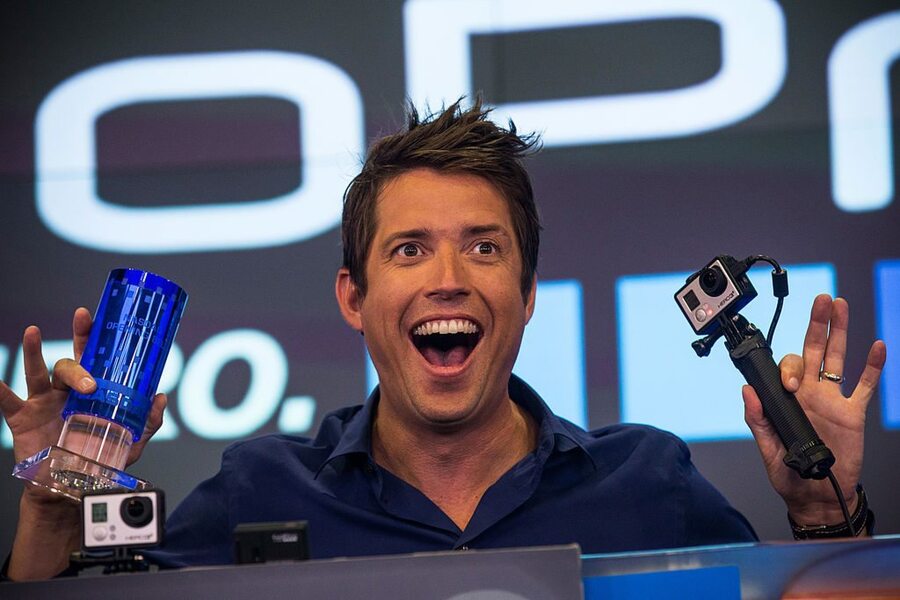 Woodman grew up in Atherton, California; a city in Silicon Valley as the youngest of four children. His father was a successful executive who brokered the sale of Taco Bell to Pepsi. He was a B+ student who focused more on sports than academics. Once he discovered surfing, he was hooked and attended the University of California, San Diego not just for its academic reputation, but for its La Jolla location close to great surf and 360 days a year of glorious Southern California sunshine. His parents didn't love the idea of his college career having surfing as a distraction, but if Woodman hadn't been so wave obsessed, he'd never have seen the need to create the GoPro camera.

After college Woodman got into the start-up game and founded an online gaming site called Funbug. The dot-com crash of the early 2000s killed his company and $3.9 million of his investors' money. Woodman's previously unshakable confidence took a hit and to clear his head and figure out what to do next, he set out on that surf trip to Australia and Indonesia. He saw it as his last fling before coming home to take a respectable job and live out a life of middle class monotony.

On that trip, Woodman brought along a gadget he made out of a broken surfboard leash and rubber bands that allowed him to secure a waterproof disposable camera to his wrist so that he could take the perfect picture when the wave was just about to hit. After five months, Woodman returned to California with the germ of the idea that would turn into GoPro. He was 27-years old.

Woodman hold up in his rental house in Moss Beach, California and cut himself off from everyone and everything-including his family and friends- to work on his first prototypes. When he set out to create the GoPro, it truly was to the exclusion of all else. He took his mother's sewing machine, a drill and a Camelback filled half with water and half with Gatorade and settled in for 18-hour work sessions. He knew he had to create and sell not just the camera, but the strap and casing as well.

Woodman gave himself a four-year window to make this new venture work before he'd give up and get a conventional job. His Funbug failure weighed heavily on him, and he was determined to avoid that same fate for GoPro. He spent an inordinate amount of time sewing together old wetsuit material and drilling holes in plastic.

The problem he was trying to solve was crystal clear in Woodman's mind: Amateur photographers wanted to be able to take quality action photos but it was difficult because either they couldn't get close enough to the action, or they could not get good camera equipment at reasonable prices. This became Woodman's inspiration to invent a camera that was both affordable and could capture high quality action images.

The first iteration of the GoPro was actually just a 35mm camera attached to the palm of Woodman's hand by a rubber band. Eventually, these early experiments resulted in a simple solution. Using 3-D design software, Woodman created a prototype for a plastic case that would cover a small camera. Next, Woodman began attending trade shows looking for a camera he could license and modify to fit his case. He finally found a 35mm camera out of China that wholesaled for $3.05. Woodman then sent a sample of his plastic cases and $5,000 to a manufacturing company in China. He had no idea if he'd ever even get anything back from the company but, sure enough, a few months later the company sent back a finished product. Shockingly, Woodman sold his first newly named "GoPro" camera just a few months later at an action-sports trade show in San Diego in September 2004.

In its first full year of sales, GoPro grossed $350,000. Woodman was not just the founder, he was also the product engineer, head of R&D, salesman, and packaging guru. He called surf shops across the country hoping to get GoPro into the shops and out of Woodman's father's Sausalito garage. He peddled his cameras on QVC three times, working to promote the brand. 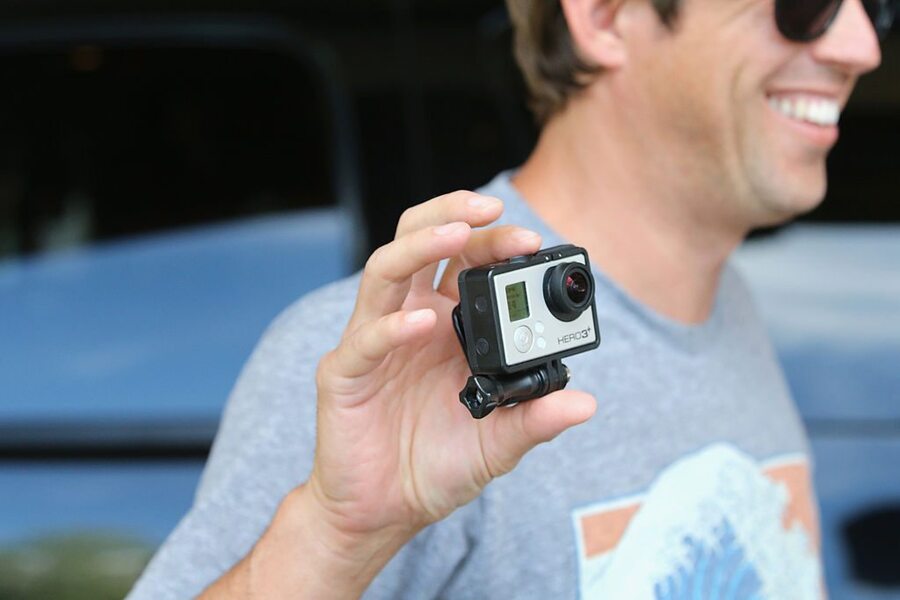 After his failure with Funbug, Woodman was reticent to get involved with investors and wanted to keep the company private for a long as possible. He invested $30,000 of his own money as well as $35,000 from his mother and two separate $100,000 investments from his father.

GoPro has been consistently profitable since the launch, and today has profit margins that are estimated to be about 15%. In May 2011, GoPro finally got into the venture capital game with $88 million in investments from five firms including Riverwood Capital and Steamboat Ventures. This cash infusion allowed Woodman, his parents, and some key early executives to recoup their investments.

Woodman's $200-400 cameras have become ubiquitous everywhere from surf breaks to ski resorts to scuba diving spots all around the world. Surfers, snowboarders, and mountain bikers strap their cameras to their surfboards, helmets, or handlebars and record panoramic footage of their action sport. The GoPro camera allows the user to be the star of their own highlight reel. Snowboarder Shaun White used GoPros during his Winter X Games runs. Hollywood film director Michael Bay keeps boxes of them on his sets. The Rolling Stones use them on stage to film their experience. Even the NFL has tested GoPros on their end zone pylons as a way of capturing touchdown replay footage.

Sales of GoPros have more than doubled every single year since the camera debuted in 2004. In 2010, Best Buy began selling GoPro cameras. In 2012, Woodman's company sold 2.3 million cameras and grossed $521 million. $100 million of those sales were in January alone (right before ski season). Woodman expects that figure to double again when 2013 comes to a close. After only a decade of existence, GoPro makes up 21.5% of digital camcorder shipments in the U.S. today.

Social media has played a big part in GoPro's trajectory. When Shaun White and other athletes post GoPro footage of themselves performing superhuman feats of athleticism, they tag their videos with the hashtag "#GoPro". You couldn't pay for a better endorsement. As time goes on more and more customers flock to GoPro, determined to capture cool footage of their own lives. GoPro has over 222 million views on its YouTube channel and 4.7 million likes on Facebook. Woodman invests $1 million a year making sure his company's name is hashtagged all over the Internet.

In December 2012, GoPro's rapid growth and market domination led Chinese electronics manufacturer Foxconn to make a $200 million investment in the company. That propelled the company to a $2.25 billion. Subsequently, Woodman, who owns 45% of the company, has seen his net worth propelled to $1.1 billion!

On June 26, 2014 GoPro finally went public on the NASDAQ under the ticker symbol GPRO. On the first day of trading, the company surged 38% and hit a peak market cap of $3 billion. At that valuation, Woodman's net worth is now officially $1.35 billion. Now that is pretty bodacious!

Update! It's the morning of June 27, and GPRO's share price keeps on climbing! In just the first few hours of trading alone, the stock has surged an additional 20% and the company's market cap is now $3.2 billion! That adds another $90 million dollars to Nick's fortune ($1.44 billion as of this writing).

Update! It's the afternoon of June 30 and GPRO's share price is still going up! As of this writing, GPRO is trading north of $41 a share. The company now has a market cap of $5 billion which means Nick Woodman is worth $2.25 billion!

Update! It's the afternoon of September 24 and GPRO's shares just hit a new all time high of $79. The company now has a market cap of $10 billion which means Nick Woodman is worth $4.5 billion.

By following his passions and using necessity to create a useful invention, Nicholas Woodman is 37-year billionaire surfer/entrerpreneur. Instead of living out of a VW bus like he did in his younger days, today Woodman flies to all of the world's most exotic surf paradises on a private G-IV jet!