Wait Till You Hear How Much Silvio Berlusconi Pays His Ex-Wife In Alimony… Every Single Day.

By Paula Wilson on September 16, 2014 in Articles › Entertainment

Divorce sucks.  How's that for a home truth?  Whether you are the one getting a divorce, the family of someone getting a divorce, or a close friend of someone going through a divorce – it's tough on everyone.  Dividing up lives that were once intertwined is no fun.  No matter how right the split actually is, it is still a major upheaval for all involved, and it can be quite complicated.  When you're wealthy, famous, powerful, or some funky combination of all three of these things, getting a divorce can become an epic event.  Case in point – Silvio Berlusconi.  The Italian media magnate and politician who has a net worth of $8.5 billion, had three children with his second wife.  On the surface, it seemed like a solid marriage. Behind closed doors, and eventually out in public, however, Berlusconi was anything but the devoted husband.  While his wife didn't get everything she wanted in the settlement, she got a whole heck of a lot.  Hell hath no fury like a woman scorned.  Especially one with a really good lawyer.

Silvio Berlusconi was born in Milan, Italy on September 29, 1936, to a banker and a  housewife.  He grew up with two younger siblings, and went on to graduate with a degree in Law from the Universita Stalale in Milan.  In addition to his focus on law, he also played the upright bass.  He played with an amateur band for a few years and performed on cruise ships.  The other members of the band would later become important figures in his business and political lives, as he appointed them to various high-powered positions in government or in his companies.  He began his professional career with an ambitious construction project called "Milano Due".  The project was the building of 4000 apartments just east of Milan.  It proved to be a successful development, and he took the money he earned from his first business venture and launched a cable television company called, "Telemilano".  Around the same time, he married his first wife, Carla Elvira Dall'Oglio.  Over the course of the next five years, they would have two children together. 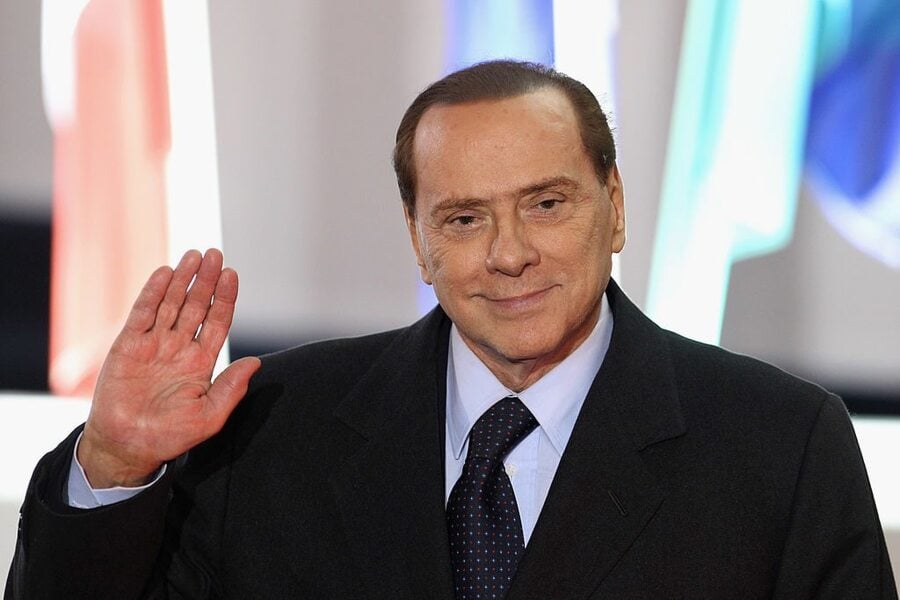 In the late 70s, Berlusconi bought up two more cable channels and then launched Fininvest, a media group.  Over the course of the next ten years, he bought up multiple smaller stations, until he helmed the only commercial television conglomerate in Italy.  It was wildly successful and he was pulling in $75 million per year.  However, his methods were suspect.  No one could quite figure out his multiple channels were making money, or how the money he was supposedly raking in was being spent.  Adding to the controversy, was the fact that there was a legal decree that stated that RAI, the Italian public broadcasting station, was the only station that was allowed to have a television monopoly.  Berlusconi was forced to cease broadcasting for almost five years, while the case against him went through the courts.  The decree was eventually overturned, and in 1990, he became the man in charge of multiple national television channels.  At the same time, his first marriage was falling apart.  He'd begun seeing another woman, actress Veronica Lario, in 1980, and she gave birth to their first child in 1984.  He divorced his first wife in 1985.  He then married Veronica Lario in 1990, after the births of their second and third children.  Well… you know what they say about hooking up with a cheater.  Odds are, they'll cheat again.

After marrying Lario, Berlusconi shifted his focus to politics, and by 1994, he'd become Italy's Prime Minister.  However, his party, Forza Italia, which had appeared out of nowhere, subsequently fell apart.  An election was held in 1996, and he was booted from Parliament.  He ran for re-election in 2001, and was returned to power.  He remained in power until 2006, then lost to his opponent, Romano Prodi.  Prodi tanked, and in 2008, Berlusconi was re-elected Prime Minister.  All told, he is the third longest serving Prime Minister in Italy's history.  He remained in office until 2011, but eventually resigned when it became clear that Italy's finances were going to hell in a hand basket.  He considered running again, but instead, it was agreed that he would advise other candidates within his party, rather than running himself. 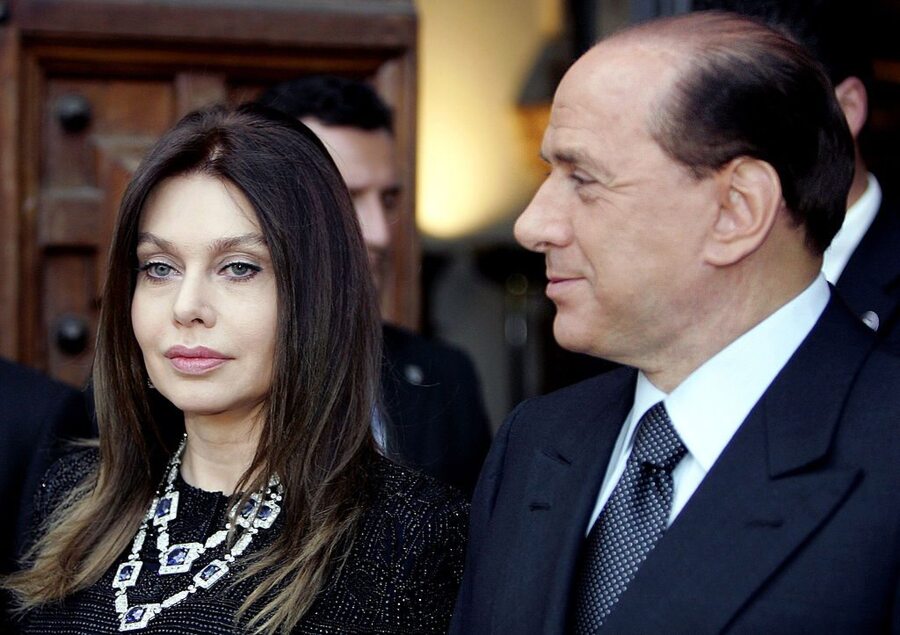 You see, Berlusconi had run into some major personal and professional problems while he was Prime Minister, and no one was quite sure if the public would be willing to overlook his issues.  First, there were the bribery, drug trafficking, money laundering, defamation, illegal land acquisition, tax evasion, embezzlement, tax fraud, false accounting, and extortion charges leveled at him by multiple parties in the late 80s and early 90s, as he worked to grow his media empire.  He was acquitted of many of the charges, or the cases were dropped, due to lack of evidence or because applicable laws were changed suddenly.  Between 1988 and 2004, he was acquitted of 19 major crimes.  At the same time, he was found guilty of false accounting, embezzlement, perjury, and defamation.  He was convicted of personal tax evasion, which led to community service and a barring from political office.  He is currently on-trial for bribery, defamation, and finally, soliciting and paying an underage girl to have sex with him in 2010.  To make matters worse, he allegedly used his position as Prime Minister to get her released from prison, after she was arrested on an unrelated charge.

All of this mess combined to create a situation in which his second wife basically wanted nothing to do with him.  The underage girl was but one of many young women who Berlusconi was rumored to be having an affair with.  In fact, while he was Prime Minister, he was known for randomly appointing beautiful young things, with zero political experience, to his cabinet.  Lario first voiced her frustration with this state of affairs in 2007, when she issued a public statement saying that "her dignity as a woman" had been hurt, after Berlusconi publicly joked that if he wasn't married, he would run off with Mara Carfagna, a popular showgirl.  Berlusconi issued a public apology, then appointed Carfagna to the position of Minister of Equal Opportunities, even though she had very little political experience.  Then photos began to surface of him partying at the birthday of Noemi Letizia, an 18-year old lingerie model.  She was later hired to represent Berlusconi's political party in the 2009 European Parliament elections.  Combine this with the fact Berlusconi didn't even show up to celebrate his own children's birthdays any more, and Lario was done.  She threw up her hands and filed for divorce on May 3, 2009.

It took until 2012 before the entire mess was ironed out.  Lario wanted everything and she fought tooth and nail for it.  Under Italian civil law, "the standard of living shared by the couple before separating must be maintained when there is economic disparity between them".  She wanted their real estate holdings, their portfolio, and a stake in all of his business interests.  After intense public, and occasionally nasty negotiations, they finally worked out a deal.  Berlusconi would get to keep his holdings and the portfolio, but she would be paid a child support amount that would allow his children to live at a level to which they'd become accustomed.

So, how much does it cost to maintain the lifestyle of a family that has lived as billionaires for most of their lives?  Turns out it costs $127,607 per day.  Yes, you read that correctly, Berlusconi is forking out a six-figure child support payment to his wife and three children, every single day.  He'll be shelling out just under $4 million per month for a long, long time. Ouch. He's always been the posterboy for shady politician/businessman everywhere.  Now he's barred from office and is slowly leaking money to his former family like an eternally deflating balloon.  It looks like karma came back and bit him on the bum in a big way.  Here's hoping all those other crooked politicians out there learn from his mistakes.

If someone you know has gone through a financially painful divorce, please send them this article. It could always be worse!