Former Mexican President Enrique Pena Nieto Lives Lavish Lifestyle Well Beyond His Means… Or Is It?

By Amy Lamare on January 27, 2019 in Articles › Entertainment

Recently, former Mexican President Enrique Pena Nieto was alleged to have accepted a $100 million bribe from drug kingpin El Chapo. He has, of course, denied it. But this got us thinking: Official financial disclosures for Pena Nieto put his net worth at about $3.3 million in 2014. Not bad at all, but certainly not enough to live in the lifestyle he and his former soap star wife Angelica Rivera Hurtado enjoyed, which included a $7 million custom mansion built to their exact specifications. Oh, but wait, the owner of the house Enrique and his glamourous wife live in is officially owned by a Mexican businessman who benefitted from billions in government contracts from Pena Nieto's administration over his six years in office. What is going on here?

First of all, the mansion, called Casa La Palma, has never been listed on any official disclosures of assets and properties by President Nieto as is required by law. A handful of years ago, this was quite the scandal for Mexico's first family. Pena Nieto had campaigned on the promise of transparency, but as it turns out, his years in office were anything but that.

The house, as mentioned, is owned by a company that is a part of a consortium that had been awarded a multi-billion dollar contract to build a bullet train through central Mexico. Casa La Palma is clad in floor-to-ceiling marble and located in Las Lomas de Chapultepec, one of the most expensive and affluent neighborhoods in Mexico City. The nearly $7 million, 13,000 square foot property was built in 2011. It has an elevator, underground parking, and lush gardens. The interiors have a lighting system that can turn the walls pink, violet, or orange. 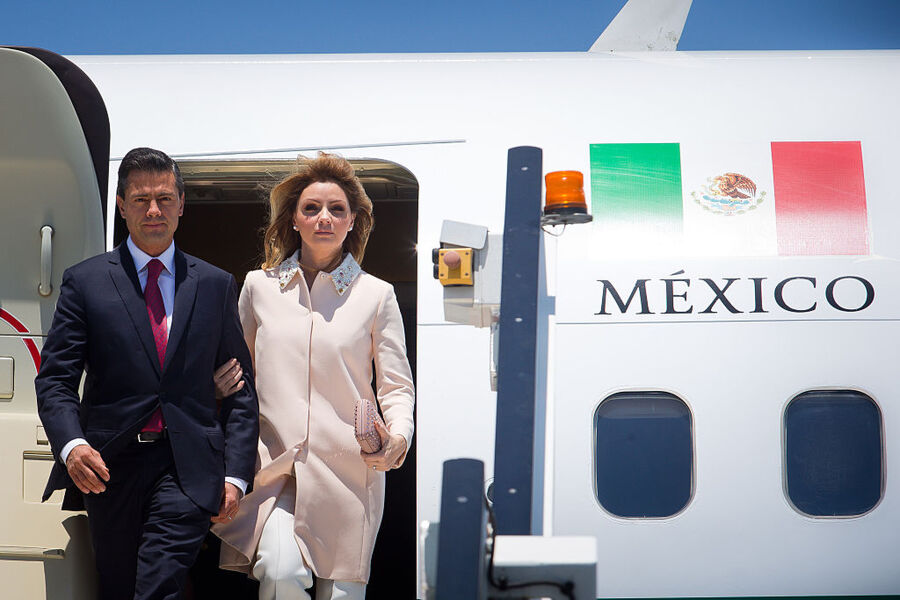 In a May 2013 interview with the Mexican society magazine Hola, Angelina Rivera Hurtado is seen in photos inside Casa La Palma. She told the magazine, "We have Los Pinos (the official residence of the Mexican president) on loan for just six years. And our real home is here, where we have done this interview."

This house that Rivera Hurtado claimed belonged to her and Pena Nieto is actually in the name of Ingenieria Inmobilaria del Centro, a subsidiary of the Mexican conglomerate Grupo Higa. That company is headed up by Juan Armando Hinojosa Cantú, who has had ties to Pena Nieto since he was governor of the state of Mexico. Pena Nieto's administrations have been doing business with Grupo Higa for many, many years. When Pena Nieto was governor of the state of Mexico, several lucrative contracts fell into the laps of Grupo Higa's subsidiaries, including a hospital, highways, and deals on materials such as cement. Grupo Higa made more than $500 million from projects that Pena Nieto's gubernatorial administration gave to the company.

That close tie between Grupo Higa and favors from Pena Nieto continued when he was president. For instance, a subsidiary of Grupo Higa was awarded the $4.3 billion bullet train contract. It was the only bidder in the project.  That bid was eventually revoked just days before an explosive report on the seeming corruption was to hit the newsstand.

But back to Casa La Palma. The house was built with the first family's particular tastes in mind. The company that officially owns the house was incorporated the day after Pena Nieto went public with his relationship with his then girlfriend Rivera.

President Pena Nieto's office released a statement acknowledging that Casa La Palma was registered in the name of Grupo Higa, but also said that Angelica Rivera Hurtado was making payments to the consortium to pay off the house.

Rivera making payments on a $7 million house is just not feasible. Rivera would have had to work on the telenovelas for Televisa that made her famous for at least 53 years to earn enough to pay off a mansion costing what Casa La Palma did. Look, actors and actresses in telenovelas just don't make that much money. At the time when Angélica Rivera was working for Televisa, (from 1988 to 2007), "exclusivity contracts" were in use, which generally lasted for five years and meant the actors could not work for any other station or entity. Additionally, the highest paid actors and actresses never made anything even close to what would be needed to buy a house costing $7 million.

Angelica Rivera would have had to have 10 exclusivity contracts work for 53 consecutive years at Televisa to buy a property of 86 million pesos/$7 million. The top paid actors and actresses at Televisa make between five million and eight million pesos—which is $263,000 to $421,000 USD. Not a bad salary, but not one that can afford a $7 million home.

So, we have a mansion that seemingly is way beyond the means of both Pena Nieto and Rivera's individual and combined wealth. A mansion that was built by and being financed by a major government contractor—a contractor whose companies or those run by his closest associates  that had been awarded 99 contracts with government entities since 2005. Pena Nieto was governor of the state of Mexico from 2005 to 2011. He was president of the country of Mexico from 2012 to 2018. Pena Nieto is Hinojosa's son's godfather.

The number of conflicts of interest here are staggering.

Are we really all that confident that he didn't take the $100 million bribe from El Chapo?