By Paula Wilson on December 17, 2013 in Articles › Entertainment

It is amazing how many of the greatest inventions and innovations throughout history have occurred because someone happened to be in the right place at the right time.  Sometimes, all it took was one glance, one sentence, one connection, to change the course of history.  For Phil Knight, the co-founder and Chairman of Nike, Inc., that one moment happened when he was in a graduate school business course on small business.  The instructor, Frank Shallenberger described the qualities of an entrepreneur.  Phil Knight immediately recognized himself in his professor's description, and using the business plan he created in class, he set out to launch an empire.  He succeeded beyond his wildest dreams.  This former college track star from Oregon would go on to become one of the most powerful businessmen on the planet with a net worth of $16.3 billion! 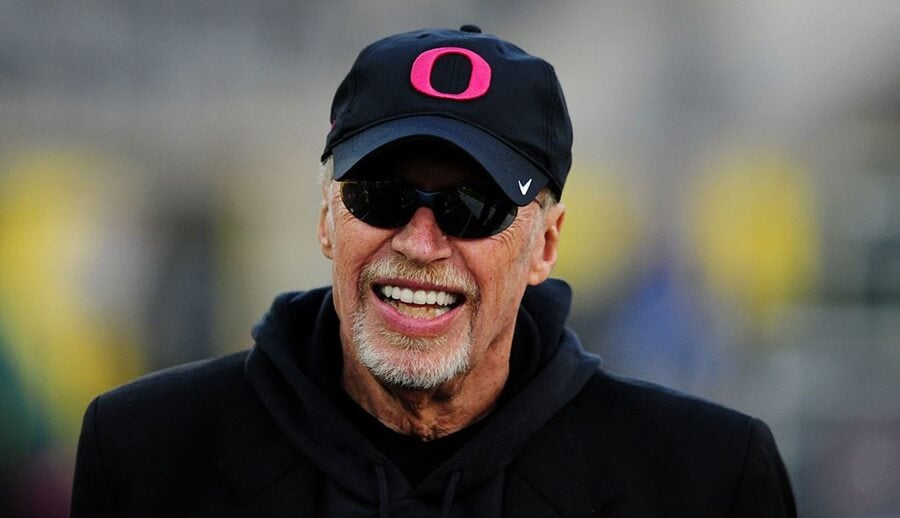 Phil Knight was born in Hillsboro, Oregon and loved running.  His father ran the local newspaper, and Phil wanted to work there.  However, his father felt that finding a job on his own would be a better experience for his son.  He refused to hire him.  In an early display of the stubbornness and tenacity that later became his hallmark, Phil Knight's solution was to seek a job at the rival local paper.  After working there each evening, he then ran home – seven miles.  He went on to attend the University of Oregon, where he lettered in middle-distance running three years in a row.  After earning his degree in Journalism, he joined the U.S. Army.  He spent a year on active duty, and seven more years in the Army Reserve.  After returning from his year of service, he was accepted to the Stanford Graduate School of Business.  It was while at Stanford that the seeds for Nike, Inc., were sown.  He wrote a business plan called, "Can Japanese Sports Shoes Do to German Sports Shoes What Japanese Cameras Did to German Cameras?".  The business plan became the outline for his first shoe business.

While traveling around the world post-graduation, he became very interested in Tiger Running Shoes, a brand of shoes manufactured in Kobe, Japan.  Using the same tenacity that allowed him to snag a job at the rival paper back in Hillsboro, he called the CEO of Onitsuka Co., the manufacturer of Tiger shoes.  Mr. Onitsuka agreed to meet with him, and by the end of the meeting, he had secured the distribution rights for Tiger shoes in the United States.  He spent the next year working as an accountant at Price Waterhouse and Coopers & Lybrand, while the first order of shoes were made and the export paperwork was completed.

After the shoes arrived, he put his small business savvy to the test.  First, he looked for someone to endorse his shoes.  He chose Bill Bowerman, a well-respected track and field coach at the University of Oregon.  Bill Bowerman looked the shoes over and offered to become his business partner instead, subsequently providing multiple ideas for ways to make the shoes better.  Their company, Blue Ribbon Sports, became a reality in January of 1964.  To keep overhead low, Phil Knight began selling his shoes out of his green Plymouth Valiant, traveling from track meet to track meet all over the Pacific Northwest.  Word of his awesome shoes slowly spread, and by 1969, he was able to support his family from Blue Ribbon sales alone.  Blue Ribbon needed a better name, however, and his friend, Jeff Johnston, suggested Nike – the Greek goddess of victory who is always depicted with wings.  He then turned to a local graphic arts student, named Carolyn Davidson, to create a logo for the company.  He paid her $35.  In 1971, the Nike "swoosh" designed by Ms. Davidson, became the official logo of the company.

Since then, Nike has become one of the most successful businesses in the world.  The Nike logo has become a globally recognized image, and Nike shoes and sportswear are considered prestige items.  The company's tagline, "Just Do It", has become an international catchphrase.  Phil Knight's company employs upwards of 44,000 people around the world, and it is currently the most valuable sports brand on the planet.  The roster of athletes/celebrities that have endorsed the Nike brand in print and television advertisements reads like a "Who's Who" of the elite sports world, and has included Ilie Nastase, Carl Lewis, Jackie Joyner-Kersee, Michael Jordan, Cristiano Ronaldo, Didier Drogba, Landon Donovan, and Rory McIlroy.  The company also provides sportswear for all NFL teams, the South Korean baseball teams, national basketball teams for 19 countries, the Indian Cricket team, 13 soccer (football) associations, including Serie A and La Liga, and 71 college teams, among many, many others.

Rather than sit on his money, Phil Knight has been quite generous to those institutions that he feels shaped him into the man he is today.  He has become known for his generous personal donations to the Athletic Department at the University of Oregon.  He has actually set records with the amount of money he has gifted the school.  His generosity has accorded him a measure of power over decisions made at the institution which has created some controversy, but for the most part, the arrangement has worked well for everyone.  To date, he has donated approximately $300 million to his alma mater.  He has also been quite generous to the Stanford Graduate School of Business, donating $100 million.  He has also donated large amounts to his high school, and gave another $100 million to the OHSU Cancer Institute of the Oregon Health & Science University, the single largest donation in the institution's history.  He also gifted Carolyn Davis, his original logo designer, with an undisclosed amount of shares of Nike stock in 1983.

The man who loved running in high school and college, built an amazing life out of the thing he loved best.  Though he resigned as CEO in 2004, the now 75-year old billionaire is still Chairman of the company he grew out of the back of his Plymouth Valiant at track meets.  In 2012, he was inducted into the Basketball Hall of Fame as a contributor.  The Hall of Fame committee recognized him as a driving force behind the NBA and its players.  He has also continued to donate money to educational initiatives and cancer research.  He has his hands in a number of projects, and shows no signs of slowing down.  That tenacity and stubbornness has gotten him very far, but it is his generosity, and understanding of what it means to excel as an athlete, that will ensure that he has a lasting legacy.