The Four Seasons Hotel is attempting to change the luxury travel industry with their new private jet. Now, instead of flying commercial from destination to destination, the five-star hotel chain's clients can fly the friendly skies in the lap of luxury. The hotel is betting on the fact that they can lure as many as 52 passengers (the jet's capacity) to pay $119,000 each to fly around the world in style on the swanky new plane that underwent a multi-million dollar facelift before it got branded with the Four Seasons logo.

This is no ordinary plane. It's not even a Gulfstream. It is a Boeing 757-200ER leased by the luxury tour operator TCS World Travel from TAG Aviation – which will provide pilots and maintenance. It is operated under the Four Seasons name as an option for luxury group trips.

The exterior of the plane was painted a sexy shade of metallic back. The interior was stripped of its 233 standard sized airplane seats to install 52 lie flat seats that stretch to 6 ½ feet with tons of legroom and personal space. The overhead bins are double the usual size but take up less headspace by being installed into the crown of the fuselage. The interior's LED lighting system is in shades of violet and blue. A typical refit of a commercial plane runs about $15 million. The Four Seasons and TCS did not disclose the amount they spent, however, they said this was not a typical refit. Significantly more work was done. 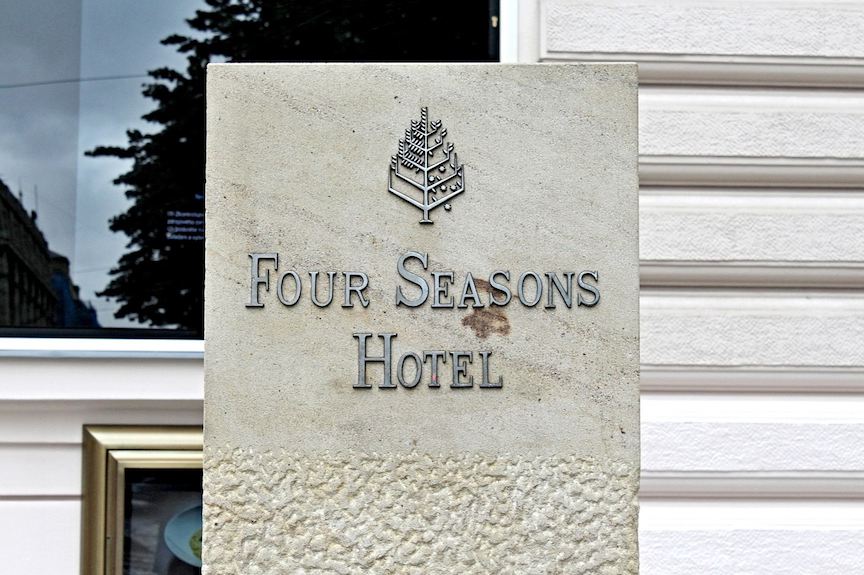 In actuality, the Four Seasons has been working with TCS to offer private jet trips since 2012, but this is the first jet completely branded to the hotel chain. This gives them a lot more control over service than they had when they chartered other people's planes. The Four Seasons seeks to offer the famous service and luxury of their hotels and resorts at 35,000 feet.

The crew will consist of a minimum of 21-hotel trained staff including three pilots, two engineers, a journey manager, a concierge, and an executive chef. On certain trips a doctor and photographer come along when the travel warrants it such as during big game watching in the Serengeti.

The trip itineraries are planned to avoid long flights. On an around the world tour, flight times range from 3.5 hours to eight hours. Basically, it is an all first class shuttle from one Four Seasons resort to the next. Travelers never have to manage a single travel detail themselves. All accommodation, food, beverage, ground transportation, and custom excursions are included in the price.

Executive chef Kerry Sear calls the Four Seasons jet his restautant in the sky. Local ingredients are provided by Four Seasons chefs at the hotels at each stop. The food is cooked fresh in the air with a steam oven. Chef Sear talks to the guests to gague their preferences and then coordinates the menu to make each guest happy. It is an upscale menu where Dom Perignon champagne and Petrossian caviar are staples available at all times. A flight leaving Hawaii may feature fresh caught fish in a macadamia crust. A trip out of Thailand may have guests finding a chocolate elephant waiting at their seats. Sear tries to pack playfulness into the culinary experience 35,000 feet in the sky.

The fully reclining, white leather seats were designed by Italian designer Iacobucci and they seem designed to provide weary travelers with much needed sleep. They go from siting to lying flat smoothly with the press of a button on a personal control panel. The tray tables are a dark wood and spacious enough to hold a laptop or a formal setting for a four-course meal. 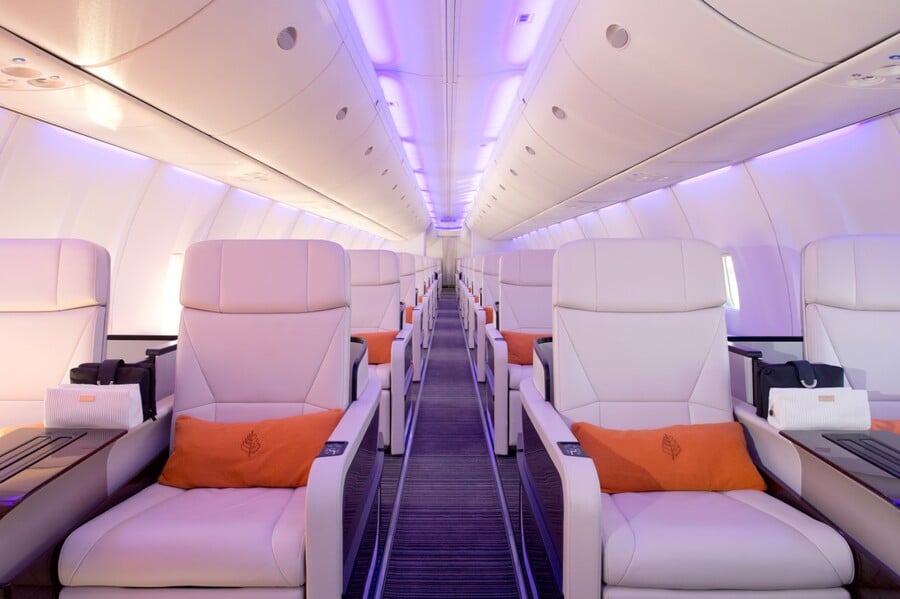 When you get to your seat, you'll find a Bvlgari toiletry kit, Bose noise canceling headphones, a cashmere blanket, and a custom made Moleskin leather travel journal with matching pen. Prior to the trip, each guest receives an iPad 2 Air to pre-load with music, movies, and books for a personalized in-flight entertainment system. All of these things are the traveler's to keep.

The women's toiletry kits come in a white bag and include lip balm, hand cream, facial cleaners, towels, breath mints, toothbrush, toothpaste, and dental floss. The men's kits are the same except in black bags and also include aftershave and gel. Each comes with a super soft sleep mask as well.

Alas, even though this is the Four Seasons, there isn't much they can do about in flight bathrooms. They are bright, clean, and feature Bvlgari green tea air freshener, but they are still normal coach class airplane bathrooms.

All of this luxury and exclusivity should also include a private boarding experience, right? Not so fast. As far as airport regulations are concerned, this is still a 757 and it must abide by guidelines for that class of plane. In some locations, pilots land in smaller airports in order to provide a private boarding and de-planing service. Some airports – like Los Angeles, London, and Paris – are equipped to provide special services. Others – like Sydney and Tokyo – are not, and guests board as they would any other ordinary flight.

When a private airport isn't available, the Four Seasons arranges expedited security clearance and the jet is ready to board and depart as soon as guests are seated.

The next Around the World tour is scheduled for August and includes nine stops from Seattle to New York via Asia. The $119,000 trip is sold out.

Next year's 24-day itinerary will set travelers back $132,000. Better book now, this one is sure to sell out as well!