How Floyd Mayweather Makes And Spends His $400 Million Personal Fortune

By Amy Lamare on August 24, 2017 in Articles › Entertainment

Floyd Mayweather, Jr. has been on the boxing scene since the mid- 1990s. He's had an enormously successful career, beaten a who's who of boxing over the past 20 years, made boatloads of money, and spent a ton of money. It has been almost two years since Mayweather's last lucrative step into the ring and yet he still manages to capture headlines. From his much touted bout against MMA's Conor McGregor to his IRS lien, where Mayweather goes, so goes the public's interest. Let's take a look at how he made his money and the myriad ways in which he spends it.

Of course there's the fighting. On August 26th, Mayweather will step into the ring in a cross-sport match against UFC star Conor McGregor. The odds are in Mayweather's favor, but anything can happen between the ropes. Also, let's face it; fans will turn into the Mayweather-McGregor match by the millions just to see the two superstars of their sports in action. And every eyeball on that match adds dollars to Mayweather's bank accounts.

Mayweather comes from a boxing family. His dad, Floyd Mayweather, Sr. was a successful welterweight in the 80s. Senior stepped into the ring to take on the likes of Sugar Ray Leonard and other stars of the era. Mayweather, Jr. had the boxing stance nailed before he even learned to walk.

Mayweather, Jr. first made a name for himself as an amateur when he won the bronze medal at the 1996 Olympics in Atlanta. After the Olympics, Mayweather turned pro and fought Roberto Apodaca. He won that fight, his first as a professional. Floyd Mayweather, Jr. is unbeaten in his career to date with 49 wins, 26 of them by knockout. And with that unbeaten record comes big money. The bigger the competitor, the bigger the paycheck.

One such fight was in 2007 against Ricky Hatton. Both boxers entered their fight with perfect 43-0 records. Of course, only one could leave the fight still unbeaten. Mayweather finished Hatton off in the 10th round.

Then, in 2009, he fought Juan Manuel Marquez, Manny Pacquiao's longtime rival. Mayweather earned a unanimous decision in that bout.

Despite his perfect record, his biggest win came outside of the boxing ring. In 2006, he paid $750,000 to nullify his contract with Top Rank promotion company. He wanted to negotiate his own contracts. And he did that very well. Less than a year later he took on superstar Oscar De La Hoya and took home $25 million. To this day Mayweather negotiates his own fights and with a net worth of $400 million, is doing a good job at it. 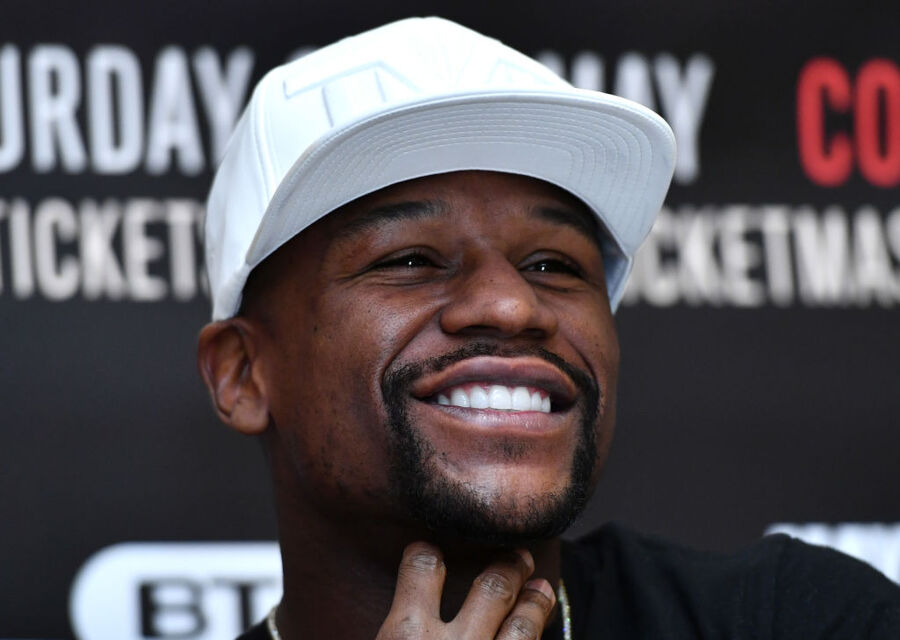 In 2010, Mayweather made $65 million from his fights with Marquez and Shane Mosley. In 2015, he made $230 million for ONE FIGHT. Of course, that was against Manny Pacquiao and Mayweather had to work for that payday. He won in an unanimous decision after the 12th round.

Mayweather can obviously bring home the money, but he's also exceptionally good at spending it. For instance, he once spent $6.5 million on two Bugattis. I mean, why buy one when you can have two, right? The Bugattis aren't even the most expensive car he owns. His super rare Koenigsegg CCXR Trevita is one of only two in the world. It cost Mayweather $4.7 million. He is reportedly currently auctioning off the rare and pricey ride.

Other pricey things Mayweather likes include watches. He owns watches by Rolex, Audemars Piguet, and Aximum. Needless to say these cost substantially more than your average Fossil watch at Macy's.

Mayweather loves to travel to places like Rio de Janeiro and Cairo but he doesn't fly commercial. The boxer has at least two private jets at his disposal.

And while he is jetting around the world counting his cash, Mayweather is dressed in the best designer clothes.

He also likes to show off his wealth – and not just through his expensive cars or private jets. Mayweather literally posts pictures of himself counting his cash on Instagram. On another occasion, he posted a photo of a $100 million check to Instagram.

He has also struggled with the IRS. Earlier this year the IRS filed a tax lien for $22 million that Mayweather supposedly still owes from 2015.

If Mayweather beats McGregor on August 26th, it would be his 50th career win. He stands to make as much as $300 million from the fight.

No wonder his nickname is Money.