By Brian Warner on July 23, 2018 in Articles › Entertainment

Floyd Mayweather and 50 Cent used to be best friends. They traveled on jets together to exotic parties. They gambled together. They trained together at Floyd's gym. At one point there was even talk of 50 and Floyd starting a boxing promotions company accompanied by a 50/Floyd reality show. On some of Floyd's biggest fight nights, 50 was front and center leading the boxer's entourage from the locker room to the ring, microphone in hand. The day Floyd finished serving a 90 day sentence for domestic battery, guess who was waiting for him outside the jail with a limo, a million dollars cash in a suit case and a private jet full of gas? 50 Cent. It was a match made in heaven for two extremely wealthy guys with lots of free time and very similar extracurricular activities. Then, for some reason, their relationship fell apart.

The first sign that all was not well on the Jackson-Mayweather bromance came in November 2012 when 50 sent out a tweet announcing that he was "no longer down with with Floyd Mayweather or involved in their partnership, TMT Promotions" (The Money Team). 50 also claimed that Floyd owed him $2 million that he invested in TMT Promotions.

Over the last few years, the two former friends have waged a war over social media. A war that has mainly consisted of periodic embarrassing jabs over Instagram or Twitter. For example, there was the time when Floyd tweeted a photo of 50 holding his boxing belts with the caption "A male boxing groupie.. hold my belts because your album sales have declined".

There was the time in 2014 when 50 claimed in an Instagram post that Floyd can't read. 50 went so far as to challenge Floyd to go on Jimmy Kimmel and read one page of a Harry Potter book out loud. If he successfully read the page, 50 said he would donate $750k to charity.

And then, not surprisingly, Floyd wasn't exactly respectful when 50 Cent was forced to file for personal bankruptcy in July 2015 after he lost two very large legal judgments in a matter of weeks.

I actually thought their feud had run its course and died out. I was wrong. 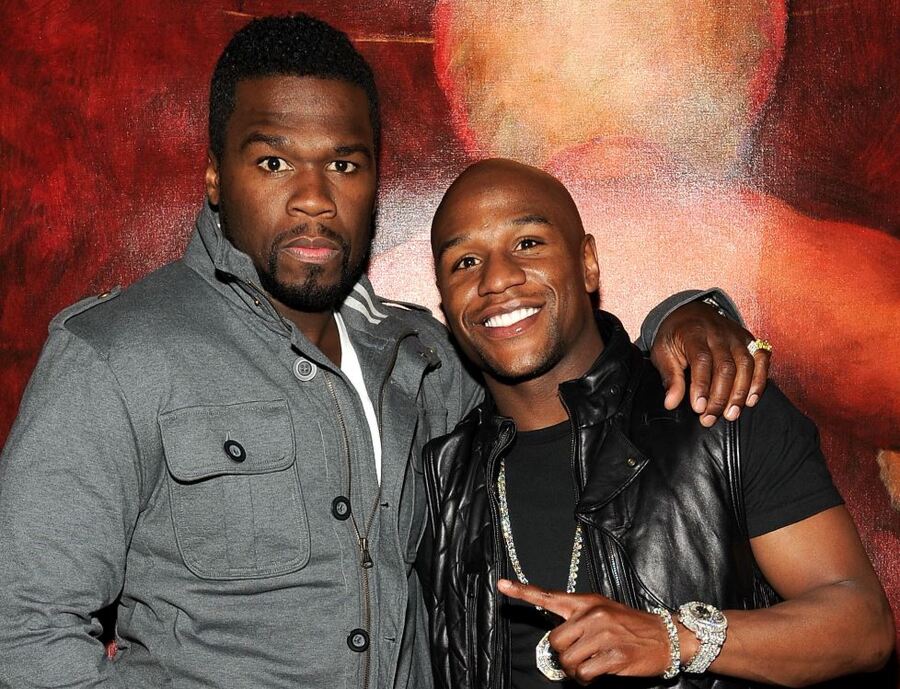 50 Cent and Floyd Mayweather (Via Getty)

Last week, after it was revealed that Floyd had spent $18 million on a watch, 50 took to instagram to point out that this might not have been the wisest investment: "Man they found the 1 ni**a in the world, dumb enough to buy that watch. LOL get the strap." Btw, if you haven't seen this $18 million watch yet, please click here now and watch the video. It's unreal.

A few days go by and then earlier today, Floyd Mayweather posts the following to Instagram:

As you can see, on the left side of the post Floyd has photoshopped an image of a rat on top of an image of very sick-looking 50 Cent. I don't really understand the backstory of the rat stuff, but I do understand Floyd pointing out 50 Cent's current net worth of $20 million. On the right side of the post there's an image of the watch that Floyd just bought for $18 million. The not-so-subtle jab is that Floyd's watch is nearly as valuable as 50 Cent's entire current net worth. As in, Floyd almost has an entire 50 Cent on his wrist.

Break out the popcorn, because this feud is back and hotter than ever!