Five NFL Players Under 30 Have Retired In The Past Two Weeks. Should The NFL Be Worried?

Former San Francisco 49ers linebacker Chris Borland sent shockwaves throughout the NFL this week, when he announced his retirement after just one year in the NFL. Borland, who made $1,037,436 (which included a signing bonus) during his lone season in the league, cited the potential threat of long-term brain injury as the reason he was walking away from the game.

Borland wasn't much of a slouch, either. He was among the top defensive rookies in the league, racking up 107 tackles and a sack. In a Week 11 game against the New York Giants, Borland had two interceptions, becoming the first rookie linebacker in Niners history to pick off two passes. He was also due to make $540,000 this season, but is thinking of his long-term health over any short-term money. 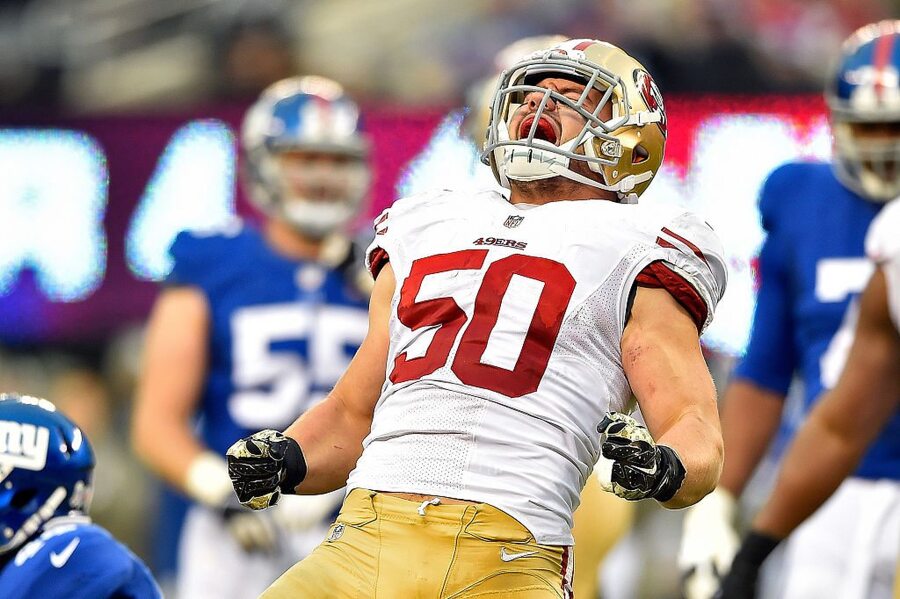 It's certainly a valid concern. More than 70 former NFL players have been diagnosed with progressive neurological disease, which of course wasn't known until after their deaths. And we don't need to get into the many studies that have shown connections between the head trauma sustained in football with brain damage, and issues like memory loss and depression. Borland never had a concussion in the NFL, though these studies say a diagnosed concussion doesn't have to happen for brain injury to develop.

Borland is not only giving up millions, he also has to pay back the niners $463,000 in signing bonus money.

With Borland retiring, this is now the fifth player under 30 years of age who has called it quits. Is there a larger issue at hand for the NFL? Let's take a look at the other players hanging up their cleats.

Another 49er, 30-year-old Patrick Willis, gave up the $7.8 million he was slated to make this upcoming season. He blamed chronic foot injuries for the early retirement. We're inclined to believe him–after all, this was a guy who broke his hand and was playing less than a week later. If he says an injury is slowing him down, it's probably true.

Maurice Jones-Drew announced his retirement at the age of 29, after nine seasons in the NFL. "Pocket Hercules" was often the only player worth watching on a number of dreadful Jacksonville teams, though his time in Oakland this past season was pretty dreadful itself. He racked up over 11,000 yards from scrimmage and had 81 touchdowns among rushing, receiving and kick return scores, but his final season showed just how fragile the life of an NFL running back is: 43 carries for 96 yards. It was clear he had nothing left in the tank–retirement made the most sense.

Jason Worilds was one of the most sought-after free agents in the league. But the linebacker retired at age 27. However, rather than mentioning the potential for injury, he's said he wants to focus more on his religion, and will go to work as a Jehovah's Witness.

Former Titans quarterback Jake Locker just retired at age 26, saying he no longer had a desire to play football. Might the potential for brain injury been a concern? Possibly, though maybe Locker just wanted to do some home improvements. He's said he plans to relax and remodel his house now that he has all that extra free time.

So the NFL shouldn't be too worried, but it should definitely be aware of all this. Don't expect to see a mass exodus of players departing the league, though Borland's decision might have more of a ripple effect in peewee leagues. Parents might not be so willing to let their children put on a helmet and pads. And with so much yet to discover about football and the impact it has on its players' brains, this could very well be the catalyst of widespread changes throughout the NFL.