The Five Most Expensive Guitars Ever Sold At Auction

By B. George Young on November 14, 2015 in Articles › Entertainment

Music is something that many people are passionate about, but would you pay a million dollars to own a one-of-a-kind, collectible guitar? Guitars are one of the most important instruments in rock and roll music and they've been played by legendary musicians for centuries.  Just like collectible luxury cars, guitars can go for very high prices at auctions.

Much in the same way certain car brands are worth more than others, guitars owned by certain musicians typically sell for more than others. Eric Clapton is known as a great guitar player, and his guitars often sell for big money. His Fender Stratocaster "Blackie" sold for $959,500, while other guitars, like his 1964 Gibson ES-335 TDC sold for $847,500, his 1939 Martin went for $791,500, and his Brownie Stratocaster fetched $497,500. Other big-name guitars to own have been played by famous musicians such as Jimi Hendrix, the Beatles, Jerry Garcia, and Les Paul. Here is a look at the five most expensive guitars that have been sold at auction and verified.

#1: "Reach Out to Asia" Fender Stratocaster

The main reason that this Fender Strat sold for so much is because of all the famous musicians' signatures that it has including Eric Clapton, Mick Jagger, Keith Richards, Jimmy Page, Pete Townsend, Jeff Beck, David Gilmour, Paul McCartney, Mark Knopfler, Sting, Def Leppard, and more. The guitar was sold in 2005 as part of the "Reach out to Asia" charity auction in Qatar to raise funds for the tsunami charity. This guitar was first owned by Qatar's royal family who paid $1 million for it and then donated it to the charity.

John Lennon used this guitar to write the popular Beatles tunes "She Loves You," "I Want to Hold Your Hand," "Please Please Me" and "All My Loving." He purchased it for just 161 pounds in Liverpool, England in 1962. His guitar went missing during the Beatles 1963 Finsbury Park Christmas Show and remained lost for more than 50 years. After being found, the guitar was sold by Julien's Auctions in 2015. At that same auction, an Ed Sullivan drum head that was featured on a Beatles album jacket sold for $2.1 million, while Elvis Presley's 24-carat Gold Leaf Piano went for $600 thousand. 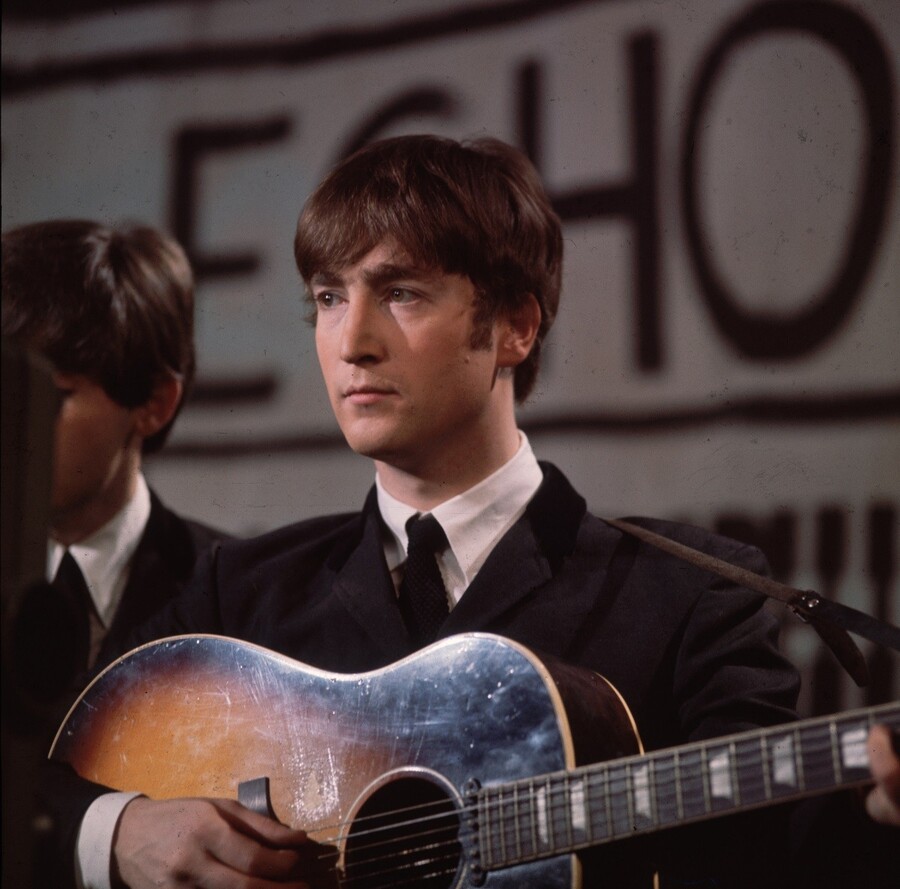 Dylan used this guitar in his infamous electric performance at the Festival in 1965. At the time Dylan was just 24 years old and this was the first set he had ever done with an electric backing band, which was hailed as "one of the most notable events in music history" by Rolling Stone magazine. In 2012 this guitar was submitted to the PBS television series History Detectives for authentication. The guitar was sold for just short of a million dollars in 2013 by Christie's auction house.

Clapton used this guitar often in the 1970s and 1980s, both on stage and in the studio. The guitar is a hybrid which was made from several vintage Stratocasters. The story goes that Clapton purchased six vintage Strats for $100 each. He gave one to George Harrison, one to Pete Townshend, and one to Stevie Winwood, and used the other three to create Blackie. The guitar was auctioned off in 2004 to raise money for Clapton's Crossroads Rehabilitation Center.

Fans of the Grateful Dead take their music very seriously so this guitar was a must have when it went up for auction in 2002. This unique custom guitar was made by master luthier Doug Irwin in collaboration with Jerry Garcia. Tiger was his main guitar from 1979 to 1989 before he switched to Rosebud, which was his main guitar from 1990 to 1995. At the final Grateful Dead concert before his passing, he had a problem with Rosebud and used Tiger one final time which only made the guitar more valuable.