By Brian Warner on October 4, 2013 in Articles › Entertainment

If you want to buy a book online, at this point pretty much everyone goes to Amazon.com. Right? If you want to buy shoes? Zappos. Domain name? Godaddy. An 18 year old Brazilian girl's virginity? eBay. A one way flight to Brazil? Kayak. But where do you go if you want to anonymously buy illegal drugs like heroin, cocaine, meth, molly, LSD etc… all from the privacy and comfort of a web browser? Well, up until 3:15pm on Wednesday October 2nd, for all these illicit purchases and more you could have gone to a website called SilkRoad. What happened Wednesday at 3:15pm? After months of painstaking investigation, the FBI swooped in and arrested the long sought-after mastermind of this highly illegal anonymous drug marketplace. Who was this mastermind? Was it a secretive Russian hacker living in Moscow? A Chinese internet tycoon operating from a private yacht in international waters? Actually, it was a 29 year old American named Ross Ulbricht who operated most of his empire out of a San Francisco coffee shop. When he was arrested, he was actually using the free wifi at a public library. This story is long, but completely insane, totally worth reading all the way through. In case you need some teasers, this story involves billions of dollars worth of drug transactions, an enormous illegal fortune made entirely out of Bitcoins, fake passports and even a couple of hitmen. 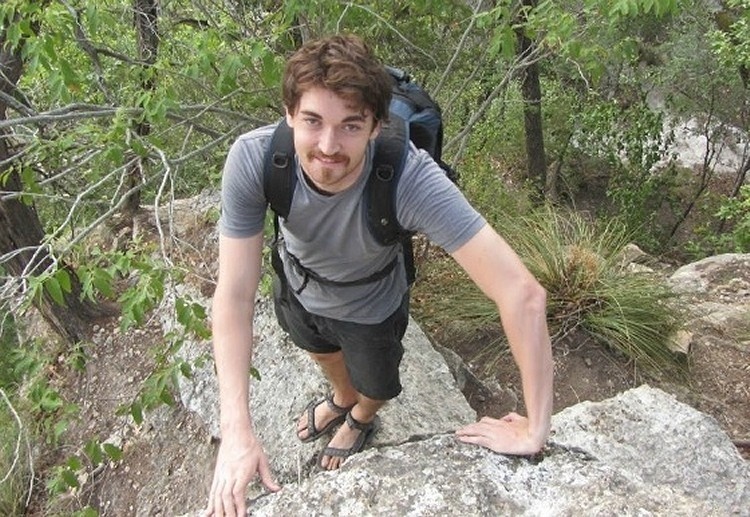 SilkRoad was founded in 2011 as an underground marketplace where internet users could buy, sell and trade illegal drugs anonymously. The reason it worked was because SilkRoad required every potential buyer and seller to use a routing service called Tor. When someone uses Tor, their IP address (geographic location) is encrypted several times over then routed all over the world to dozens of locations. Using Tor, someone could be sitting in Los Angeles but would be tracked as a zipping line that appears then disappears from one location to the next instantaneously. Tor was originally invented by the U.S. NAVY to help mask top secret messages. It has lots of legitimate uses like maintaining a journalist's anonymous sources or keeping a business meeting extra private. Unfortunately, Tor is also perfectly suited for keeping illegal transactions totally untraceable and anonymous. That's where SilkRoad came in and thrived.

Silk Road Before Being Shut Down

When it was up and running, there wasn't much of a difference between SilkRoad and eBay or craigslist. It was a website where buyers and sellers met to exchange money for goods and services. The main difference, aside from the fact that most of the products being listed were illegal, was that on SilkRoad you couldn't simply charge a credit card or use your paypal account to complete the transaction. Instead, users traded Bitcoins. What's a Bitcoin? That question alone probably deserves its own dedicated article on CNW, but for now all you need to understand is that Bitcoin is a completely anonymous virtual currency. The most recent value of a single Bitcoin was right around $130. So that means if you wanted to buy $250 worth of cocaine on SilkRoad, at today's price you would need to own at least two Bitcoins.

"I love my fed-ex guy cause he's a drug dealer and he doesn't even know it…and he's always on time." – Mitch Hedberg.

Actually, SilkRoad preferred the US Postal Service over Fed-Ex, but the late great comedian Mitch Hedberg was clearly way ahead of his time with that classic line. So you've just spent two Bitcoins to buy $250 worth of cocaine. How were these drugs delivered? Simple. The seller would vacuum seal the package then ship it through the USPS, likely with a false return address. Ironically, the Federal government was a drug dealer and they didn't even know it… for a while. SilkRoad would make money by taking a 10% commission on every transaction. It has been estimated that prior to being shutdown, SilkRoad was responsible for more than half of the daily trading volume of Bitcoins around the world.

It turns out, the FBI had been trying for over a year to unmask the mastermind of SilkRoad who they only knew by the internet handle "Dread Pirate Roberts". The FBI spent thousands of hours scouring the internet trying to find traces of his potential real identity. Unfortunately for "Dread Pirate Roberts", this internet mastermind made a few very crucial errors. First off, he accidentally used his real name and personal gmail address on at least two occasions when posting in online forums to ask questions about working with Tor and to advertise SilkRoad. The FBI was then able to subpoena some very valuable information from Google and another technology firm that ran what is called "VPN" software which was supposed to help keep Ulbricht anonymous. Through these subpoenas, the FBI was able to piece together that the vast majority of SilkRoad's operations were being run out of a coffee shop on a quiet San Francisco street. Agents then began to track Ulbricht back and forth to the coffee shop.

Here's where the story gets completely insane: According to the indictment documents filed today in New York, the FBI was able to determine that over the last two years, SilkRoad processed $1.2 billion dollars worth of transactions. In other words, 9.5 million Bitcoins have flowed back and forth between SilkRoad buyers and sellers. What does that mean for Ross Ulbricht personally? Over that same time period, the FBI determined that Ulbricht collected some 600,000 Bitcoins in the form of his commission. How much are 600,000 Bitcoins worth? At today's closing price, $78 million. At yesterday's closing price? $90 million (the price of Bitcoins dropped sharply in the wake of Ulbricht's arrest). When Bitcoins hit an all time peak value in April 2013 of $266 per coin, his virtual collection was worth $160 million. To give you some idea of how insane the market for Bitcoins has been recently, in the fall of 2011 when SilkRoad was founded, a single Bitcoin was worth just $2.

Just to re-iterare: 29 year old Ross Ulbricht earned nearly $80 million in commissions for maintaining and operating SilkRoad over the last two years. Here's a screenshot of his LinkedIn page: 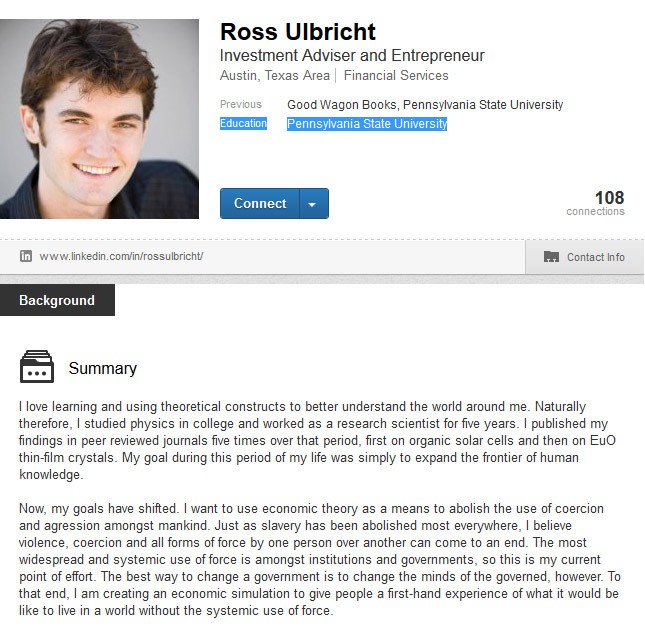 And the story gets crazier: As if operating a billion dollar illegal online narcotics marketplace wasn't bad enough, the FBI alleges that Ulbricht hired at least two hitmen over the last 12 months to murder people who were threatening SilkRoad and his own personal anonymity. He didn't know it at the time, but Ulbricht was already being closely watched by the FBI when he used $150,000 worth of Bitcoins to order a murder from a hitman he met online. The target was a former SilkRoad employee called "FriendlyChemist" who was threatening to release the identities of 5000 SilkRoad users in addition to outing Ulbricht as the mastermind of the whole operation unless he received a one time payment of $500,000. Just listen to the morbid online exchanges between Ulbricht and one of the hitmen, this all went down just seven months ago, in March 2013:

"In my eyes, FriendlyChemist is a liability and I wouldn't mind if he was executed… I have the following info and am waiting on getting his address…[He] lives in White Rock, British Colombia [with a] wife + 3 kids."

To which Ulbricht responded: "Don't want to be a pain here, but the price seems high. Not long ago, I had a clean hit done for $80k. Are the prices you quoted the best you can do? I would like this done ASAP because he is talking about releasing the info Monday."

Finally Ulbricht accepted the $150,000 price and on the night March 31st he received the following message from his hitman: "I received the payment… We know where he is. He'll be grabbed tonight. I'll update you."

And 24 hours later another message from the hitman: "Your problem has been taken care of… Rest easy because he wont be blackmailing anyone again. Ever."

It may further shock you to know that Ross Ulbricht wasn't sending these chilling execution orders from a dark room in a palatial San Francisco mansion. The FBI determined that when he wasn't operating from the library or his favorite coffee shop, Ulbricht was working out of a three bedroom apartment he shared with two roommates directly across the street from the coffee shop. Those roommates knew him as "Josh", the friendly computer programmer who paid his $1000 a month rent every month right on time, in cash. Remember, the guy was worth $80 million and simultaneously operating a business that rivals many Fortune 500 companies.

One final strange twist to this case occurred back in July 2013. FBI agents received a huge break when Canadian border control randomly chose to open and inspect a package that ended up containing several fake passports and IDs all for the same person, all addressed to Ross Ulbricht in San Francisco. Homeland security visited Ulbricht shortly thereafter with the help of the FBI. Ulbricht claimed to have no clue why or who would send him those fake IDs. Incredibly, he even used SilkRoad as a defense by claiming that hypothetically anyone could order forged identity documents "on a website called SilkRoad".

When FBI agents arrested Ross, AKA "Dread Pirate Roberts", last Tuesday, it was 3:15 in the afternoon and Ulbricht was quietly working away in the science fiction section of his local branch of the San Francisco public library. But as with every part of this story, even the actual arrest wasn't a simple operation. Before the arresting agents made their move, they were specifically instructed to hold off until AFTER Ulbricht had logged into his computer, email, social media and business accounts. This simple step will likely end up providing the FBI agents unprecedented access to a treasure trove of data that otherwise could have been encrypted and lost forever. This includes information on other participants, the Silk Road network in general and possibly even encrypted bank accounts. After Ulbricht was placed into cuffs and secured at the library, a senior IT technician working with the FBI immediately jumped onto the laptop and changed all of Ulbricht's admin passwords to each account that had been opened. Brilliant.

Ulbricht appeared in court the day after his arrest and is now facing charges in New York that include narcotics trafficking, computer hacking and money laundering. He also faces a charge in Maryland of allegedly attempting to hire a hitman to murder a witness. Needless to say, things aren't looking so great for Dread Pirate Roberts, AKA Josh, AKA Ross Ulbricht. Finally, we'd like to officially announce that from on you can buy all your drugs on CelebrityNetWorth! Kidding.