By Paula Wilson on January 20, 2018 in Articles › Entertainment

Ty Warner is the creator of Beanie Babies. You may have owned one of his famous stuffed toys in the 90s. I did. Everyone did. Ty's life story is truly remarkable. Out of all the weird ways to become a insanely rich, inventing a line of collectible stuffed dolls has to be the weirdest. Ty Warner was a failed actor and a college drop out who toiled away as a middle manager at a toy company for more than 20 years before having a life-changing epiphany while on vacation in Italy. He left that vacation early, returned to Michigan, mortgaged his house and founded Ty Inc. Today Ty Warner has a staggering net worth of $2.6 billion.  WHAT?! HOW???

Ty Warner was born in Chicago, Illinois on September 3, 1944.  He went to high school in Chicago, and then transferred to St. John's Military Academy in Wisconsin.  After graduating from St. John's, he went on to attend Kalamazoo College, but the lure of a career in Hollywood drew him away from school.  He dropped out after his freshman year and headed for Los Angeles to become a famous actor.  While he had grand plans and ambitions, actually launching a successful acting career proved difficult.  After struggling for a couple years, he returned to Chicago.  Upon his return, he began working for Dakin, the toy company behind many of the Warner Bros. and Disney stuffed animal collectibles.  He ended up remaining at Dakin for the next 20 years, slowly working his way up, and learning more and more about toy design and the business of marketing toys successfully.  After leaving Dakin, he took an extended vacation to Italy and spent some time deciding about how to proceed in the future.  At some point during this trip Ty had an epiphany. This epiphany would cause Ty to cancel his vacation early and head back to the US a revitalized man. 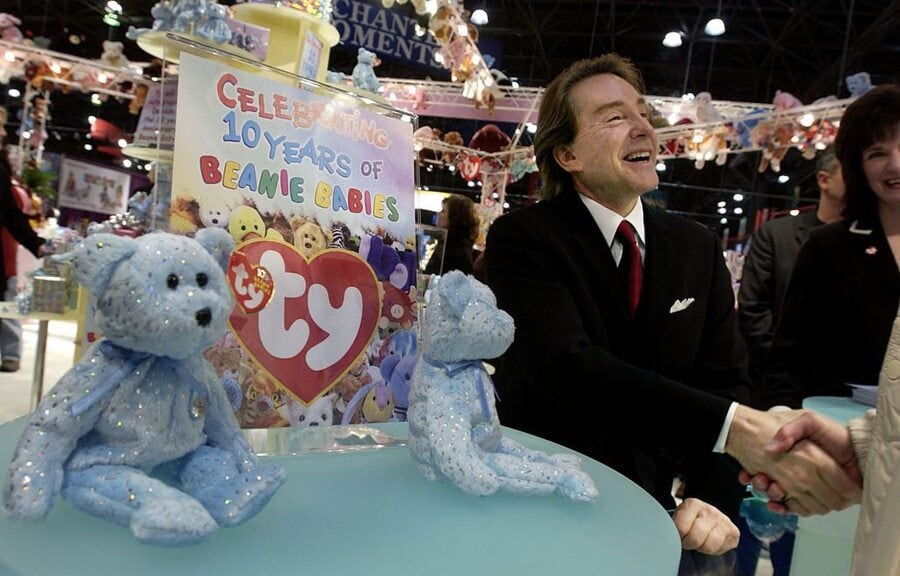 Employing the same spirit of risk that had caused him to leave school and head to California, Ty mortgaged his house and put his entire life savings into founding his own toy company.  The venture, called Ty Inc., launched in 1986.  His one toy was a plush, plastic-pellet filled stuffed animal. Maybe Ty sold his soul the to devil on that trip, because that one stuffed animal took the toy world by storm.  Beanie Babies, as the toys were called, hit the market in nine varieties in 1993.  Legs the Frog, Squealer the Pig, Spot the Dog, Flash the Dolphin, Splash the Whale, Chocolate the Moose, Patti the Platypus, Brownie the Bear, and Pinchers the Lobster became all the rage.  He launched mini versions of the toys, called "Teenie Beanies", a few years later.  They proved to be equally popular.  He also created a series of limited edition Beanie Babies, such as Garcia the Bear and Princess the Bear in commemoration of Princess Diana.  Unable to satisfy the insane demand for the toys, he often shipped them with the wrong tags and identifying information in his rush to satisfy orders.  The improperly labelled bears became collector's items, and by the mid-90s, could fetch incredibly high prices.  Counterfeit Beanie Babies began to appear and legal action was taken all over the world.  Some counterfeiters paid extensive fines and served jail time.  The world of Beanie Babies became so intense that there were even magazines dedicated to the toys.  "Mary Beth's Bean Bag World" was one of the most popular.  Click here to see the most expensive Beanie Babies in the world.

He may have been a failed actor and a college drop out, but Warner was clearly a naturally brilliant marketer. He used limited productions and secretive releases to build anticipation and create excitement around his line of dolls. The formula worked very well. So well that in 1995 alone, at the peak of the Beanie Babies craze, Ty Inc profited over $700 million.

Overwhelmed by success, Ty Warner chose to stop producing Beanie Babies in 1999. However, people were still clamoring for the stuffed animals, and he began manufacturing Beanie Babies again in 2000.  With the relaunched line, he made a shift towards the business model he had experienced while employed at Dakin.  A craze, by definition, is short-lived, and he knew the demand for regular Beanie Babies would begin to decline.  He licensed characters from popular television shows and movies, such as "SpongeBob SquarePants", "Dora the Explorer", "Shrek the Third", "Ice Age: Dawn of the Dinosaurs", and "Legend of the Guardians".  He began producing Beanie Babies based on characters from these projects, insuring that the toys remained relevant.  He also embraced the digital world, creating a line called Beanie Babies 2.0.  Beanie Babies 2.0 are equipped with a digital code that can be used to access an interactive website.  He also streamlined production and became more efficient about completing orders.

In addition to his toy business, he became known for philanthropic activities.  He donated over $6 million to the Andre Agassi Foundation for underprivileged children in Las Vegas.  Another $4.5 million went to the creation and development of the Ty Warner Park in Westmont, Illinois, and the Ty Warner Sea Center in Santa Barbara, California.  He donated over one million Beanie Babies to children in Iraq and Afghanistan, and commissioned a series of Beanie Babies modeled after important charities, with all the proceeds from their sale going directly to the charitable organization.  He even gave $20,000 to a woman trying to raise money for a potentially life saving stem-cell procedure she desperately needed.  She was a total stranger.  He'd just stopped to ask her directions and they fell in to conversation.

Unfortunately, his success and generosity hid a rather funky underbelly.  He began squirreling money away in a Swiss bank account in 1996.  This may have been part of the reason he chose to shutter Beanie Babies in the late 90s.  However, he continued to hide large portions of his income when he relaunched the line.  His illegal account was discovered and the IRS took him to court in January 2014.  At one point, his offshore account contained nearly $107 million. The IRS claims it one of the largest offshore accounts they ever found.  The largest belonged to Igor Olenicoff, who kept upwards of $240 million offshore.  Using Olenicoff's light sentence as precedent, and Ty Warner's extensive philanthropic activity, Warner's legal counsel successfully pled his sentence down from up to five years jail to two years of probation and 500 hours of community service at three Chicago-area high schools.  He also had to pay $100,000 in fines.  He has already paid a $53 million civil penalty and $27 million in back taxes.

Beanie Babies are not as popular as they used to be by a long shot.  However, Ty Warner's lucrative licensing agreements have ensured that his company will remain relevant for many more years.  Also, his fortune is not solely reliant on toy sales anymore. When Ty started raking in cash during the mid 90s, he began diversifying his portfolio by purchasing luxury hotels around the world. Today Ty Warner Hotels and Resorts owns and operates the Four Seasons Hotels in New York and Santa Barbara a resort in Kona Village Hawaii, a country club in Montecito California, a golf course in Santa Barbara, a luxury resort in Los Cabos, Mexico and more.

Ty Warner has had a roller coaster ride of a life.  He dropped out of school to become an actor. When acting didn't work out, he toiled away in middle management for more than 20 years at a toy company. Then he successfully launched one of the biggest toy crazes of all time and earned a massive fortune in the process. Today he is a multi-billionaire hotel and toy tycoon. And to think, it all started from an epiphany he had while on vacation. Excuse me while I book a one way ticket to Rome.