Exclusive Interview With Scott DeLong – The Mysterious Genius Behind ViralNova.com

By Brian Warner on December 3, 2013 in Articles › Entertainment

At some point in the last three or four months, I guarantee that everyone reading this right now has seen an article in your Facebook feed from a site called ViralNova.com. You may not have even conscientiously noticed or remembered the name of the site, but I promise the link was there from one of your friends. You may recognize a ViralNova article thanks to their tantalizingly impossible-not-to-click headlines like: "Two Boys Were Playing In Their House When They Made a TERRIFYING Discovery. Seriously, OMG."

Even if you are truly hearing about the site today for the first time, all you need to understand is that in a matter of months ViralNova has absolutely exploded in popularity. After barely even existing earlier this summer, today ViralNova gets more traffic than massive online media outlets like Dailymotion, Gawker, Bloomberg, ign, People, Gizmodo and the New York Post, just to name a few (according to Alexa.com). A meteoric rise like that was bound to raise some eyebrows and ruffle a few feathers in editorial rooms around the world. What is this site? Who runs it? Is their traffic real? The flames of curiosity were flamed even more when you visited the site or attempted to contact the owner and received either a) No response or b) A terse but polite blow off. 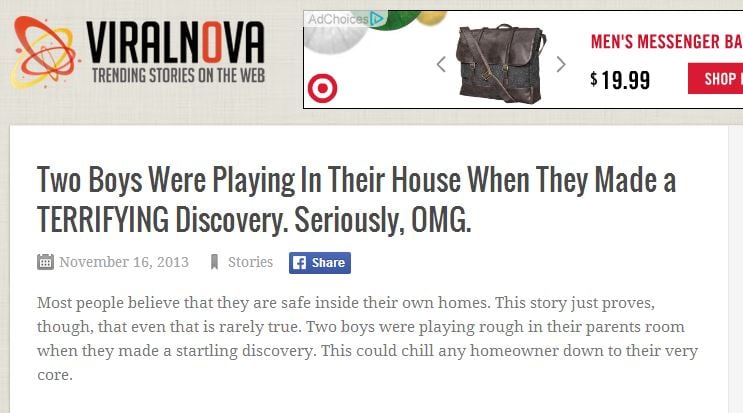 As curiosity about the site's mysterious origins peaked, several newsrooms launched what some might call a fact finding mission, and what others might call a witch hunt to find out who was behind the curtain. Was it a new startup with dozens of employees? Nope. Was it an offshoot of an existing web behemoth like BuzzFeed or TheHuffingtonPost armed with a multi-million dollar war chest? Nope. Was it one guy working alone out of a house in suburban Ohio with a window that looked out onto a snow covered corn field? Yes. ViralNova.com, a site that is currently the 166th largest internet property in the United States is owned and operated by one person. And that person is named Scott DeLong. Scott runs the site without any employees and without a dime from venture capitalists. And, by himself, he is currently running circles around companies that have dozens (maybe even hundreds) of employees and tens of millions of dollars worth of investor backing. And there's one more twist to the story. Scott DeLong happens to be one of my best friends. We've known each other for years and typically check in once a day to trade ideas and find out how things are going. Here is a photo of Scott hover-handing (supposedly on purpose) Community star Alison Brie: 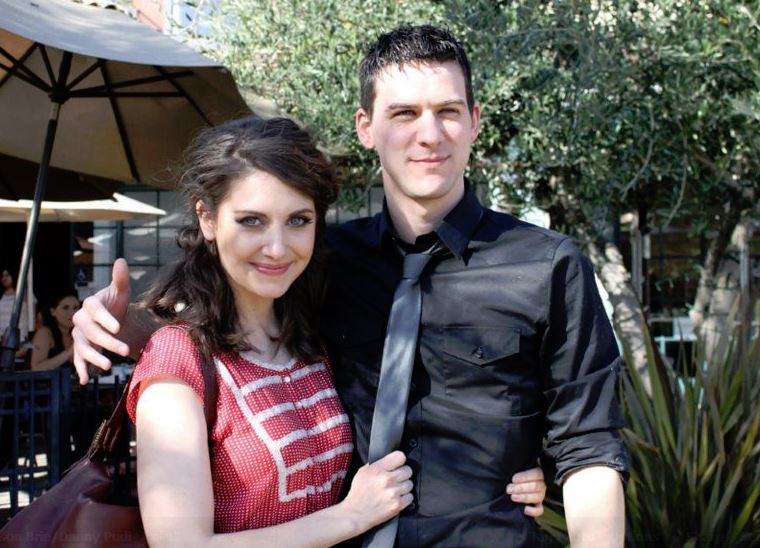 Now that the big mystery has been revealed, Scott agreed to sit down with me (over instant messenger) and talk about his secrets to success. In my opinion, his answers not only apply to creating extremely successful websites (which Scott has done many times over), but they can be applied to anyone looking to start any kind of business or achieve any sort of goal in life. I can definitely say that these tips played a big part in helping CelebrityNetWorth become big enough to allow me to not have a day job, hopefully forever.

First off, you've successfully launched and sold a bunch of web properties in the last decade. In your expert opinion what do you think of the Snapchat founders turning down a $3 billion cash offer from Facebook?

Ha ha ha. Fair enough. So what's the secret to you success and how did you make ViralNova so massive?

First, I want to preface this by saying that I'm not speaking out of arrogance or under the suggestion that I am some kind of successful superhero. I'm basically doing this interview for three reasons: 1) For some reason there seems to be a lot of curiosity about who I am right now. 2) I have had multiple friends and not-really-friends ask me in recent times how they can get out of their job, make more money, or otherwise find success. 3) After looking at statistics showing the average net worth and debt of a 30 year old, I can safely say that I have the credentials to at least give my opinion. I can also say that the average 30 year old's situation makes me extremely happy not to be an average 30 year old. Furthermore, I'd like to point out that in my experience money really doesn't make you happier, but the fact that I haven't even thought about whether I can afford something in years is admittedly a nice feeling. It's one that I would wish on any of my friends and family.

Do you think there is a specific set of rules that help someone be successful?

Yes. And I've actually thought about this enough to come up with five specific rules or "keys" to success. So here are my rules:

1. Accept That It Won't Be Easy

Most people who are looking to "get rich" want it fast and right now. That's why get rich quick schemes are so popular. If you are drained from your crappy $5/hour job and you dream of a much wealthier life, yet at no point in your dream do you think about HOW you would achieve it, then congratulations – you'll never succeed. On the bright side, you're very normal. On the not-so-bright side, your financial situation will never change.

Finding success, particularly when venturing into your own business, just isn't easy. In fact, it's much more work than going to a job and collecting a salary. But the rewards are far, far, far greater….the freedom, flexibility and ultimately the money are worth it. If you found yourself getting a warm, defeated feeling while reading that it's not easy, then you're likely the kind of person who doesn't have what it takes. You're looking for EASY, not SUCCESS. And one is realistic, based on drive and motivation; the other is lazy, based on laziness.

This is probably the #1 most important factor, so ignore the part where I put it #2. This isn't in any order.

You literally need an almost unhealthy obsession with your business or job. Unfortunately this can create a counterproductive problem where the obsession completely negates the freedom and flexibility that self-employment/wealth supposedly brings. So you do need to find a balance. But if you find yourself choosing fun over business too often, then you'll fail. It's the sad fact. That being said, life is too short to work yourself to death, so that balance is really critical.

For me personally, I spent 5 years completely obsessed with business. I sacrificed my social life and nearly lost the ability to even know how to have fun. It did, however, pay off and now I am getting back to enjoying life with a lot more freedom and a lot more money. Like anything difficult, it's worth it in the end. So obsess over your venture…if you find yourself thinking about it around the clock, it's almost impossible to fail because you clearly want it bad enough to do anything to get it. And that's what it's all about.

3. Passion for Whatever You're Doing

Passion and obsession are different. Obsession is more about being obsessed with succeeding. Passion is loving what you do. If you can choose something you hate – and be successful at it – then you're some kind of business marvel who should write a book immediately. I've always failed trying things that I hate or don't have a passion for.

There is, however, a fine line between your passion and what can make you wealthy. If your passion is taping bees to picnic tables and lighting them on fire, you're probably not going to start a business or find a job in that field. There may be a nice cozy room for you at the nearest asylum though.

So gravitate toward what you love but also what is marketable. In the example of the bee-lighting psychopath, there probably is something related that he (or she) could pursue. I'm not going to attempt to think about what it is.

4. Innovation and Knowing Your Market/Business

So let's say you've accepted success doesn't come easy, you love what you're about to do, and you can't stop thinking about it. Now it's time to be the best. It doesn't matter what market you're in or whether you have a business or you're working for someone else, you can always work toward being the best. The good news is that this drive should come naturally to you if you have the 3 keys above.

Look at your competitors and those around you. Know them as well as they know themselves, and learn from it. Learn how you can be better. You can always be better if you want to be. If you don't believe you can do something, then you can't. Corny, maybe. But very true.

I would also recommend reading as much material on your field as possible. You can't be the best without also being the most well-informed and educated on the subject. So, read, read, and then read a little more. Side note: I hate that read and read (past tense) are spelled the same. Why can't it be red? Oh…nevermind. Maybe redd. I redd a book yesterday. Yeah, that's perfect.

5. Accepting Failure and Moving On

So you have all of the keys to success. A great idea or great position, the love and obsession needed, and all the research and innovation needed to beat all the competitors. But for some reason….you still fail.

In two words: It Happens. In two more words: Move On.

You've heard the quote a million times from Thomas Edison after "failing" 10,000 times. He took it not as 10,000 failures but learning 10,000 ways that don't work. Every time you fail, you learn something about what it takes to succeed and it will ultimately make you succeed at a higher level than you ever imagined. I wouldn't only say failure should be accepted, but I'd go as far as to say it's NECESSARY to succeed.

So always embrace failure, pick yourself up, and move on. I have failed more times than I've succeeded, but the successes have made up for the failures 100-fold. Remember, it only takes one great idea to change everything.

Wow. That is awesome truly advice that I 100% agree with. Whether intentionally or accidentally, I can see how every single point above had some sort of impact on the creation of CelebrityNetWorth. The only other thing I would add to the above, especially if you are thinking about doing an internet idea, would be do whatever it takes to pay for everything yourself. Resist taking on an investor as much as possible because it will force you to find a way to launch your idea in an affordable way and will allow you to own as much of it as possible if and when it becomes successful. In the very early days of CelebrityNetWorth, I was approached on a few occasions about taking a $100,000 or even $300,000 investment in exchange for a huge chunk of equity. I have no idea what I would have done with that money, but I am really glad to not have some annoying investor looking over our shoulders every day now giving us bad advice and telling us what to do.

So what does the future hold for ViralNova?

I'm not sure what the future holds for ViralNova because the Web changes very quickly. But by sticking to those basic, fool-proof keys to success, it's literally impossible to fail. Looking forward to all the challenges ahead for ViralNova.

And with that he's gone. Poof. Like a hover-handing Keyser Soze. Good luck with everything Scott, psyched to see what happens with ViralNova in the future!