By Brian Warner on August 22, 2014 in Articles › Entertainment

August has been a crazy month for Steve Ballmer. Just ten days ago, a California judge officially ruled that Steve's $2 billion offer to buy the Los Angeles Clippers NBA franchise would be approved and finalized. The ruling put an end to a very ugly and very public three month legal battle launched by the team's former owner, racist slum-lord Donald Sterling. Then, earlier this week Ballmer announced his resignation from Microsoft's Board of Directors, effectively ending a 34 year relationship with the software giant. His resignation meant that Steve would no longer be directly involved in Microsoft's operations except as a shareholder (a big shareholder). It's actually kind of crazy to think about how much both Steve and Donald's lives have changed in the last 12 months. Last August, Steve was still serving as full time CEO of Microsoft, a position many industry followers never thought he'd never actually relinquish. And at the same time, back then the idea that Donald Sterling was mere months away from being forced to sell his beloved Clippers in the wake of a racial controversy sparked by a jilted mask-wearing mono-syllabic mistress, would have been totally inconceivable. We all pretty much know how Donald ended up in this position by now, but what exactly is Steve Ballmer's life story? We know he got rich from Microsoft, but how'd he end up there in the first place? And what happens now that he's leaving Seattle to focus full time on the Clippers? 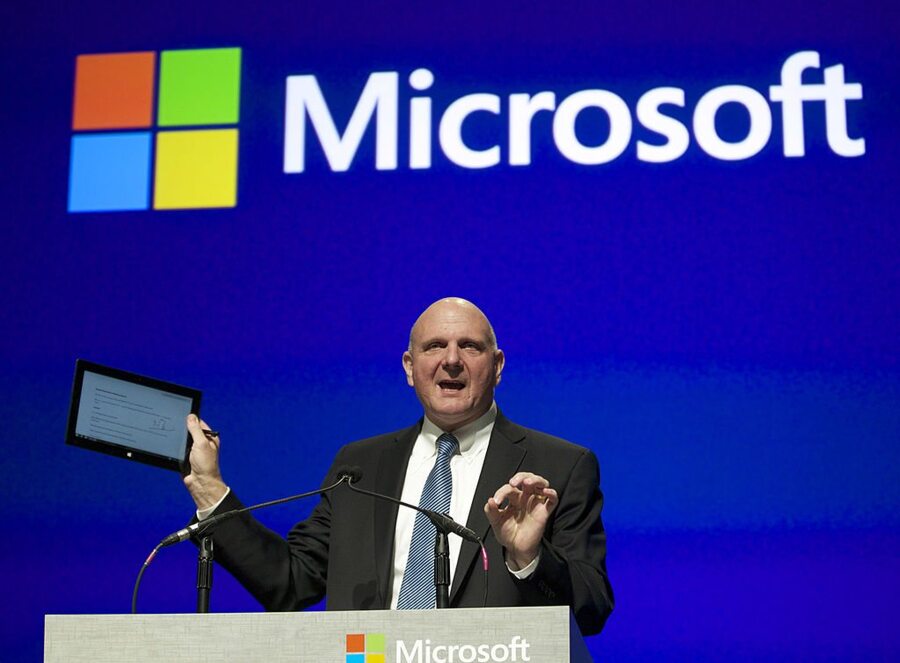 Steven Anthony Ballmer was born on March 24, 1956 in Detroit Michigan. His father was a manager at Ford who had previously served as an interpreter during the Nuremberg Nazi trials after World War II. The Ballmers lived a comfortable upper middle class life in Farmington Hills, Michigan. He attended Detroit Country Day School and took engineering classes for fun at a local technical university. At a very early age, Steve showed signs that he was a math whiz. While other kids played sports during the summers, Steve went off to math camp. After scoring a perfect 800 on the math portion of the SAT, Steve was admitted to Harvard University where he would eventually major in both math and economics.

While attending Harvard, Steve befriended a geeky looking kid who lived down the hall in the dormitory. It was an odd friendship. Ballmer was big and loud, almost jock. His friend was puny, socially awkward and mostly wanted to talk about computer algorithms. But they quickly became almost inseparable best friends. That geeky little kid was named William Henry Gates, III. Better known today as Bill Gates, the richest person on the planet.

In the 1975, the middle of their Junior year, Bill announced to Steve that he was leaving Harvard to launch a software company in Albuquerque, New Mexico with his childhood buddy Paul Allen. Ballmer thought his friend was insane. People dont drop out of Harvard! Especially not to start some silly little computer company in Albuquerque! Keep in mind that this was at a time when there were probably no more than 1000 computers on the whole planet, most of which took up an entire room.

So Steve stayed at Harvard, where he in 1977 he graduated magna cum laude. Bill again tried to persuade Steve to join him and Paul Allen at their software company which was now called "Microsoft" and would soon relocate to Seattle. But Ballmer was still not having any of it. Not only did he barely understand what Allen and Gates were doing with this computer software, but Ballmer already had a job offer in hand from the prestigious consumer goods company Procter & Gamble. Steve would go on to work as a product manager at P&G for two years where he mainly marketed Duncan Hines Moist 'n Easy cake mix. Simultaneously, he also began attending Stanford Business School.

Between 1975 and 1979, Microsoft had proven itself to be much more than a silly little software company. When Bill came knocking on Steve's door again in 1980, he could no longer resist. Steve quit P&G and dropped out of Stanford to run the business side of Microsoft. He officially became the 30th employee of Microsoft on June 11, 1980.

Steve's starting salary was $50,000. That's equal to $144,000 a year. Not bad for a 24 year old who knew practically nothing about computers or software and who had spent the last two years selling cake mix. On top of his salary, Steve was also given a percentage of the company. When Microsoft officially incorporated a year later in 1981, Steve owned 8% of the company. Bill Gates owned 45% of the company and Paul Allen owned 25%.

That was 1986. As we all know now, over the next two decades, Microsoft software would pretty much revolutionize the entire world. If you had invested just $100 in Microsoft back in March of 1986, today you'd be sitting on around $1.5 million dollars. So you can imagine what happened to the bank accounts of people who owned more than $100 worth of MSFT…

As Microsoft exploded in growth, Gates, Allen and Ballmer became extraordinarily wealthy. Ballmer was one of the first people in history to become a billionaire from stock options as an employee of a company that he did not found. He eventually rose to the rank of company President before over taking Gates as CEO in 2000.

Over the years, Steve sold roughly $3.4 billion worth of his Microsoft shares and received roughly $3.4 billion in stock dividends. Last May, Steve became the largest individual shareholder in Microsoft after Gates sold 4.6 million shares. Over the years, Gates has slowly reduced his stake in Microsoft in order to fund his philanthropic efforts and build a more diversified portfolio. As of this writing, Gates only owns around 4% of Microsoft. Ballmer owns 333.3 million shares of Microsoft which make up roughly $15 billion of his $20 billion net worth.

Ballmer was replaced as CEO by Satya Nadella in February of 2014. Over the last six months, Ballmer has transitioned away from Microsoft until this week when he resigned completely from the board. It's unclear what kind of influence Steve may try to have over Microsoft in the coming years. Maybe he'll be totally silent. Maybe he'll be calling Satya once a week. After all, he is still the company's largest individual shareholder, and the stock represents 75% of his net worth, so you could understand how he might still want to keep a foot in the door. But for now, Steve claims his entire focus will be on the Clippers.

Today Bill Gates and his $85 billion net worth are mostly focused on philanthropy. Paul Allen hasn't been actively involved in Microsoft in many years. Allen owns the Seattle Seahawks of the NFL, the NBA's Portland Trail Blazers and the Seattle Sounders MLS team. And poor old Donald Sterling? Hopefully we wont hear much from him ever again.