By Joey Held on January 4, 2015 in Articles › Entertainment

After a very thrilling NFL season, we were promptly treated to a ton of blowouts on Wild Card Weekend. But the final game was fantastic, and there were still some cool things going on–in case you missed it, here are the highlights from the first round of the playoffs.

Talk about redemption! Dallas's Demarcus Lawrence sacked Matthew Stafford on fourth down during Detroit's final drive, forcing a fumble that he also recovered for the coveted "strip sack recovery" trifecta. It was Lawrence's second fumble recovery of the game–the first one came a few minutes earlier, when he picked up a loose ball before fumbling himself and giving it right back to the Lions.

Baltimore stumbled into the playoffs, losing to a Houston team led by Tom Savage, and barely beating a Browns squad that trotted out Connor Shaw in his first career start. Good thing none of that matters. The Ravens thoroughly outplayed the Steelers in a 30-17 win, marking their first postseason victory in Pittsburgh in franchise history. And, as is the Ravens way, they did it with hard-hitting, aggressive defense. They sacked Ben Roethlisberger five times. Darian Stewart picked off a pass in the end zone and recovered a Heath Miller fumble. Terrell Suggs even secured an interception with his legs, and the next play went to Crockett Gilmore (no relation to Davy or the Girls) for a 21-yard touchdown. Gilmore only had 10 catches during the regular season.

The Carolina Panthers may have snuck into the postseason with a 7-8-1 record, but they looked great in a record-setting performance against the Cardinals. The Panthers held Arizona to just 78 total yards (and a mere 12 in the second half), forcing three turnovers and sacking Ryan Lindley four times.

If you're a fan of kicking, you definitely dug the Colts/Bengals game. Adam Vinatieri kicked four field goals, and extended his streak of consecutive made field goals at home to 37. On the other side, Mike Nugent, who hadn't made a field goal of 50+ yards all season, set a Bengals postseason record with a 57-yarder at the end of the first half. It's the second-longest postseason kick in NFL history.

Hooray long passes! Golden Tate caught a 51-yard touchdown less than four minutes into the game, then Terrance Williams made a 76-yard grab to finally put Dallas on the board in the second quarter. Both catches were short slant patterns that the receiver took to the house. Tate also threw a very well-timed block on the Lions other touchdown, an 18-yard rush from Reggie Bush. 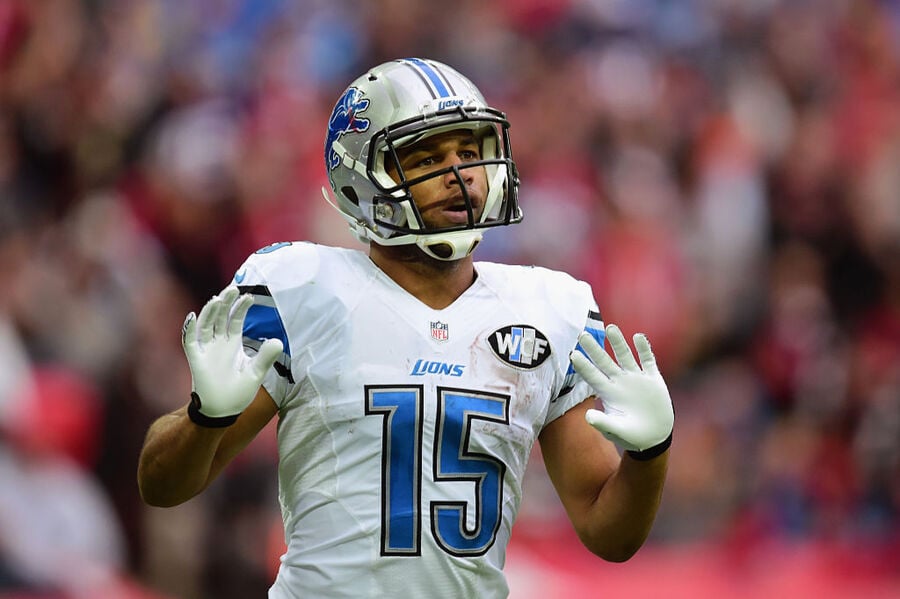 The Lions may have blown a 14-point lead, and they certainly weren't aided by a pair of defensive holding penalties during the Cowboys game-winning drive or a false start by Calvin Johnson on their own final drive. But there was one flag (or rather, non-flag) that will have Detroit fans crying foul all season long. On third-and-one from the Dallas 46, Stafford threw a pass to Brandon Pettigrew. It was deflected by the Cowboys' Anthony Hitchens, who never turned his head around to make a play on the ball. A flag was thrown for pass interference. Nearly half a minute later, it was picked up, and all of a sudden the Lions were facing fourth down. The ensuing punt went just 10 yards, and the Cowboys marched down the field and scored the winning touchdown. Mike Perreira was in the booth to give his official…well, official's opinion. He said it was pass interference. Obviously, interference is a judgment call, but the picking up of the flag is what was really confusing. The officiating team could have at least given some sort of explanation as to why they were reversing the call, but instead, it's just another long offseason for the Lions, and another chance for conspiracy theorists to come up with some detailed rants. Hopefully they include some pie graphs.

Arizona couldn't get anything going offensively; even their two touchdown drives started at the Carolina 30 and 17, respectively–and the first one was aided by a 15-yard unnecessary roughness penalty. Ryan Lindley had two interceptions, including one to Luke Kuechly in the end zone, and as a team, they rushed for 27 yards on 15 carries. Despite all of that, it looked like they'd avoid setting a historically bad record for futility. Then the final play of the game happened. The Cards started lateralling across the field, eventually losing 19 yards. Getting in the record books is always a good goal, but this probably isn't the way to do it.

Pittsburgh desperately missed Le'Veon Bell Saturday night. The AFC's leading rusher was inactive with a knee injury, and the Steelers felt it. Josh Harris and the recently-signed Ben Tate combined to rush 14 times for 44 yards. The running backs weren't the only ones to blame, though–the Steelers committed eight penalties for 114 yards, and had costly turnovers at inopportune moments. The biggest one came when Roethlisberger, who had missed the previous three plays due to a head injury, threw an interception into the end zone on his first pass since re-entering the game. The throw was a terrible decision already, but being underthrown gave Antonio Brown zero chance of catching it. This might be the only time in history the following statement will be uttered, but maybe the Steelers should have stuck with Bruce Gradkowski. He went 2-for-3 for 22 yards in quick relief of Roethlisberger, including picking up a first down two plays after coming in on third-and-21.

The Bengals scored a grand total of zero points during a regular-season loss to the Colts. They were a little bit better on Sunday, but not by much: they managed just 10 points. Andy Dalton went 18-for-35 for 155 yards and lost a fumble, though he really didn't have much of a chance to succeed. The Bengals offensive line hardly gave him time, and his receivers dropped a few catchable balls, as well. Meanwhile, Jeremy Hill, who had a productive 36 yards and a touchdown after the first quarter, only had 11 yards the rest of the game. Marvin Lewis has now gone winless in the postseason in 12 years as Cincinnati's head coach.

Most Interesting Facts From The Wild Card Round

The two Saturday games both featured a safety as the final scoring play.

No player in the Panthers/Cardinals game had more than 39 receiving yards.

Indianapolis started three separate drives from their own 9-yard line in the first half.

Andy Dalton is just the second quarterback in NFL history to lose his first four playoff games. The other? Y.A. Tittle.

The Lions 99-yard touchdown drive was the first such drive in the postseason in 13 years.

Favorites went 2-2 against the spread, and 3-1 straight up. The under total went 2-1-1, as well, with the late safety in the Ravens/Steelers game causing our only push of the week.

Biggest Upset: On the other side of things, 56% laid at least a field goal with the Steelers. It did not pay off.

Indy is the prime candidate for this year's "Good Bad Team," in that they'll crush bad teams but struggle with better ones. They lost to Denver by exactly seven points the last time they played, but I think the extra week of rest helps Denver, and they roll to a comfortable win.

The Patriots always seem to struggle with the Ravens in the postseason, at least in recent history. I don't believe the Ravens will win, but I think they can keep things within a touchdown.

Can the Cowboys keep their postseason success going? They can certainly challenge Green Bay's shaky secondary, and DeMarco Murray should have a field day. But it's very difficult to go against Green Bay at Lambeau. My best guess is a late touchdown by Dallas gets them the cover in a losing effort.

Carolina has played Seattle pretty close in its last few matchups. Granted, those games were all in Carolina, but the Panthers have won five straight and looked like a semi-competent team over the past month. Couple that with the Seahawks maybe being a bit rusty after the bye, and you've got an underdog that can (hopefully) cover this giant spread.