Everyone knows that the President of the United States flies around the world on an incredible plane called Air Force One. But did you know that the US government actually owns TWO Air Force Ones? They are identical Boeing 747-200s that have been active for nearly 30 years. These two planes have transported five different Presidents during their service run, but because of their age, they will both be retired in 2017. So what happens next???

Last week, the Pentagon announced it will spend $1.65 billion between 2015 and 2019 to pay for the two Boeing 747-8 replacement jets. The Boeing 747-8 isn't a highly sought after plane. Only 18 were ordered and produced last year. And with good reason–they're expensive! If you were thinking of getting a 747 for yourself, with none of the thrills that come along with being the leader of the United States, it would run you about $368 million. I wonder if the government gets a discount for buying in bulk?

"Air Force One" isn't even the name of the plane. It's a callsign for any Air Force flight carrying the President. If Obama hops aboard a dilapidated, run-down Air Force delivery plane for an interstate flight, or a tiny puddle jumper in the Florida keys, that vessel will enjoy a few moments as Air Force One. Richard Nixon, who resigned from the presidency in 1974, boarded a flight that took off as Air Force One, and landed as SAM 2700–the type of plane used at the time–reflecting the fact that Nixon no longer held the highest office in the land.

The current planes can hold over 53,000 gallons of fuel, and weigh about 833,000 pounds. They have the ability to refuel in mid-air, but even without refueling, a single tank would take them halfway around the world.

Air Force One flights have a "protection level one" security status–that's the equivalent of a nuclear weapon–and airmen are allowed to use deadly force on any unauthorized personnel. So if for some reason you were planning to charge the plane, definitely DO NOT do that.

Speaking of airmen, the Air Force has had its fair share of notable alumni. Second man on the moon Buzz Aldrin flew 86 combat missions, including shooting down two enemy aircraft, while serving in the U.S. Air Force during the Korean War. George Carlin and Morgan Freeman both served as Air Force radar technicians–Freeman actually turned down a drama scholarship from Jackson State University to serve. J.R. Cash tried to enlist in the Air Force, but recruiters didn't allow initials, so he went with John R. Cash, instead. You probably know him better as music legend Johnny Cash. And for Trekkies, Gene Roddenberry, the creator of Star Trek, flew combat missions in the Pacific during World War II. When he left the Air Force, he had flown 89 missions and earned the Distinguished Flying Cross and the Air Medal.

Even two Presidents have served in the Air Force. In 1937, Ronald Reagan enlisted in the Army, then transferred to the 18th Army Air Force Base Unit in 1942. Another name for this unit is the First Motion Picture Unit. Reagan left active duty at the rank of captain on December 9, 1945. In 1968, George W. Bush joined the Texas Air National Guard of the U.S. Air Force, and trained as a fighter pilot. In 1973, he transferred to the Air Force Reserve, where he was honorably discharged at the rank of first lieutenant one year later. 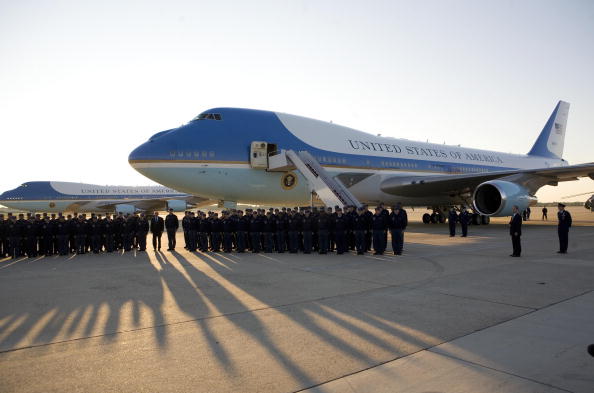 What about the inside of the planes? What's that like? Contrary to what the movie Air Force One tried to tell us, there is no actual escape pod. And each president gets their own unique pilot and crew.

The plane has 85 telephones, 19 televisions, and a handful of two-way radios, fax machines and computer connections. The onboard electronics include about 238 miles of wiring, or twice the amount you'd find on any typical 747. Thanks to heavy shielding, even the electromagnetic pulse from a nuclear blast won't damage the most crucial electronics and wiring. The plane is also equipped with electronic counter measures to jam enemy radar, and can eject flares to cause heat-seeking missiles to go off course. 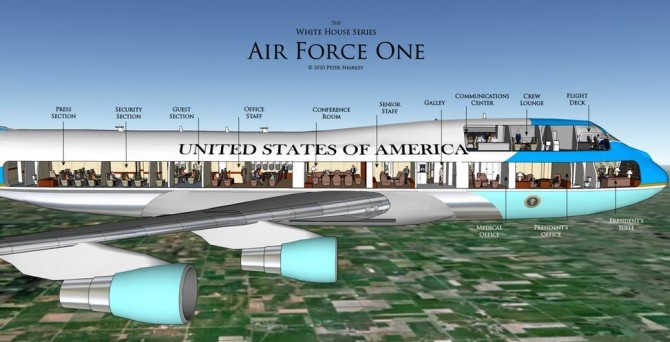 As far as capacity, the plane has about 4,000 square feet of floor space on three levels. It can comfortably carry 70 passengers and 26 crew members, who provide service around the clock. All crew members–yes, even the chefs–are carefully screened military personnel, with top-notch service histories. The chefs, in fact, are required to purchase all ingredients while incognito, shopping at random markets to avoid any chance of poisoning.

The president generally hangs out in the nose of the plane–at least, that's where the private quarters are for him and the First Family. There, you'll find two couches that can convert into beds. Next door is a meeting room–the "Oval Office In The Sky." Further along the plane are more meeting rooms, other private areas for staff members and guests, two kitchens (which can feed 100 people at a time), and a medical annex where surgery can be performed, if need be. The President can also bring small workout equipment, like a stationary bike. After all, it's important to walk around every once in a while on a flight, even if you're the Commander in Chief.