By Paula Wilson on January 11, 2015 in Articles › Entertainment

Religion is a funky construct. While amazing things have happened in the name of various and sundry deities, some of the world's greatest atrocities have also been perpetrated in the name of those very same deities. Why people choose to believe what they believe is almost as fascinating as what they believe. For some people, religion can become a compulsion, an obsession or a type of discipline that becomes the only thing that separates them from simply falling apart. Over the years there have been many people who have preyed on those people who desperately need guidance, no matter where it comes from. One of the most successful of these opportunistic personalities was the late Sun Myung Moon, the founder and head of the Unification Church. Not only did he manage to recruit millions of followers, he also became a rather powerful political figure, and a billionaire. A multi-billionaire in fact. With an estimated net worth of $3 billion at the time of his death, this child of farmers took his religious message and carried it all the way to the bank.

Sun Myung Moon, also known as Mun Yung-myeong, was born on February 25, 1920 in what is now known as the North P'yong'an Province of North Korea. At that time, Korea was ruled by the Japanese. Moon's family practiced Confuscianism and then became Presbyterians in the early 1930s. He began speaking of himself as a new messiah when he was 15 years old, claiming that Jesus Christ had given him the responsibility of completing his unfinished work by "becoming parent to all humanity". However, before he could carry out Jesus' wishes, he had to finish school. He went on to attend Waseda University in Japan, where he majored in Electrical Engineering. After joining the Communist Party as part of the Korean independence movement against Japan he returned to South Korea where he got married and had his first child. Post World War II , Korea was divided into North and South Korea. Regional tensions ran very high. Over 150 Christian religious leaders were killed or forced into labor camps during the late 40s. Moon was accused of spying for South Korea and was sentenced to five years at Hungnam Labor Camp. He later escaped and ran to Pusan, South Korea. 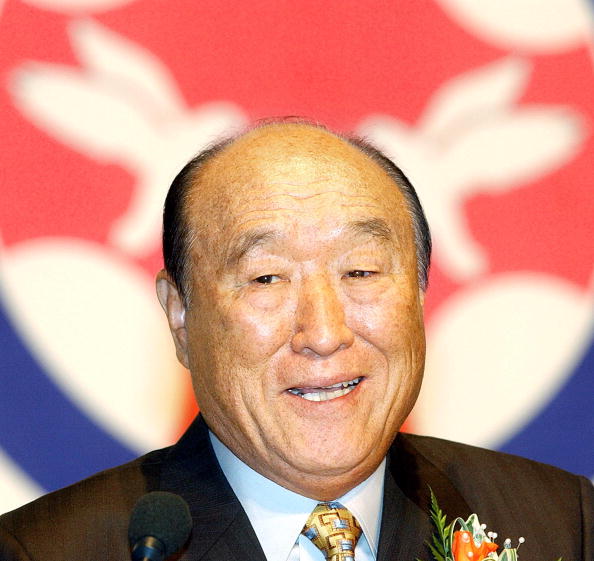 His time in the labor camp changed him irrevocably. He became an anti-communist and viewed the conflict between democracy and communism as a Biblical struggle, with communism representing Satan and democracy – God. In his mind, Korea was the front line for this struggle as the country was divided along these political lines. Now a preacher, he shifted his focus to family-friendly sermons that featured his own unique views on the Bible. By the mid-50s, he was able to found his own church which he named the Unification Church. The church is also known as the Holy Spirit Association for the Unification of World Christianity. 12 years later, he published his first theological text: "Exposition of the Divine Principle". Co-written with one of his many, young acolyte/followers, the book outlines Moon's belief systems. For his followers, it was viewed as almost equal to the Bible in importance. At the same time, other Protestant churches around the world condemned the book. Most controversial were Moon's ideas of "indemnity", in which a person could regain their good standing with God by performing good deeds on Earth that essentially cancelled out anything bad they had done before.

Moon gained even more religious enemies when he began preaching that Jesus was supposed to have redeemed humanity by marrying, and completing Adam's work. However, since he was crucified before marriage Moon believed he only saved humanity spiritually, not physically. Moon felt that it was now his job (along with his second wife, Hak Ja Han) to complete Jesus' work. At the time of their marriage Moon was 40 and Han was 17. They became known as the "True Father" and "True Mother" to their followers. Their biological children were known as the "True Children". In 1961, Moon began performing what he called "blessing ceremonies". At a "blessing ceremony", multiple couples dressed in identical clothiers were married all at once. Often times, the members of each couple were meeting each other for the first time… at their wedding. Moon's first "blessing ceremony" had 36 couples. By the early 80s, he was marrying as many 2,000 couples per ceremony. The ceremonies, which were widely publicized, became the international image of the Unification Church: 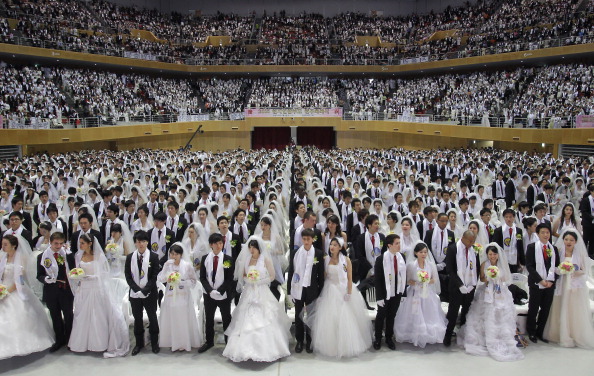 In addition to the mass weddings, Moon became known in the Western World for his public speeches. Given all over the world throughout the 70s, Moon's viewpoint seemed to strike a nerve in many politicians and world leaders including Richard Nixon. He subsequently founded his own newspaper, The Washington Times,  which became a favorite of multiple Washington heavy hitters, like Ronald Reagan. He began to have more and more political power, meeting with foreign Presidents and Leaders, such as Mikhail Gorbachev. However, it all came crashing down in 1982 when he was convicted of tax evasion and conspiracy. He spent 13 months of his 18-month sentence in jail before being released early.

Prior to his jail sentence, Sun Myung Moon was on the fast track to becoming one of the most powerful religious and political figures in the world. He made generous donations to numerous Western universities and received honorary degrees from most of them. His followers were said to number in the millions and were spread out over 180 countries.

The jail time tarnished his reputation in the Western World and his popularity began to wane. But none of this fazed him. He sponsored conferences with the United Nations, brokered peace talks between North and South Korea, launched the Peace Cup – an international soccer tournament, and founded the Universal Ballet, a company that was widely considered to be Asia's best ballet company in the 90s.

However, his belief that he was the Messiah and his penchant for inviting high-ranking officials to his religious gatherings without telling them that that's where they were going, began to try everyone's patience. His number of followers started to dwindle and his influence began to disappear. At his death, the Unification Church had fewer than 200,000 members. It was a huge drop from the nearly seven million people who hung on Moon's every word in the 70s and 80s.

No one quite knows how much the church was worth at his death, but the aforementioned $3 billion estimate is generally accepted to be the ballpark. Even though Moon had fewer followers, he still had managed to create an empire with multiple business ventures in multiple countries. Additionally, he may have continued some of his fraudulent money practices. At the end of the day, Sun Myung Moon was a study in contradictions. For all of his talk about being the new Messiah, and the father of humanity, he had a strange habit of functioning very much like a common thief. Did he truly believe his own hype? We'll never really know. He passed away in 2012.