Chances are, if you've had a massage, facial, or other spa service, you've heard Enya's music. It is strange and ethereal and actually sounds like something that might be played in a church. She moans in different languages over haunting melodies. The songs are hard to tell apart, frankly. Would you be surprised to learn that she has more money than Adele and has sold more records than One Direction? Would it shock you to find out she lives in a castle full of cats and her neighbor is Bono? This is the weird world in which Irish singer Enya lives. Enya has a net worth of $140 million.

It is safe to say that Enya has had an incredibly successful career. She's a singer, songwriter, and musician and has been a steadily-selling artist for decades. Enya shuns the limelight and the trappings of celebrity. She's never dated another famous person or been seen out on the red carpet, surrounded by paparazzi. In fact, one of her friends has said that Enya is not the pal you call when you want to go grab a beer. She's not fun like that.

Enya has sold more than 75 million albums globally and has never toured as a solo artist. The single 54-year-old is the richest woman in Irish and British music history and she did it without touring. 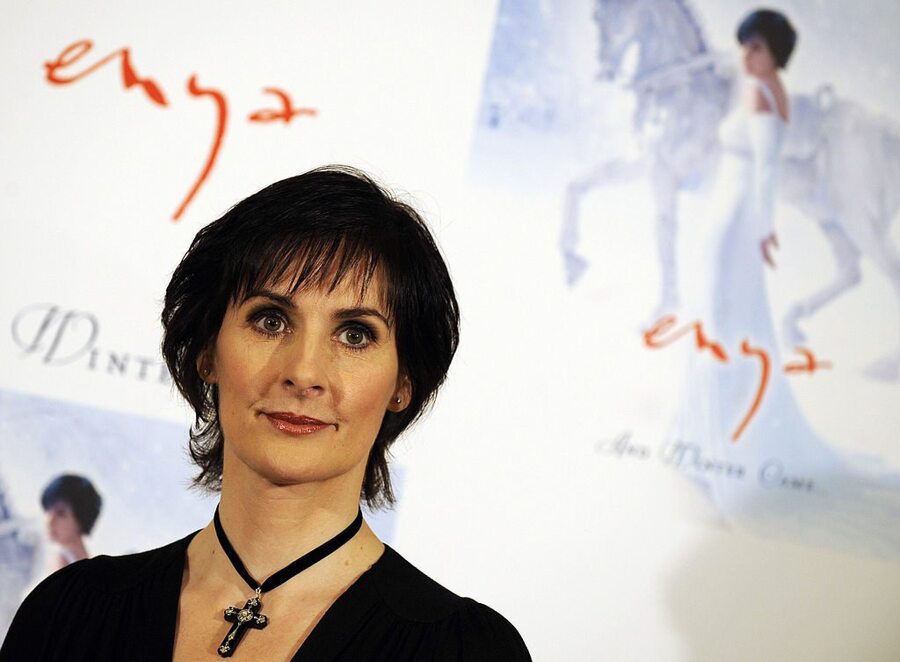 Would it surprise you to learn Enya is a recluse? (We're betting not, given both the tone of her music and that castle full of cats.)

The Irish songbird has been seen out in public only two times in the past decade. Both of those times she was alone and shopping for Christmas gifts. She spends her days hiding out in her home near Dublin. Fan mail is delivered to her house regularly, but Enya refuses to respond to those letters from her devoted fans. Apparently, even her close relatives barely see her. Enya's only companions are her cats and a handful of household staff.

Enya was born Eithne Ni Bhraonain, in Gweedore County, Donegal, Ireland. Enya is a phonetic spelling of how her first name is pronounced in her native Gaelic. She is the sixth of nine children in her family. She was a shy girl growing up who loved singing and playing the piano. Her family was musical and when Enya was 19 years old, she joined her family's band, the Celtic music group Clannad. She played the synthesizer and sang backup vocals.

Two years later, she quit the band and moved into the home of 69-year-old Nicky Ryan and his 61-year-old wife Roma. Nicky had been the producer of Clannad. The three wrote music together and in 1987 Enya released her self-titled debut album. The following year, she released her now iconic album, Watermark, and a star was born. Watermark sold 11 million albums worldwide.

Ever since then, the trio has worked closely together on Enya's albums. In fact, Enya spends almost all of her waking hours with the Ryans working on her music. Her songs are elaborately put together. Originally Enya sang in a mixture of English and Gaelic, but these days she records in Sindarin and Quenya, two languages JRR Tolkien created, and Loxian–a language she and the Ryans invented.

Enya has won four Grammy Awards and was nominated for an Academy Award for her work on The Lord of the Rings soundtrack.

Enya is an anomaly. Music that sounds more classical sung in made-up languages is not usually the stuff chart topping hits and massive fortunes are made of. Nor can an act, other than Enya, sell as well or make as much money without touring and promotion. And yet that is exactly what this reclusive musician has done.

Enya's excuse for not touring seems legit. She claims that it would be nearly impossible to recreate her complicated sound live. However, those close to her suspect she doesn't tour because she doesn't want to disrupt her reclusive lifestyle.

Enya further isolates herself by refusing to listen to any other artists' music, only her own, to keep her work as pure and original as possible. In fact, she claims to never have bought a single album in her life.

There is no one else in the music business who is as successful as Enya and as mysterious. Very little is actually known about her. That hasn't stopped some fans from growing dangerously obsessed with the dark haired Irish singer. Over the years she has had a number of stalkers, such as the one who broke into her castle in 2005 and tied up Enya's maid while the singer locked herself up in her panic room.

However, some feel it was a 1996 incident that drove Enya further into isolation. An Italian man stalked Enya for more than a year and then showed up at the bar her parents own with a picture of Enya around his neck. He was escorted out of the bar and then stabbed himself.

With the castle full of cats, the meticulously composed music, and the stalkers, it isn't hard to see why Enya is single. Music is her first and only love. She has said men find her dark and difficult.

So Enya remains secluded in the multi-million dollar castle she bought in 1997, along with her cats, a handful of household staff, and her $140 million fortune to keep her company.