How One Very Lucky Enron Exec Made $280 Million By Impregnating A Stripper, Destroying His Marriage And Losing His Job

By Brian Warner on February 10, 2022 in Articles › Entertainment

A few months back I went to a strip club for a bachelor party. When I walked in, I had about $100 cash in my wallet. When I walked out, not only was all my cash gone, but the only thing left in my wallet was an ATM receipt for the additional $60 I withdrew while inside the club (with a $5 strip club ATM fee). Why did this happen? Because strippers are absolute Zen masters when it comes to extracting money from men. It's what they were put on this planet to do.

On the other hand, can you imagine a bizarro-world reality where instead of taking money from you, a stripper actually ended up saving you a bunch of money? And not a few hundred dollars, not a few thousand, not a few million, but HUNDREDS of MILLIONS of dollars???

Sounds insane right? Well, believe it or not, this is exactly what happened to former Enron executive (and alleged stripper aficionado) Lou Pai.

Lou Pai might be the only person in history who actually managed to make $280 million by having an affair with a stripper, getting her pregnant and then losing both his marriage and his extremely high paying corporate job.

From Nanjing to Enron

Lou Pai was born in Nanjing, China in 1946 and moved to the United States with his family at the age of two. His father was a math professor at the University of Maryland, Collage Park, where Lou would eventually earn both a B.S. and a M.S. degree in economics. In his college years, Lou was considered a mathematical genius. He joined Enron in 1987 and quickly climbed the ranks. At the time Lou joined Enron, the company was still a mid-sized, regional energy supplier. Within a decade, both Enron and Lou Pai were rising stars. Lou eventually became one of Enron CEO Jeff Skilling's most trusted and highest ranking executives. 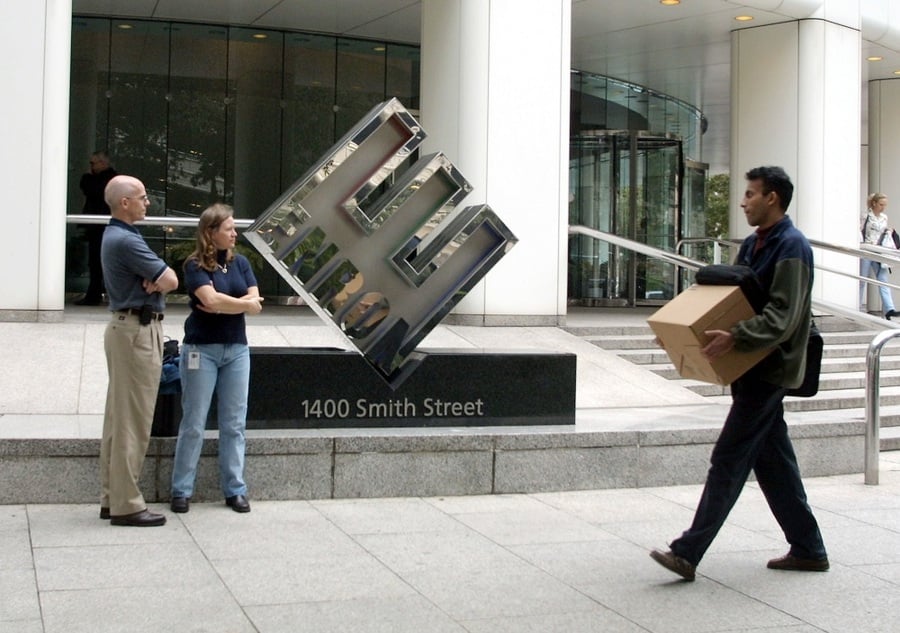 In March of 1997, Lou was named CEO of a subsidiary called Enron Energy Services (EES). The goal of EES was to sell gas and electricity directly to personal homes and businesses a market prices. Think of it like this: Right now the amount you pay for gas or electricity is a fairly fixed rate that is set by a utility company that is probably a pseudo-government entity. EES wanted to create an alternative private sector option that allowed consumers to buy energy on the free market, direct from a utility. EES spent a small fortune on advertisements around the country attempting to sell people on the idea of buying all their energy directly in one place. By consolidating the market and allowing people to buy energy on an open market, EES promised to save its users 5-15% a year on their energy needs.

Unfortunately, the implementation of EES' ambitious goals turned out to be a huge disaster. Between 1997 and 2001, EES blew through $500 million in operating expenses without ever generating any significant revenues. Between all of the various subsidiaries of Enron that Lou Pai ran, his tenure resulted in over $1 billion in losses.

But before shit hit the fan for both EES and Enron, Lou Pai was one of the most important and highest paid people at the company. During his tenure as CEO, Lou earned approximately $100 million in salary alone. He also received enormous grants of valuable Enron stock.

When times were good, Lou Pai also had a reputation for enjoying the Houston-area strip clubs. Actually, Lou Pai's penchant for strip clubs wasn't a reputation, it was a legend. According to Bethany McLean's amazing book on the rise and fall of Enron titled "The Smartest Guys in the Room":

"Only two things seemed to motivate Lou Pai. Money, and a peculiar fascination with strippers."

Lou would reportedly visit a particular Houston strip club (located not far from Enron's world headquarters) every night after work. He would conduct meetings at the strip club and treat the top performing salesman with wild back room parties that were all funded by his Enron corporate expense account. As legend has it, the strippers didn't believe such a mild mannered, almost meek, person was actually a powerful energy CEO. So how did Lou prove his identity? He allegedly would bring the strippers up to lavish Enron offices where they would continue the party late into the night. In order to avoid getting caught by his wife, on his way home Lou would stop by a gas station and splash a little bit of gasoline on himself to get rid of the stripper scent.

As you might imagine, coming home every night smelling like gasoline probably isn't a sustainable lifestyle. And eventually, going to strip clubs turned into a full on affair with a stripper named Melanie Fewell. Oh, and just like Mr. Pai, Melanie also happened to be married with two kids.

It was a mess that got even messier when the affair resulted in a pregnancy. When Lou's wife found out about the pregnancy, she filed for divorce. Not only that, around this same time Enron had just about reached their limit of Lou's strip club expenses and the secret disaster that EES had become. Lou wasn't exactly fired from Enron, but he also wasn't exactly encouraged to stay on as CEO of EES.

At this point, Lou Pai must have felt like he woke up in a nightmare. No more high paying job, his stripper girlfriend was pregnant, his marriage was destroyed and divorce proceedings were underway. Was Karma catching up? Well, considering what happened next, I don't really think you can believe Karma had any impact on Lou Pai. 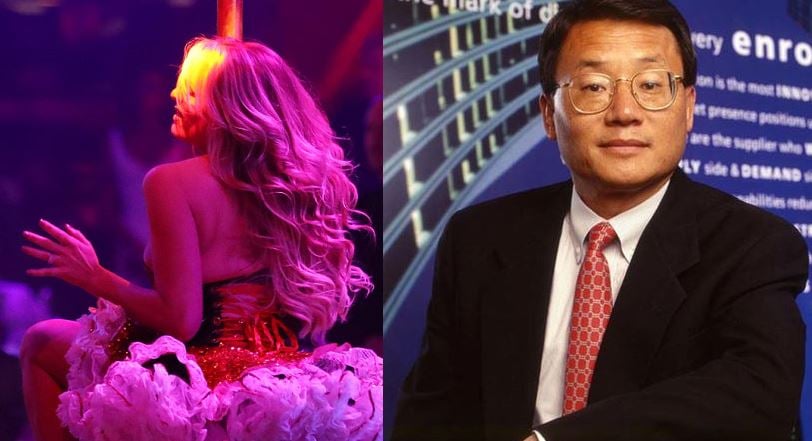 In order to pay the costly financial terms of his divorce settlement, Lou Pai was forced to cash out 100% of his Enron stock. During a three week period between May 18 and June 7 of 2001, Lou sold off every single share he had ever been granted. He also exercised several hundred thousand Enron options. It was probably hard to do because at the time, Enron was absolutely kicking ass as a company and as a stock. Enron's all time highest price was $90.56 a share in August 2000. The average price Lou Pai got for his holdings between May and June of 2001 was $72 a share. The total value Lou Pai was left with after every share was sold? $280 million.

Lou's ex wife Lanna L. Pai, with whom he had two children, was paid an undisclosed lump sum that is believed to be in the tens of millions. She also was granted the right to the couple's Houston mansion, a Houston condo and a $3 million house in Hawaii.

Meanwhile, Lou married his stripper girlfriend, now known as Melanie Miller Pai. Together, with their newborn child, the couple moved to Colorado where Lou became the second largest land holder in the entire state after purchasing a 120 square mile ranch in the Sangre de Cristo mountain range.

Not long after Lou fled to Colorado, Enron slowly started to collapse as investors began to question the company's accounting practices and general business ethics. You know how Lou Pai was able to sell off his entire stake in Enron at an average price of $72 a share? That was June of 2001. Two months later, on August 15, 2001, Enron's share price sunk to $42. Two months later, in October, Enron dropped to $15. At this point, Enron's top executives like Ken Lay and Jeff Skilling were quietly unloading massive amounts of their personal shares while simultaneously telling their own employees and outside investors that this was a GREAT time to buy more stock because Enron was sure to rebound imminently. Ken Lay sold off $90 million worth of stock during this period. 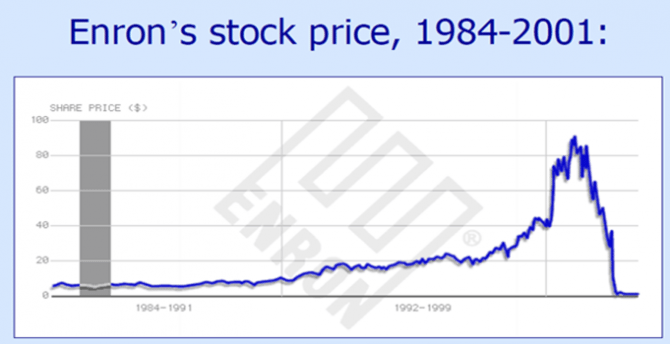 When you put it all together, Lou Pai is one of the luckiest people on the planet. By getting his stripper girlfriend pregnant, he was forced to sell off every single share of Enron he ever owned. He walked away just below the peak of Enron's stock price with an estimated…

His only real consequence came in 2008 when he agreed in an out of court settlement to pay $31.5 million in civil fines and restitution to Enron's investors. He admitted no wrong doing and never spent a moment in handcuffs. As part of the settlement, Lou Pai was barred from serving as an officer of a public company for five years.

He probably thanks God every night for giving him that "peculiar fascination" with strippers!

The only other person who can probably relate is Mikhail Prokhorov, the Russian billionaire and Brooklyn Nets owner who pretty much owes his entire $10 billion dollar fortune to a private jet full of prostitutes. I bet those guys would get along very well.