By The End Of The Decade, Country Star Toby Keith Could Be A Billionaire

To define Toby Keith as simply a country music super star is really not a proper description. He is absolutely a country super star, but today he's also one of the most highly admired entrepreneurs in the world. Over the last decade, Toby has built an extremely lucrative business empire completely separate from singing and performing. His empire includes: 1) A chain of restaurants (15 locations around the country with five more being built). 2) A stable of 200 thoroughbred race horses. 3) A popular liquor brand. 4) A highly lucrative endorsement deal with Ford Motors. And 5) A 10% ownership stake in the record label that is home to artists like Taylor Swift, Rascal Flatts and Tim McGraw. And let's not forget, when Toby does go on the road, he typically grosses around $1 million per night. As crazy as this sounds, Toby Keith is on pace to become a billionaire by the end of this decade. So, how exactly does someone go from aspiring country music street performer to future billionaire?

Toby Keith was born on July 8, 1961 in Clinton, Oklahoma. With the exception of a few years spent in Fort Smith, Arkansas, he grew up in the Oklahoma City suburb of Moore. As a child, Toby would visit his grandmother in Fort Smith during summers and hang out in the restaurant she owned, Billie Garner's Supper Club. It was at this restaurant where the young Toby first fell in love with music. He got his first guitar when he was eight, and soon after started getting up on stage to play with the restaurant's house band.

Toby is a big guy, 6'4″ and 240lbs, so it's not much of a surprise that he played defensive end while a student at Moore High School. After high school, Toby had planned to study petroleum engineering in college, but when the price of crude oil shot above $100 per barrel in the late 1970s, he dropped out of school and went to work in the oil fields as a derrick hand. He eventually worked his way up to an operations manager with a salary of $50,000 a year. When he was 20, he formed a music group called the Easy Money Band with a few friends from the oil fields. If something went wrong at the oil rig, they'd all get paged in the middle of a gig and have to leave mid-show.

The early 80s were hard on the Oklahoma oil business and in 1982 Toby was out of work. So he fell back on what he knew: Football. Toby went to play defensive end with the semi-pro Oklahoma City Drillers. The team was an unofficial farm club for the USFL's Oklahoma Outlaws. Toby tried out for the Outlaws but did not make the cut. While playing football, Toby and his Easy Money Band continued to play gigs for $35 a night. By 1984, they finally began to build a following on the honky tonk circuit in Oklahoma and Texas. 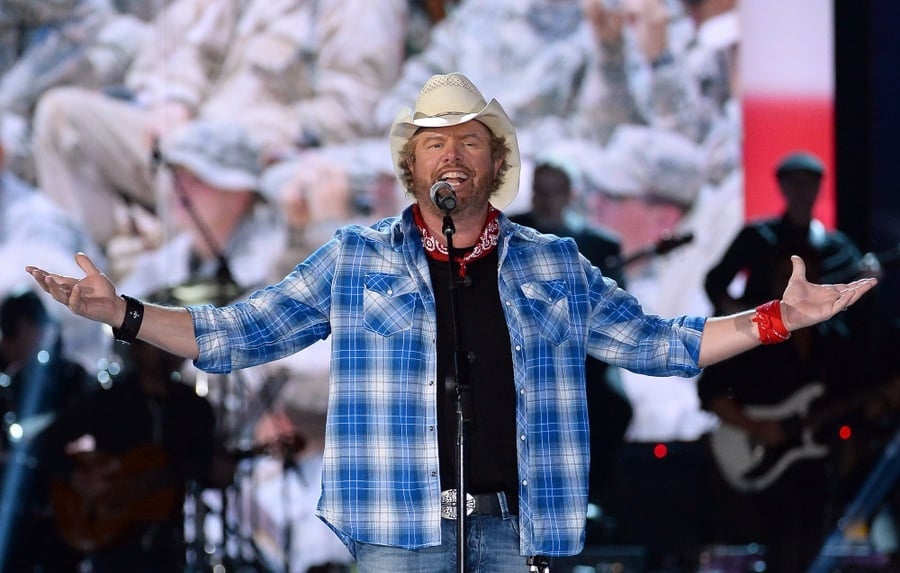 In the early 1990s, Toby moved to Nashville to make it as a solo artist. He vowed to have a recording contract by the time he turned 30 or he would give up the music business forever. While living in Nashville, Toby worked his butt off trying to get discovered. He played any gig he could get at night and spent his days performing in the streets and handing out copies of his demo tape to strangers. After a while, with no interest from record companies, Toby headed back to Oklahoma with his tail between his legs.

On that plane ride home to Oklahoma, something magical happened. One of the flight attendants recognized Toby from his street performing. She told him that she loved his music. Toby gave her a demo tape, but didn't think much more of the encounter. Well, as it turned out, this flight attendant happened to be friends with an high level executive from Mercury Records. After hearing the demo, the record exec immediately flew out to Oklahoma to see Toby perform live. Toby was signed to a contract right after the show. He was 29-years old, a few months shy of that do-or-die goal.

Toby accepted the record deal on the spot. He was paid $20,000 for that first contract and his eponymous first album was released in 1993. There were four No. 1 hits on that album, all of which had been on the demo tape that so many record companies rejected. The album quickly went platinum, and one of hits, "Should Have Been a Cowboy" went on to become the most played country song of the 1990s. Yes, even more played than Billy Ray Cyrus' "Achy Breaky Heart". Legend has it that the last guy to reject Keith's demo tape is now cutting grass for a living.

That first major label album came out when Toby was 32 years old, 12 years after he formed his first band, and he quickly set out to make up for lost time. He performed 150 concerts between March and December of 1993. He made $5,000-$10,000 per night. When the album's second single started getting radio play in the middle of the tour, venues raised his fee to $20,000 per show.

But it wasn't over. That record executive who wanted to scrap the entire "How Do You Like Me Now" album was soon in charge of Mercury Records. In 2004, when Interscope bought out DreamWorks and merged the label with Mercury, Toby found himself face to face with the executive he loathed. Toby refused to work for him, but the label gently reminded Toby that he owed them two more albums. Toby's response? He threatened to retire.

Eventually Toby and the label struck a deal. He agreed to give Universal half of the stake in his next album plus a greatest hits collection to satisfy the two albums owed. After that, he was free to open his own label: Show Dog Records. Apparently, one label wasn't enough.  He decided to share office space and personnel with a new label called Big Machine, which was run by a hungry young executive named Scott Borchetta. Toby purchased a building to be home to both labels in Nashville and bought a 10% stake in Big Machine for $400,000.

That investment may have been a hell of a gamble at the time, but it paid off big time. It actually might go down as one of the most epic deals in music business history. Big Machine went on to sign Tim MGraw, Rascal Flatts, and Taylor Swift. To this day, every time any of Big Machine's artists get paid, so does Toby Keith.

Shortly after founding his record labels, Toby was approached by a Las Vegas casino owner named Don Marrandino with a proposition. Marrandino wanted to put a Toby Keith-themed restaurant inside his casino and call it the "I Love This Bar and Grill".  By the end of 2004, it was one of the top 50 grossing restaurants in the United States. Next, Toby decided to franchise. Today, Toby Keith makes $12 million dollars per year from franchising fees.

For most people this would be enough. But not Toby Keith. After hearing that his friend Sammy Hagar sold his Cabo Wabo tequila company for $80 million in 2007, Toby decided it was time to get into the booze business. He considered starting a Bourbon or vodka brand. Bourbon turned out to be difficult to produce at scale and the vodka market seemed extremely saturated. So, he settled on Mezcal. Toby found a distributor and began sampling the various family-run mezcal distilleries. "Wild Shot" mezcal was launched in March 2011. By the end of the year Wild Shot was the number one premium mezcal in the United States.

The liquor arm of Toby's empire was the final part of a growing empire. An empire that earns him an estimated $60 – $100 million per year. As of this writing, Toby Keith's personal net worth is $360 million. But that number is growing FAST. If his empire continues expanding at its current pace, experts believe that Toby will be a billionaire by the end of the decade. RESPECT.