By Joey Held on October 21, 2013 in Articles › Entertainment

He's the best selling artist of the 2000s. Ten of his albums have reached the #1 spot of the Billboard Top 200. Rolling Stone named him "The King of Hip Hop." He's got 77 million Facebook fans and 15 million Twitter followers. The video for his song "Love The Way You Lie (featuring Rihanna) is the fourth most viewed video in the history of Youtube (607 million views). He's won an Academy Award, ten American Music Awards, nine Billboard awards and 13 Grammys. As of October 21, 2013 he has sold over 100 million albums worldwide and he's got a new album coming out on November 5th. Of course we are talking about the one and only Eminem. It's been 14 years since he first took the world by storm, and today Eminem is still managing to keep listeners on edge. But it hasn't always been a smooth ride, and his career/life certainly didn't start off easy. This is the story of how Eminem, AKA Slim Shady, AKA Marshall Mathers, pulled himself out of the trailer park and ended up on top of the entertainment industry with hundreds of millions of dollars in the bank and a legacy that could end up rivaling greats like Michael Jackson, Elvis and The Beatles. 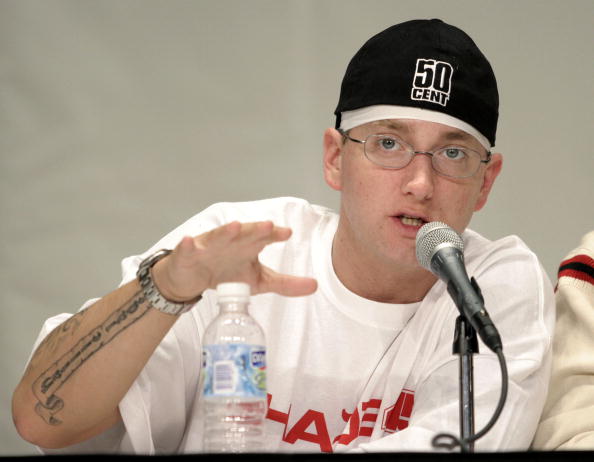 Marshall Mathers was born in St. Joseph, Missouri on October 17, 1972 to a teenage mother and a deadbeat father. His parents split when he was a child and he would never know his father. In the early days, his mother ferried Marshall back and forth between Missouri and Michigan until the two finally settled in Warren, Michigan. Marshall wrote endless letters to his father, but they all came back "Return to Sender". He and his mother Debbie fought often. She even kicked him out of the house on a number of occasions. When Marshal was 15, Debbie allowed a young girl named Kim Scott to stay with the family. Marshall and Kim soon began dating, and the latter would become the subject of some of Eminem's most vicious songs.

As a member of one of just three white families on the block, Marshall was beat up frequently. To escape, he found solace in storytelling and reading comic books. Marshall's life would change forever after his Uncle Ronnie bought him the Breakin' soundtrack and he heard "Reckless" by Ice-T. It was the first time he heard rap, and he was hooked for life.

Mathers dropped out of high school after repeating ninth grade twice, and between working several jobs to help pay the bills he'd blast the stereo and write lyrics. Mathers' goal was to be the best at rhyming in the world. He listed words and phrases on a page and would rhyme each syllable underneath. While these lyrics usually didn't make sense, they helped Mathers practice constructing lyrics.

Mathers first started rapping at age 14, when he and friend Mike Ruby adopted the nicknames Manix and M&M. Mathers also befriended fellow rapper named Proof, and the two honed their craft by sneaking into high schools and doing lunchroom freestyle battles. They would later perform together at the Hip-Hop Shop on West 7 Mile in Detroit. Mathers initially had trouble being accepted into the predominantly black hip hop community, but thanks to his tireless work ethic, he was soon recruited to join several different rap groups.

Around this same time, the newly Christened "Eminem" recorded and released his debut album Infinite. While it didn't find much success in the charts, it planted the seeds of what would become The Slim Shady EP. In March 1998, rap magazine The Source listed Eminem in their column about hot unsigned artists. This earned him an invitation to attend the 1998 Rap Olympics in Los Angeles, where he finished second. It turns out, an employee of Interscope Records was in the audience at the Rap Olympics and after seeing Eminem's performance sent a copy of his demo to Interescope President Jimmy Iovine. Jimmy Iovine loved the demo and immediately played it for Dr. Dre. Dr. Dre's response was simple: "Find him. NOW."

As you probably know by now, Dr. Dre and Jimmy Iovine were successful in tracking Eminem down and signing him to Aftermath records. Eminem temporarily bolted D12 and moved to Los Angeles to begin work his debut album The Slim Shady LP. The Slim Shady LP was released in February 1999 to instant acclaim. The album, thanks largely to the lead single "My Name Is" would go on to sell 15 million albums worldwide. 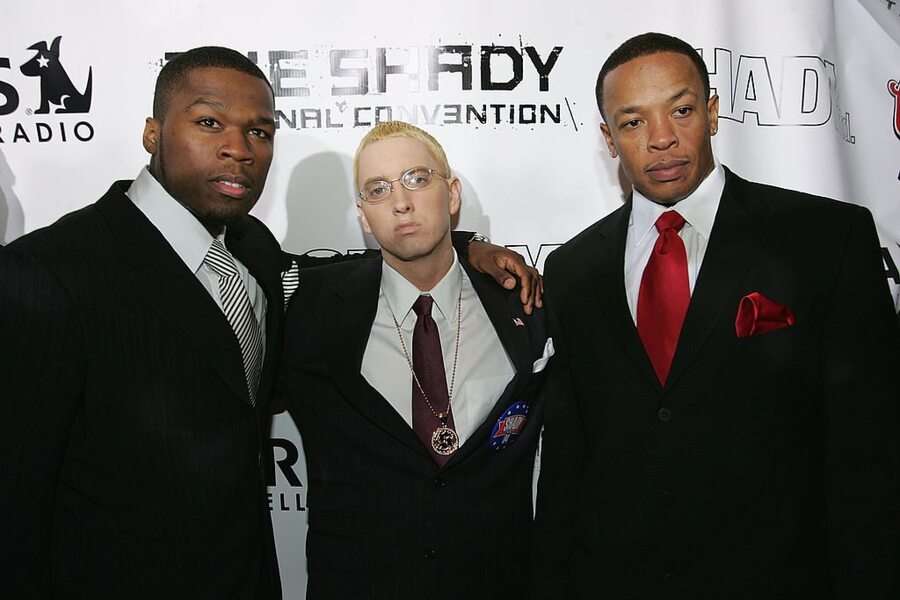 Despite massive success musically, not everything was rosy for Eminem. Just as his career was taking off, he was slapped with a lawsuit from his wife Kim–she later dropped charges, but the couple divorced in 2001. Em also pleaded guilty to a concealed weapons charge, and received two years probation.

In 2002, Marshall released his third album, The Eminem Show. It featured personal karaoke favorite "Without Me" and "Cleanin' Out My Closet," both of which peaked in the Top 5 of the Billboard charts. This album go on to sell 22 million copies worldwide.

After three highly successful albums, Eminem next took to the silver screen, starring in 2003's semi-autobiographical movie, "8 Mile". Not only was Mathers praised for his acting, he also scored his first #1 hit with the soundtrack's anthem "Lose Yourself." The track also earned an Academy Award for Best Original Song. In 2004, Encore was released, and though the lyrics were noticeably more restrained than his previous albums, the crossover appeal and snide verses were still there. The song "Just Lose It" poked fun at Michael Jackson, and angered a number of friends of the late singer. Stevie Wonder called it "kicking a man while he's down" and Steve Harvey said Eminem had "lost his ghetto pass". Meanwhile, "Mosh" had a very anti-Bush message, which irritated Republican supporters. But then again, generating controversy and getting people talking was hardly something new for Eminem. Encore would go on to sell 11 million copies worldwide. 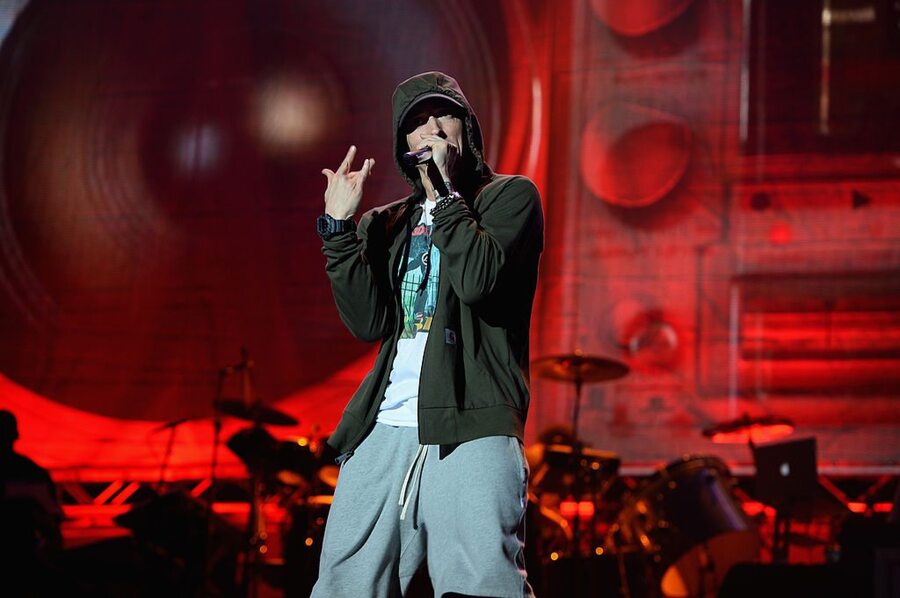 Unfortunately, seemingly endless controversy started taking its toll on Eminem. In 2005 he released a greatest hits album called Curtain Call: The Hits. Speculation started building that he'd be retiring. Eminem denied these rumors but he did say that he wasn't sure where his career was going and that he needed a break. Mathers cancelled the European leg of the Anger Management 3 tour and checked into a rehab facility in August 2005 after becoming dependent on sleeping pills. The darkest event of this time period occurred when Eminem's childhood friend Proof was shot and killed in 2006.

Eminem only intermittently gave interviews during the time off, saying he wasn't sure if or when he'd release another album, but that he was constantly working on ideas. Those ideas came to light in 2009, when he released the album "Relapse". While it received more mixed reviews than his previous efforts, it's still sold over 5 million copies, his lowest major album performance of all time. Eminem himself wasn't pleased with the final product, commenting that the accents he used on Relapse were "ran into the ground". He also admitted that during recording he wasn't "paying attention to what the average listener might like or not like."

Any dissatisfaction was short-lived, though, as Eminem got right back to work, dropping "Recovery" in June 2010. Backed by mega hits "Not Afraid" and the Rihanna duet "Love the Way You Lie," Recovery broke the record for most digital copies ever sold, though that was later surpassed by Adele's "21". While recording the follow-up to Relapse, Eminem listened to his earlier albums and wondered why his music didn't sound like that anymore. Some original ideas were scrapped and Recovery saw Eminem going back to his unfiltered, raw sound, complemented by his wit and more mature, thoughtful lyrics. This showed he'd keep improving and progressing to be the best at his craft, while still utilizing what made him successful in the first place. Recovery would go on to sell 10 million copies which is impressive considering how few people actually buy music anymore!

Other Ventures and Future Projects

Through his Shady Records label, Eminem helped launch the careers of some some big names in the industry, most notably 50 Cent. 14 of the 21 releases on Shady Records have earned at least platinum status.

On November 5th 2013 Eminem is releasing his much-anticipated seventh studio album "The Marshall Mathers LP 2". The tracks that have leaked so far have been extremely well received by both fans and critics. Some people are even saying this might be Eminem's best album ever. Pretty impressive considering he just turned 41 years old on October 17. Today Eminem's net worth stands at $140 million, but considering he may be just hitting his creative stride now, that number is likely to skyrocket over the next few years. Regardless of where Eminem chooses to take his career next, we'll be watching. Or I guess we should say listening.