By Paula Wilson on September 16, 2016 in Articles › Entertainment

40 years ago today, Elvis Presley died at the age of 42. An immensely popular musician and actor, Elvis Presley redefined rock and roll in the late 50s and 60s. He was a larger-than-life celebrity and his compound in Memphis, Tennessee, known as "Graceland," was a physical representation of his super-stardom. His fan base was rabid, loyal, and rumors still swirl that his death was just a hoax. Though his performances and tracks set multiple music-related records, won numerous high profile music honors, and prompted Catholic nuns to write the FBI about how dangerous he was to America's youth, he passed away with a surprisingly small fortune. How did the best-selling solo artist in the history of recorded music lose his massive fortune? The reasons are wide ranging, and serve as an interesting cautionary tale for all current day celebrities.

Elvis Aron Presley was born on January 8, 1935 in Tupelo, Mississippi. Presley grew up quite poor, and his family often relied on the kindness of neighbors with regards to food and other necessities. He was given a guitar for his 11th birthday, but didn't become particularly interested in playing and singing until his early teens. Largely ostracized for his poor appearance, manners, and the fact that he lived in a primarily African-American neighborhood, he would bring his guitar to school in order to entertain himself during lunchtime. After his family moved to Memphis, he began to play music with a group of fellow teenagers at his school, while also hanging around Beale Street, Memphis' famed blues area. By his senior year of high school, he had adopted the clothing and hairstyles popularized by many of the blues musicians down on Beale Street. Most of his classmates had no idea that he was an aspiring musician.

Ironically, the only class he received poor grades in was music. When he performed at a local talent show, he blew everyone away. Overnight, he went from the hillbilly kid with the funny clothes, to the kid everyone wanted to know. Presley decided to screw his courage to the sticking place, and went to Sun Records to record a couple of tracks professionally. He said they were for his mother, but Sun Records executives were known for scoping out new talent from musicians who paid for studio time. Sam Phillips, the head of Sun Records, called him back to the studio to record. He had a plan for the young man. Phillips was looking for a crossover star who sounded black, but was actually white. After Phillips struggled to find the right song for the young performer, Presley actually hit on the right track himself, a cover of Arthur Crudup's blues track, "That's All Right." It was an instant hit, with audiences clamoring to find out who sang it. In order to prove that he was white, Phillips had Presley deliberately mention which high school he attended in various radio interviews. As schools were segregated, it was abundantly clear what his race was from his mention of his school's name. Phillips had his crossover star and Presley had a burgeoning career. 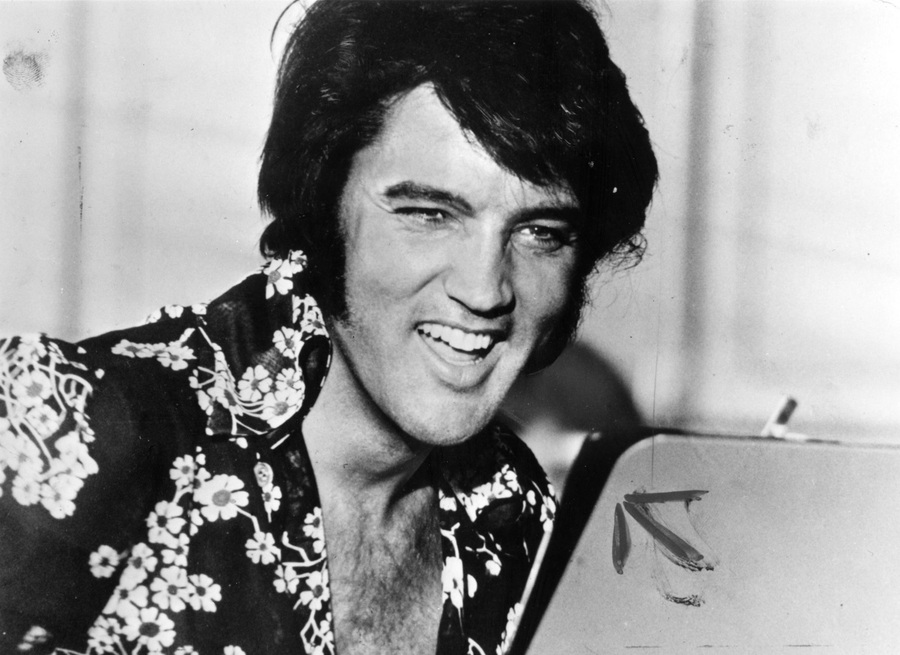 Over the course of the next six years, Presley went from regional star to breakout sensation. He went from performing at local pubs, to multiple appearances on national television. His debut album climbed to #1 on the Billboard charts, becoming the first rock and roll album to hold that position. It stayed there for 10 weeks. He began touring constantly, a practice he continued almost up until his death. He nearly started a riot in Wisconsin and the local Catholic diocese reported him to the FBI as a threat to national security. His performance of "Hound Dog" on The Milton Berle Show polarized audiences. Critics hated it, with most saying that he couldn't sing and that his vulgar pelvic thrusts didn't deserve to be on national television. Audiences, however, ate it up.

Due to public demand, he began performing on other national television shows. Ed Sullivan made it clear that he wanted nothing to do with Presley. However, as Presley's fame increased, and viewership of his on-air performances kept setting records, Sullivan relented. On September 9, 1956, Presley appeared on the Ed Sullivan Show. He was paid $50,000 to appear three times. Nearly 83% of people who owned televisions in the United States tuned in for the show. No program had ever drawn viewership like that. As he began touring more widely, his concerts regularly became riots. The National Guard was brought in at each stop to keep the crowd from destroying everything. He second album went straight to #1 and his album sales accounted for 50% of his record label's singles sales for the year.

He then began appearing in films, some of which were retooled to allow him to sing. In 1958, he was drafted, and he spent the next two years in the military. RCA, his record label, continued to release previously recorded tracks while he was gone, and by the time he was honorably discharged, he was an even bigger star. He had also begun using amphetamines. This would later come back to haunt him. Throughout the early 60s almost all of his work was tied to films. He appeared in picture after picture, often providing the soundtrack, as well. Unfortunately, the canned sound of his work left audiences cold, and despite winning a Grammy for Best Sacred Performance for one of his gospel tracks, his star began to dwindle noticeably.

In 1968, after two albums tanked, he staged a major comeback. His live televised performance from a studio in Burbank, California is still considered one of the best live performances recorded ever. The success of the special led to a new era of recording, and for the next five years, Presley toured incessantly, released hit single after hit single, and commanded as much as $1 million a performance. By 1973, however, it was clear all of the touring, and his hard-partying lifestyle, were taking their toll. He became increasingly erratic at performances, often barely able to get through songs or to even start singing at all. He was taking immense amounts of drugs and was found unconscious multiple times by family members and bandmates. He passed away in 1977 due to a heart attack that was likely caused by his rampant drug use.

Elvis' Net Worth When He Died

Over the course of his career, he sold 600 million units worldwide. He commanded as much as $1 million per performance. 21 of his albums reached #1 and 35 of his singles reached #1. He was RCA's cash cow for almost two decades. When he passed away, he had only $5 million. While $5 million is certainly not broke by any stretch of the imagination, it is far, far, far less than he reportedly earned. So where did all the money go?

In Presley's case, it went to four places – real estate, drugs, hangers on, and his divorce. His home, Graceland, a 23-room mansion in Memphis, was purchased for $102,500 in 1957. Over the course of the next few years, Presley would buy $500,000 worth of surrounding land and household goods for himself. By the late 60s, he'd developed a major drug habit. In 1977, one of his two primary doctors, prescribed 10,000 doses of amphetamines, sedatives, and narcotics within a seven-month period. It's unknown just how much he was spending on drugs, but those close to him noted that he was drugged to the point of barely functioning most of the time. However, his biggest expenditures were on family members and the group known as the "Memphis Mafia." After his mother passed away, Presley's father remarried. Presley and his new stepmother did not get along, so he moved his father, his stepmother, and her children into a home near Graceland. His father updated the home with things like a swimming pool in the bedroom. Other family members floated in and out of Presley's life looking for a handout. Distant cousins would reportedly show up on his doorstep looking for a piece of the action.

When Presley traveled, his entourage, the group of family members and friends from high school known as the "Memphis Mafia," always traveled with him. They partied wherever they went, rented women by the hour, and always rode in style. Presley footed the bill for everything. Disturbed by public attention and increasingly paranoid about death threats from morality groups, Presley would do things like rent out the entire amusement park, Libertyland, so that he could ride his favorite roller coaster. He liked to invite massive games to play with his group of friends, the more dangerous the better. One game, called "Whip," involved firecrackers and Air Force jump suits. The "Memphis Mafia" would regularly purchase $15,000 in firecrackers in order for everyone to play. His hotel rooms in each city were remodeled to look like the inside of Graceland so he wouldn't feel homesick or disturbed while on the road. He spent lavishly on things for himself, as well, including three pink Cadillacs.

His divorce from his first wife, Priscilla Presley, cost him dearly, both financially and emotionally. Priscilla Presley was originally going to take a token amount in the divorce, but her lawyers persuaded her to increase her requests. The divorce settlement included $725,000 outright, spousal support, child support, 5% of Elvis' publishing companies, and 50% of the money from the sale of their second home in Beverly Hills.

As Presley became more and more ill and unable to care for himself, other people began dispersing his funds on his behalf, or simply taking things when they wanted them. The final year of his life, he spent with a woman named Ginger Alden. After his death, she contacted the National Enquirer to give them the scoop, asking for over $100,000 for her story. His cousin, Billy Mann, was paid $18,000 to secretly photograph his body in the casket at his funeral. The National Enquirer used the photo on the cover. It became the best-selling issue of the National Enquirer ever.

While Presley was not so smart with how he used his money while living, he did one smart thing in his will. He left what remained of his fortune to his father, grandmother, and his then 9-year-old daughter, Lisa Marie Presley. His father and grandmother subsequently passed away, which left Priscilla Presley, Lisa Marie's mother and his ex-wife, in charge of the estate. The two had remained friends after the divorce and Presley had been supportive of his ex-wife's goals. A savvy woman who had built a successful clothing and design business post-divorce, Priscilla Presley parlayed Elvis' stardom into a lucrative business franchise of its own. Upkeep of Graceland, and taxes on the land, had reduced the original $5 million left in Elvis' will to just over $1 million. After looking at various business models, she opened Graceland as a tourist attraction and museum.

By the end of the first month of Graceland's new role as a tourist destination, she'd made back her initial investment. She launched Elvis Presley Enterprises, and passed it on to Lisa Marie when she reached age 25 in 1993. During Priscilla Presley's years as chairwoman of Elvis Presley Enterprises, she increased the value of Presley's estate from $1 million to over $100 million. In 2006, Graceland became a National Historic Landmark, and is now the second most-visited house in the United States (behind the White House). Presley's music formed the soundtrack for a Cirque du Soleil show called, "Viva Vegas," which was in residence in Las Vegas, a city where he was famously nearly boo'd off the stage early in his career. New albums of unreleased material, as well as reworkings of Presley classics still climb the charts whenever they are released. Elvis Presley is now the second most lucrative deceased artist in the world. One can only hope that the man who grew up begging for food from his neighbors is somewhere feeling proud of the fact that he managed to form the foundation of a very successful empire.