How Elizabeth Holmes Crashed And Burned

It seemed like such an amazing, revolutionary idea. One nearly undetectable pin-prick to your finger and 10 minutes later, you know if you are anemic, have high cholesterol, or have a low thyroid function. This was the idea behind Elizabeth Holmes' blood testing company, Theranos. The medical community got excited about it. Venture capitalists got very excited about it. The biotech industry got excited about it. The Theranos method was the first major innovation in blood testing in decades. Not that long ago, Theranos was valued at $9 billion and Elizabeth Holmes was the youngest self-made female billionaire in history, with a net worth topping $4 billion. And then it all came crashing down.

On October 14, 2015 a scathing report in The Wall Street Journal alleged that Holmes and Theranos were basically a sham. The article claimed that the much celebrated blood testing technology didn't work, and that most of the tests Theranos did were by traditional methods of blood testing. John Carreyrou, the author of the WSJ piece, had read an article on Holmes in The New Yorker and was intrigued by Holmes' famous secrecy. The level of secrecy Holmes enforced is to be expected at a tech startup, not at a medical startup. He also noted how Holmes could not actually explain the nuts and bolts of how her blood testing method worked. So, after he read the article, he began digging. Not long after, Holmes, who had famously dropped out of Stanford at 19 to found the company, was thrust into the spotlight for all the wrong reasons. 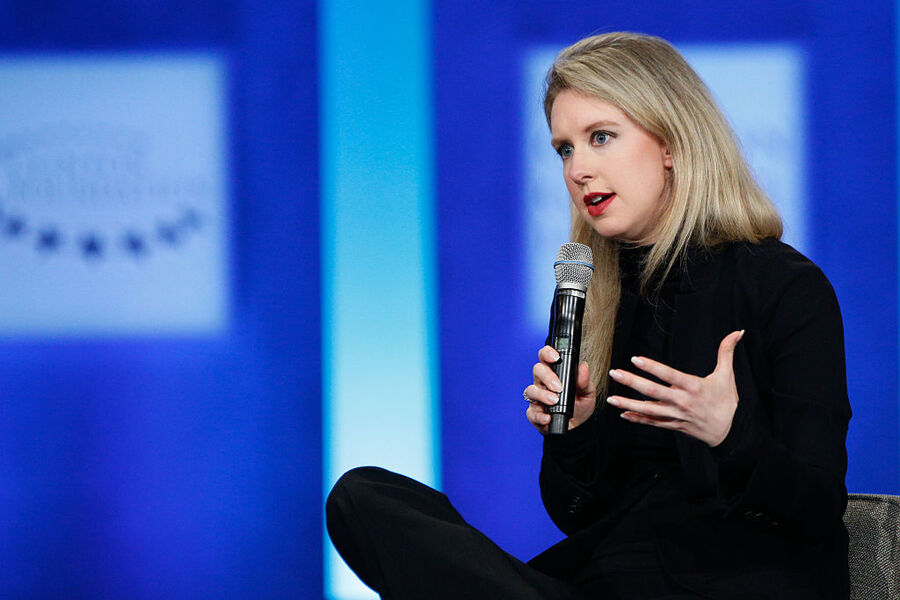 As you can imagine, when the article came out, employees at Theranos were shocked and curious. For two days, Holmes refused to face her employees' concerns. She stayed sequestered in a conference room with her closest advisors. She was secretive and she demanded secrecy not just in the company overall, but also from department to department. Holmes forbade her employees from talking about what they were working on with each other. This made her an omniscient force within the company. She was the founder, the CEO, the chairwoman. No decision was made at Theranos without first crossing her desk.

Holmes had always been enamored of her own story. How she discovered this idea, dropped out of Stanford to pursue it, was going to change the world, etc. After the damaging WSJ piece, she doubled down on that story in both interviews and with her employees.

These "stories" are not rare in Silicon Valley. Every company has a slightly embellished fable about how they came to be designed to win over investors, the press, and customers. And as Silicon Valley stories go, Elizabeth Holmes had a good one. She was a woman. She was a teenager. She was building a company that really could change the world. What she always conveniently left out of the story of how she could diagnose thousands of disorders with a single drop of blood is how one Stanford professor told her it wasn't going to work.

Phyllis Gardner, a professor of medicine at Stanford, told Holmes that precise results from the tip of a finger could not produce accurate results. But Holmes was determined to prove her wrong and went out and raised $6 million in funding. That was just the first of what would be nearly $700 million raised by Theranos.

Holmes took the money from investors on the condition that she would not divulge how her technology actually worked. She also demanded final say and control over every aspect of her company. This scared off some investors.

Google Ventures focuses around 40% of their investments in medical technology. They were intrigued by Holmes and Theranos. However, when they tried to perform due diligence on Theranos, the company never responded. So, they sent one of their venture capitalists to a Theranos clinic at Walgreens to take the amazing new pinprick blood test. Imagine their surprise when instead, several large vials of blood were drawn.

Google wasn't the only one scared off. The Department of Defense, the FDA, and countless potential investors realized that something was shady about the science behind Holmes' company. It became clear that Theranos was far more of an idea than a reality.

Ian Gibbons, Theranos' chief scientist, was deeply troubled by the science behind the company (or, rather, the lack of it). He told Holmes they were not ready to go public with it. In fact, he told his wife Rochelle that nothing about Theranos's technology worked. After a troubling meeting with Holmes, Gibbons committed suicide in 2013. A few hours after his wife called Holmes' secretary to let her know about his death, she received a call demanding she immediately return any and all confidential Theranos property.

Holmes appeared to be shocked by the story in The Wall Street Journal and the negative attention focused on her. She shouldn't have been. It wasn't the first time it happened. In August 2015, months before the WSJ story came out, investigators from the Food and Drug Administration arrived unannounced at Theranos' Palo Alto headquarters, as well as at its lab in Newark, California. They demanded to be able to inspect and test the facilities.

Right around that same time, regulators from the Centers for Medicare and Medicaid Services, which regulate laboratories, visited the labs and found major inaccuracies in the testing being done on patients. CMS found that some of Theranos' tests were so incredibly inaccurate, that they not just put patients at risk, as we previously reported, but put people prone to blood clots at grave risk of internal bleeding and strokes.

While the storm had been gathering for months, the WSJ article made a direct hit on Theranos. It set off a slew of negative articles about Holmes and Theranos. Walgreens ended their relationship with Theranos and closed all of the Wellness Centers. The FDA banned Theranos from testing via its pinprick method; the Centers for Medicare and Medicaid Services banned Holmes from owning or running a medical laboratory for two years.

The trouble kept mounting. Now, there are civil and criminal investigations by the U.S. Securities and Exchange Commission and the U.S. Attorney's Office for the Northern District of California. There are two class action fraud lawsuits.

Funding for Theranos has dried up. Holmes' net worth, once $4.5 billion, has been downgraded to $0.

Holmes fatal flaw, it seems, was her secrecy, which clearly masked her lack of understanding of her own product – one she invented. If you're building a smartphone app and you take it to market before it is ready, all you're going to get is a few frustrated users. When you take something medical to market before it is ready, as Holmes and her ego did, you are risking lives.