More so than any other sport, the NBA is a star-driven league. Even if a team wins a lot of games, fans won't fill the seats and merchandise won't fly off the shelves without a star player. The NBA lives and dies by its star players, and to attract a star player you have to pony up the cash. During David Stern's 30 years at the helm of the National Basketball Association, he has branded and marketed some of the game's most legendary players – Magic Johnson, Michael Jordan, Larry Bird, Shaquille O'Neal, Kobe Bryant, LeBron James and many more. Adam Stern took over the helm of the NBA in 2014 and has continued the trend. Turning athletes into massive international celebrities has been extremely beneficial for both the player's and the league's bank accounts. When a whole team becomes a celebrity, like the Showtime era Los Angeles Lakers, the money that it brings into the NBA is simply staggering.

Over the past 35 years, the NBA's revenues and franchise values have grown by 40% and the NBA's top player salaries have gone from $1 million to nearly $40 million. When you add in endorsements, the total combined annual paycheck for the league's highest paid players swells to nearly $90 million.  This year, 11 NBA players made the list of the top 100 highest paid celebrities. They came in from #17 – LeBron James of course to #94 – Paul George. But don't feel sorry for George, his #94th spot was good for a $38.6 million haul this past year. 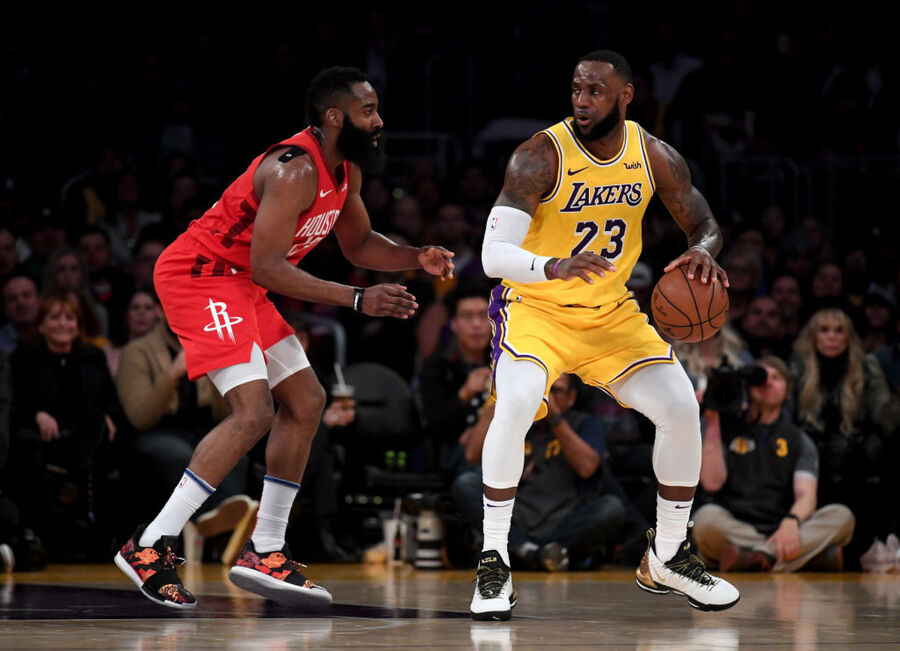 Paul George is the 11th highest-paid NBA player and 94th on the Celebrity 100. He forced a trade to the Los Angeles Clippers to join Kawhi Leonard. In 2018, he signed a four-year $137 million contract extension with the Oklahoma City Thunder.

Blake Griffin comes in at #91 on the Celebrity 100. He is in the middle of a five-year, $171 million contract he signed in 2017 with the Detroit Pistons that is fully guaranteed and runs through the 2021-22 season.

The 82nd highest-paid celebrity plays for the Portland Trailblazers. He is currently signed to a five year, $140 million contract. He is expected to get a super-max extension worth $191 million.

The Greek Freak is #75 on the Celebrity 100. He signed a four year, $100 million contract extension with the Milwaukee Bucks that is good through the 2020-21 season.

The 74th highest-paid celebrity of the year is the Brooklyn Nets' Kyrie Irving. He was integral in bringing home Cleveland's first championship in 2016. He signed a four-year, $141 million deal with the Nets this summer.

The 72nd highest-paid celebrity of the year was traded from LA to the Houston Rockets in 2017. In 2018 he singed a four-year, $160 million contract extension, making him the third highest-paid player in the NBA.

The Houston Rockets' James Harden is #64 on the Celebrity 100 this year. In 2017, Harden signed a four-year extension worth $171 million. It runs through the 2022-23 season and pays $47 million in its final year. Remember, his $47.7 million income includes his lucrative Adidas and Amazon deals.

Oklahoma City's Russell Westbrook is #52 on the Celebrity 100. He signed a five-year extension with the Thunder in 2017 worth $205 million – the league's biggest-ever contract in terms of total value.

The 64th highest-paid celebrity this year had three undervalued contracts in a row with the Golden State Warriors. He finally left the Bay Area to sign a four-year deal with the Brooklyn Nets, worth up to $164 million.

Steph Curry grabbed the 23rd spot on this year's celebrity 100. He signed the first $200 million contract in the NBA in 2017. Curry has been the highest-paid player in the NBA the past two seasons.

LeBron James joined the Los Angeles Lakers in 2018 with a four year, $153 million contract. He has the top endorsement portfolio in the NBA, which augments his income nicely, and landed him at the 17th spot on the list of the 100 top-paid celebrities of the year.