By Joey Held on January 23, 2015 in Articles › Entertainment

Very few people would call Cincinnati Bengals quarterback Andy Dalton's most recent season, "good". "Peculiar" is probably a more appropriate word. He finished with 3,398 yards, 19 touchdowns and 17 interceptions. In seven of 17 games, including the playoffs, he threw for fewer than 200 yards. He had a passer rating of 2.0 at home against the Browns, then went into New Orleans the following week and put up a 143.9 passer rating–since the scale goes from zero to 158.3, that's just about as wide a range as you can get. He had a completion percentage of 58.3% or fewer three times, but was above 72% on four occasions. Even his team was all over the map: the Bengals got shut out by the Colts, shut out the Browns the second time they played them, and had the only tie in the NFL this year. In short, he had one of the more hot and cold seasons in recent history.

And, as luck would have it, it was enough to get him to the Pro Bowl.

The best response to that statement is probably "How?!" So, let's take a look at Dalton's path to the Pro Bowl, the second of his career. 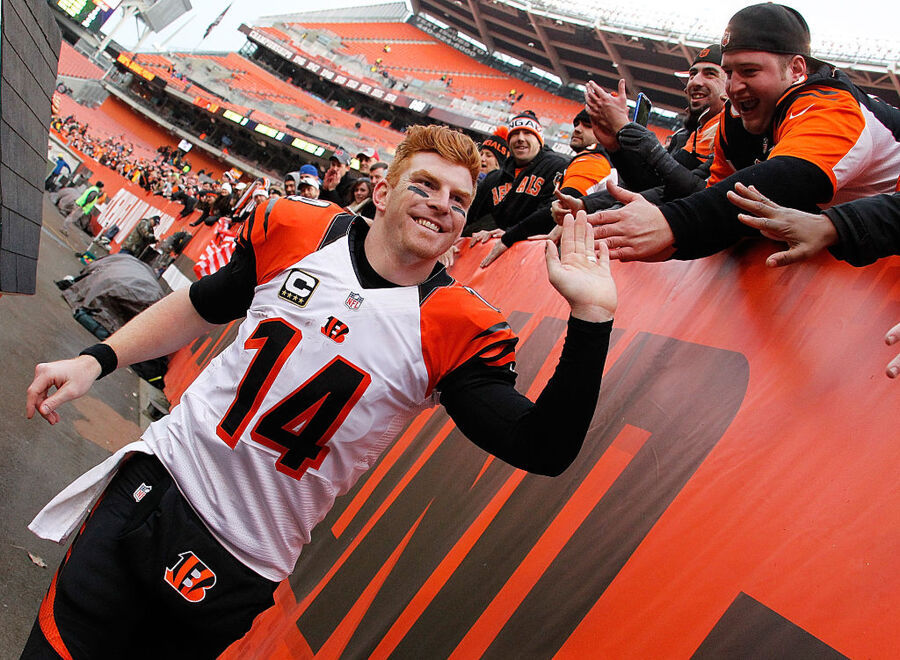 Of those six, only Luck and Romo are still scheduled to play. Manning, who hurt his thigh toward the end of the season, has bowed out of his record-tying 14th Pro Bowl selection to heal. Roethlisberger, who may have suffered a concussion in Pittsburgh's playoff loss to Baltimore (among other injuries), also chose to sit the game out.

The league invited first alternate Drew Brees to replace Roethlisberger. As for Manning's replacement, second alternate Philip Rivers said no, since he's recovering from a back injury of his own. The third alternate is Russell Wilson, who has a far more important game to play the following Sunday. Matthew Stafford, being the good sport he is, took over for Manning as the fourth alternate.

Of course, you may have noted Tom Brady's name on the list of original starters. Like Wilson, he'll be playing in the Super Bowl, so he needed a replacement, too. Enter alternate #5, Matt Ryan.

Finally, Aaron Rodgers decided to forego the Pro Bowl, as well, to allow his partially-torn calf muscle to heal. The league turned to Joe Flacco, who said "this isn't the playoffs? I'm not interested."

Nah, actually, Flacco and his wife are expecting their third child this month. Flacco missed the birth of his second son, Daniel, because of a regular season game in 2013. He wasn't going to let that happen again this year, particularly for a contest that doesn't count in the standings.

As a result, 13th choice Andy Dalton is now on the Pro Bowl roster. He'll join Luck and Brees on Sunday, playing for Team Carter. The squad was chosen by Hall of Fame wide receiver Cris Carter.

"I was excited," Dalton told bengals.com. "It's cool to be going." Goes to show what you can achieve if you just follow your dreams–and have a lot of people in front of you get hurt.