By Daniel Lipson on June 27, 2016 in Articles › Entertainment

What began as a two-man push cart has grown into a seven-state, $150 million coffee empire, thanks to Travis Boersma and his brother, Dane.

Dutch Bros. Coffee was formed in 1992 by the two brothers who went into business as their family's dairy farm was breaking up. They started with a $12,000 pushcart and espresso machine outside their local post office in Grants Pass and found success with a drive-through model that puts culture and employees at the forefront.

Dane passed away from sclerosis in 2009, but Dutch Bros. continued to grow. It now has over 264 drive-thrus. It doesn't sell franchises to outsiders, and instead awards them to employees who work their way up through the company and impress Boersma. 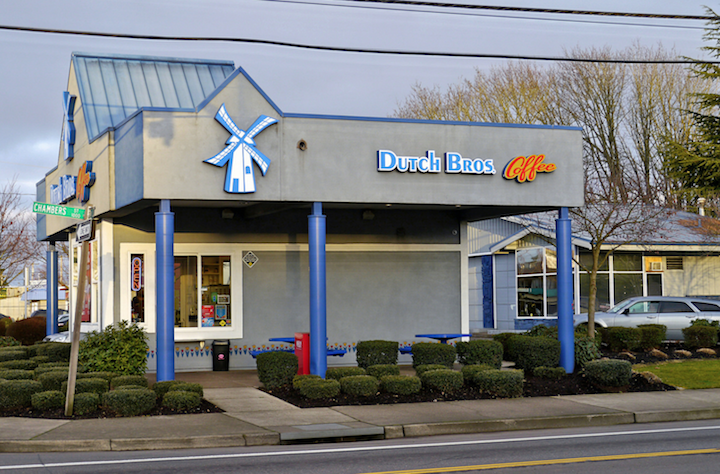 The brand only hires and promotes outgoing, optimistic people who are committed to their customers. Boersma will only sell franchises to people who have worked with them for a minimum of three years and will buy up any who fail to live up to his standards. To speed expansion, the company will offer extremely generous terms to loyal employees, and takes care of site development.

Dutch Bros. logged $283 in systemwide sales last year. It was rated high for store profitability and return on investment. It holds a 97% five-year continuity rate, meaning only 3% of units closed between 2010 and 2015.

Each new franchise is equipped with new equipment that can total at around $150,000, and they must pay between $30,000 and $60,000 for opening day expenses including a celebration party and onsite trainers, also known as Dutch Mobsters.

For employees like Tersch,  it's all about making connections with people. Baristas, known as "bro-istas" memorize patron preferences and ask about their families. They will even offer support and free drinks to customers who are going through rough times.

Boersma blends in seamlessly with the young franchisees, and is often clad in casual beachwear and Dutch Bros. memorabilia. Despite his great success, he pays himself a salary comparable to that of his franchisees, at $350,000. He has no office, and instead hangs out in a hangar-like common area of the company headquarters.