Back in 1978, Universal Pictures released a low budget comedy called "Animal House" that they believed had no hope of being a financial success. Animal House was a raunchy gross out movie that starred a bunch of completely unknown actors and one SNL comedian. Initially, the producers hoped to land some serious star power by offering the lead roles to Chevy Chase, Bill Murray, Dan Aykroyd and John Belushi. Everyone except Belushi turned them down. Fun fact: Had Belushi turned them down, the role of Bluto would have gone to Meat Loaf. All the other main parts eventually went to first time actors most of whom had never set foot on a film set before. That includes a 20 year old baby-faced Kevin Bacon, whose very first paid acting role was as the douchey rival frat boy Chip Diller in Animal House.

Unfortunately, the studio was still worried that Belushi didn't have enough star power to sell the film to national audiences. Therefore, the film's director John Landis was asked to go out and secure one more big name actor for the role of the stoner Professor Dave Jennings. Landis approached one of the biggest actors of the 1970s, Donald Sutherland. Donald also happened to be a family friend (Landis used to babysit for Kiefer). In order to seal the deal, Universal authorized Landis to offer Donald a very generous compensation incentive. What happened next would turn out to be one of the biggest financial blunders an actor has ever made in the history of the entertainment industry. A mistake that Donald Sutherland still regrets today, tens of millions of times over!

Executives at Universal did not have high expectations for Animal House. In fact, one studio executive named Ned Tanen flat out hated everything about the movie. The screenplay was written by an unknown sketch comedian named Harold Ramis who had absolutely no experience in the movie business. Ramis, as you may be aware, eventually went on to write, direct and star in some of the most popular comedies of the 80s and 90s including "Ghostbusters", "Stripes", "Back to School", "Groundhog Day" and more… 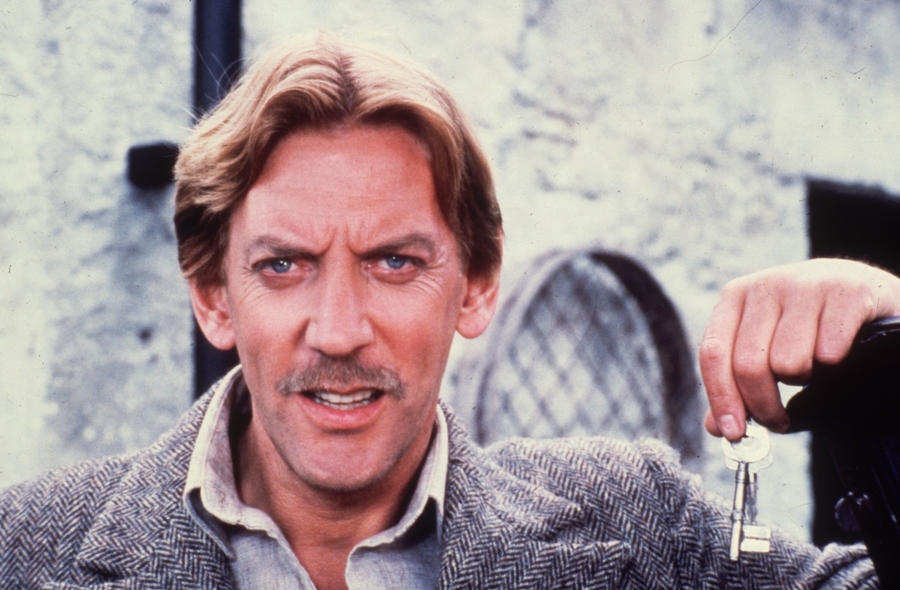 You have to keep in mind that in 1978, the idea of a "gross out" comedy was pretty much unheard of. Today, the plot of Animal House would hardly raise even the most conservative of eyebrows, but in the late 70s, excessive sexual innuendo, drugs, nudity, offensive language, vomiting and general debauchery was shocking. One of Ramis' early working titles for the film was "Lazy Orgy Girls". After writing nine different drafts and settling on the friendlier title "Animal House", the producers finally convinced Universal to pony up a scant $2.5 million budget to get production underway. In the words of studio head Ned Tanen "Screw it, it's a silly little movie, and we'll make a couple of bucks if we're lucky — let them do whatever they want".

With such a minuscule budget, the studio authorized John Landis to persuade Donald Sutherland to accept the part of Professor Jennings by offering him 2.5% of the film's profits plus a salary of $35,000. Sutherland, who thought this movie had no chance of ever making a singe dollar, politely declined. Universal then upped the offer to $35,000 plus 15% of the films gross earnings. Gross earnings, not net earnings. In other words, 15% of whatever the movie made at the box office, BEFORE costs were subtracted. Again Sutherland politely declined. Donald insisted that if he was going to do the movie that he get paid in cash only, and up front. When the negotiations were over, Universal and Donald settled on $50,000 cash up front with no gross points at all. BTW, $50,000 in 1978 is equal to roughly $180,000 today. Considering he believed that the film would be an absolute bomb, Sutherland was rather pleased with his negotiation skills. After all, he did nearly double his salary for what would amount to a grand total of two days work.

Unfortunately, as we all know now, Donald's instincts about Animal House were dead wrong. Almost immediately upon its release, the movie was a huge hit with audiences around the country. The producers and director John Landis quickly scrambled together a nation wide promotional campaign that drew huge audiences dressed in togas everywhere they went. Nearly 10,000 students in togas showed up at the University of Wisconsin-Madison, setting a Guinness World Record for biggest toga party ever that still stands today.

As we all know now, Animal House would eventually go on to be considered one of the funniest movies of all time. In fact, the TV network Bravo ranked it as the #1 comedy of all time. The United States Congress even selected Animal House for preservation in the National Film Registry after deeming the film "culturally, historically, or aesthetically significant".

In terms of money, Animal House would go on to earn more than $141 million at the box office and on home video worldwide. That's equal to roughly $500 million after adjusting for inflation. Because of Animal House's minuscule budget, today it is still technically one of the most profitable movies of all time.

As for poor old Donald Sutherland, his 15% stake would have been worth tens of millions of dollars. He essentially chose to make $50,000 instead of $20 million. When you adjust for inflation, that's the equivalent of an actor today choosing to make $180,000 instead of $72 million. Ouch.

Before we feel too bad for Donald Sutherland, let's remember that he still turned out to have a very successful acting career that was likely boosted by his appearance in Animal House. And if he ever is short of cash, he can always ask his son Kiefer for a piece of his $65 million "24" fortune. Also let's keep in mind that while missing out on $20 million is painful, it's nowhere near as bad as the $450 million that Sean Connery gave up by turning down the role of Gandolf in Lord of the Rings! Similar to Animal House, studio executives thought LOTR needed at least one big star to sell the movie to audiences, so they offered Connery $10 million per film plus 15% of the box office gross on all three movies. Connery turned them down because he "did not understand the script". The Lord of the Rings franchise would eventually earn more than $3 billion at the box office.