By Simon Gerard on September 4, 2011 in Articles › Entertainment

Outer space isn't known for its cuisine, with bland freeze-dried options dominating space stations' menus.  Domino's Pizza has plans to capture the early space travel market by establishing a location on the moon, offering visitors a full restaurant and delivery around the orbit of the earth.

Domino Japan's president, Scott Oelkers and construction firm Maeda Corp have announced detailed plans of a moon location with an estimated price tag of $21 billion. The plan involves 15 rocket trips to the moon to carry approximately 70 tons of construction material and pizza ovens, which would take up about $7 billion of the $21 billion total. To save on these enormous expenses, Domino's will use mineral deposits on the moon to make concrete for the moon branch. 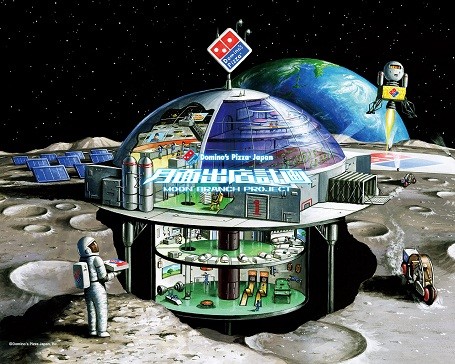 The artist rendering depicts a five-story dome with an 85 foot diameter. The ground floor is used as a warehouse area for distribution and logistics. The two upper levels are used for the kitchen and the dining area, which includes a view of the plantation for fresh ingredients. These two levels are housed in a bubble dome to allow the spectacular views of the moon's landscape, outer space and our blue planet.

The two subterranean are for staff only. One floor includes private areas and sleep pods for employees. The bottom area is for a gym and games room. Since there is little gravity on the moon the gym's weights look to be giant novelty-sized ones to combat the effect.   The games room also incorporates the low gravity, with bowling lanes with loop de loops, space pool and space darts.

There are also plans for a Honda-designed moon scooter to deliver to future moon suburbs and space condos. Domino's has not commented on if their "30 minutes or its free" delivery policy will apply. This announcement comes along with Domino's Japan's 25th anniversary and is shaping up to just be a publicity stunt.  The media speculates this is an attention grab inspired by Pizza Hut's successful pizza delivery to the international space station in 2001.

So if Domino's pizza successfully executes their plans for a moon branch, maybe you can get them to deliver to you and your friends on a Bloon space balloon tour of the upper atmosphere.