All of a sudden, it seems that DJ Khaled is everywhere, and he frequently has his adorable baby son in tow, as he did at the 2017 MTV VMAs. Don't confuse him with Khalid. DJ Khaled is a social media star and DJ in his 40s. Khalid is a 20-year-old singer/songwriter.

DJ Khaled's real name is Khaled Mohamed Khaled. He was born in New Orleans in 1975. His parents are Palestinian immigrants. DJ Khaled isn't quite sure what his job title is. At various times he's called himself a producer, DJ, music mogul, executive, entrepreneur, CEO, and artist. You might recognize his most famous song "All I Do Is Win."

DJ Khaled is relatable. He is both a master self-promoter and a very humble man. He is charming and has presence. That is what has turned the chubby 42-year old into a social media star. He even live streamed the 2016 birth of his son. On Snapchat, his posts are viewed by three to four million people each time. He has more than nine million Instagram followers and more than four million followers on Twitter. His reach—he is popular both with millennials and men—has helped him score a number of endorsements. He shills for Weight Watchers and Turbo Tax, to name just a couple. It pays off for the companies that hire him. The day after his Weight Watchers deal was announced, the company's stock rose 8%. He starred in "Pitch Perfect 3" as himself. He's a host and judge on Fox's "The Four Battle for Stardom." DJ Khaled made $24 million last year. 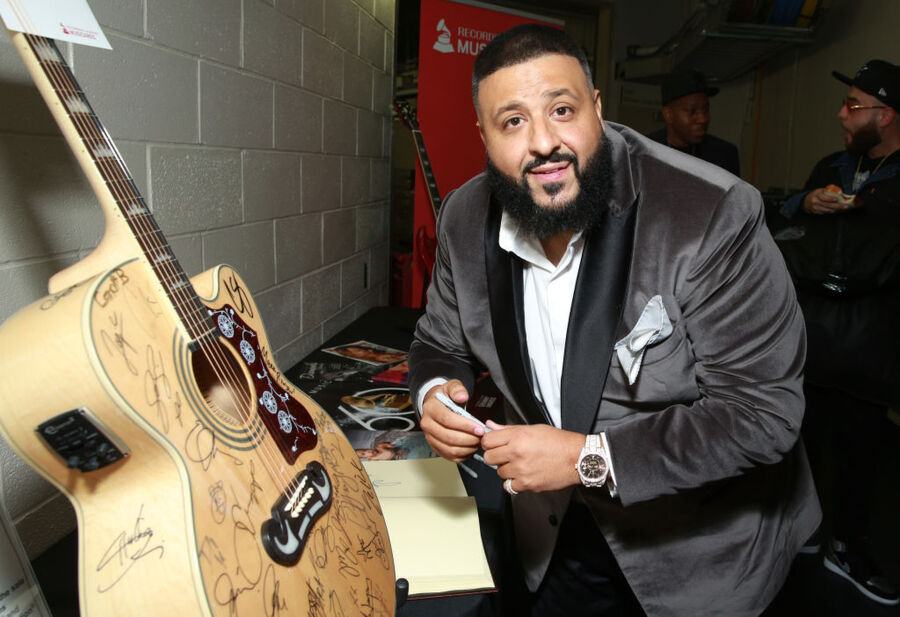 Khaled has released 10 albums in the past 11 years. His most recent is "Grateful." When it came out in June it topped the Billboard 200 chart. But he isn't just a hip hop artist. He's also a talented producer. He's produced videos for Drake, Justin Bieber, Rihanna, and Chance the Rapper, just to name a few.

Life hasn't always been so posh for Khaled though. His parents landed in New Orleans in their early 20s from Palestine. They had $20 in their pocket. His parents sold clothes out of their van at a flea market to make money. They worked seven days a week, 24 hours a day. They hustled to provide for their family.

His family moved to Orlando, which is where the budding mogul started DJing at 13. Around the time he turned 16, his parents were robbed and ran into financial trouble. The two events finished them. His parents moved back to New Orleans to live with family. Khaled stayed in Orlando to work on his music career. He scored a few jobs DJing at clubs but was only making $100 a week. During this period in his life, he was often evicted from his apartment. It was easy to move on. Khaled didn't have any furniture. He slept on the floor.

He was so broke that he moved back in with his parents in New Orleans. He worked as a bus boy and in a record store, where he met New Orleans based rappers Birdman and Lil Wayne. The two would become some of Khaled's first collaborators. After about a year in New Orleans, Khaled won $5,000 in a DJ contest. He rented a U-Haul to move his records and returned to Orlando.

Things didn't immediately turn around. He spent a month in jail after being pulled over one too many times for driving on a suspended license. The experience scared him straight. After he got out of jail, he moved to Miami. It was 1994 and like his parents back in the 1970s, he had less than $20 in his pocket. He DJed anywhere he could get his foot in the door. He lived in his Honda Civic on the nights he didn't crash at his girlfriend's mom's house.

In 1996, Khaled landed a job as a DJ at Mixx96, a Caribbean pirate radio station. Next came a job DJing at the Miami hip hop station 99 Jamz. Later, he got a steady job at Rockers Island, a Friday night Miami party. His DJ career was slowly gaining momentum. This was all in the prehistoric days before social media. He had to show up, work hard, and hope people remembered him and talked about him.

In 2003, Khaled got his own show at 99 Jamz. He stayed at the station for another decade. Over time, he realized that he wanted to produce his own music. He started his record company We the Best in 2006. In 2007, he released "We Takin' Over," featuring guest appearances from Akon, Birdman, and Lil Wayne.

Even though Khaled grew up in the time before social media, his career has absolutely exploded over the past couple of years because of it. Khaled often says that Snapchat changed his life. He joined Snapchat in late 2015. He had just come off a tour and shared his daily life with followers. He posted videos of him doing mundane things like watering his plants while talking about the weird aspects of success. His audience snapped it up. He became a bonafide social media star on a platform for millennials.

Once he conquered Snapchat, the floodgates opened. He got gigs in Las Vegas and was startled to find he was recognized and followed by fans who followed him on Snapchat.

Part of his popularity is tied to the positivity and gratefulness he exudes. He tells his followers that it is important to stay away from naysayers and people who would derail your dream, your studies, or your career. And, let's face it, we could all use a bit more positivity in our daily lives.

DJ Khaled has a net worth of $20 million.