If you're not familiar with the story of Adam Neumann and WeWork, I have three major recommendations. #1) Read the book "Billion Dollar Loser" by Reeves Wiedeman. #2) Watch the Hulu documentary "WeWork". And #3) Go to this link right now and pre-order Eliot Brown and Maureen Farrell's book "The Cult of We." The book, which will be released July 20, is rumored to be chock-full of new salacious revelations concerning how the Neumanns used WeWork as a means of egregious personal enrichment.

Just so you have a long-story-short background to understand today's development, Adam co-founded the office sharing company WeWork in 2010. The company raised ungodly amounts of venture capital funding, primarily from Japan's SoftBank, then went on an insane spending spree. Much of that spending went to secure long-term rentals on buildings which WeWork would renovate into shared work spaces that would be rented to short term clients. Another huge chunk of money was wasted on lavish corporate parties, private jets and weird investments like the $13 million it invested into a company that created artificial waves for surfing.

WeWork was losing hundreds of millions of dollars at the time it angled to go public with an IPO in late 2019. The company released a widely-mocked S-1 filing in September 2019. The S-1 combined with several personal controversies – like the revelation that Adam smoked pot on a company-owned private jet or that he owned several of the buildings that were being leased at a profit back to WeWork – forced him to resign as CEO of WeWork in September 2019.

It was a stunning and fast fall from grace.

At his professional peak in mid-2019, Adam's personal paper net worth topped $14 billion. At that point analysts were predicting the value of WeWork would top $80-100 billion once it completed an IPO. The exact opposite happened.

WeWork's largest private valuation was actually $47 billion. It achieved that valuation after a funding round completed in early 2019. Soon after stepping down in late 2019, WeWork's valuation had dropped to $8 billion.

In the end, WeWork essentially raised $11 billion in VC capital to create a company that was worth $8 billion. 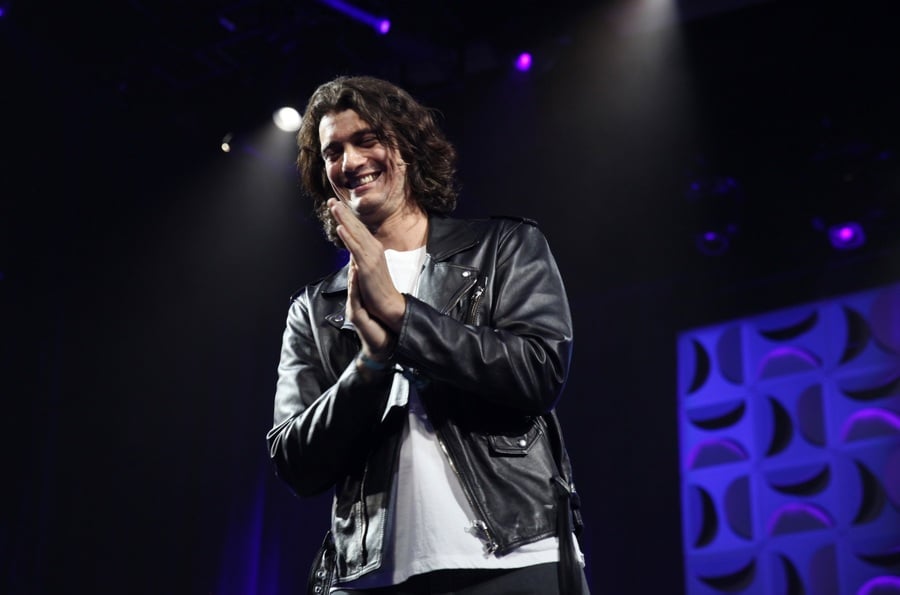 In order to extricate themselves from Adam Neumann, SoftBank initially agreed to buy $972 million worth of stock from the former CEO. The bank also refinanced roughly $500 million worth of Adam's debt that was backed by his shares. Most insane of all, the company gave him a $185 million "consulting fee."

A few months into 2020, after Coronavirus further ravaged WeWork's prospects, SoftBank announced it was reneging on the deal. It stopped paying his consulting fee and held back on its plan to buy $972 million worth of Adam's shares.

Lawsuits flew and in the end SoftBank agreed to buy around half of the $972 million shares it had previously promised.

SoftBank ultimately agreed to pay Adam $106 million in cash. That's on top of $92 million in consulting fees Adam had already received before the deal went sour, according to SEC filings.

Unbelievably, WeWork is about to take a second stab at going public, this time through something called a SPAC. That stands for "Special Purpose Acquisition Company" and it's essentially a backdoor way of going public without the traditional bank-run process.

As you probably know, normally when a company goes public it has some business model. It's been operating that business model for a number of years. It has costs and revenues. For example, Facebook. Facebook operated as a private company until 2012. Before becoming a public company, it did a tour of the country with its investment banks to drum up interest in how it will be an extremely valuable company over time as revenue and profits increase. It had employees, office space, chairs, servers etc…

A SPAC has nothing. It's simply an entity that goes public to raise money. It's a shell company that holds a bunch of money that must be used by a certain date to acquire another company. That's its entire purpose… or "Special Purpose".

In the case of WeWork, the SPAC is called BowX Acquisition Corp, ticker symbol "BOWX". You can look it up. You'll see BOWX went public in October 2020 at around $10 a share. Today it's trading at $12.30 a share which gives it a $740 million market cap.

BOWX is agreeing to buy 6.1% of WeWork for $483 million. And through the magic of the public markets, BOWX essentially becomes the publicly-listed entity of WeWork. Yada yada yada, in the end if the deal consummates, WeWork will finally be a public company.

And somehow, once again, Adam Neumann is cashing in.

According to a report first spotted by the Wall Street Journal, as part of this SPAC plan Adam landed a $245 million "sweetener" from BOWX. Specifically, if the deal is successful and the stock price stays above $12 after the WeWork merger, Adam will be granted $245 million worth of shares with a cost of zero dollars per share for him to acquire. A free $245 million.

If the price of BOWX drops below $10, he gets ZILCH.

If all goes to plan, WeWork will be worth $9 billion when it is finally a public company. That's $1 billion more than it was worth immediately after Adam stepped down and $38 billion below it's all-time valuation peak of early 2019.