Mired in yet another losing season, it's safe to say the New York Knicks officially stink. It's safe for ME to say that, because I'm in the comfort of my own home. For one Knicks fan, remarking that the team "stinks" actually cost him a very high paying job. And now he's suing.

The fan's name is Anthony Rotondi. Rotondi was ejected from Madison Square Garden during a Knicks game on January 7, 2014. This ejection eventually ended up costing him his job as a trader at ING. That's a pretty harsh transition. So how did it happen?

Allegedly, a fellow employee at ING and MSG Vice President, Courtney Jeffries, had a conversation the day after Rotondi's ejection. Jeffries told the employee that Rotondi was acting disorderly and refused to leave the arena once he was ejected. Over email, Rotondi's boss cited him for using "excessive verbal abuse" and "offensive language towards Knicks players."

Why did Rotondi's behavior at a Knicks game have anything to do with his job? Well, it didn't help that he was sitting in one of ING's four courtside seats–which go for about $3,000 a pop.

Most of Rotondi's offensive language was directed at Carmelo Anthony. With just 6.7 seconds left in the game, Rotondi reportedly yelled "Carmelo, you stink!" 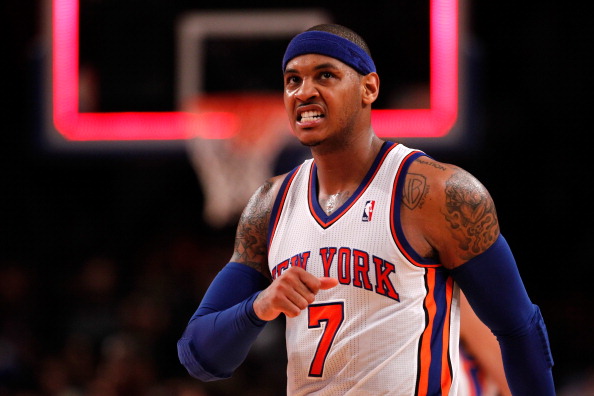 For what it's worth, Carmelo scored a game-high 34 points that night. He was 6 for 7 from 3 point range. Rotondi was probably frustrated that the Knicks were leading 73-58 at the start of the fourth quarter. The Pistons mounted an impressive comeback, but in the end the Knicks won 89-85.

Not only did Rotondi get tossed from the arena, he ended up being arrested and charged for second-degree tampering with a sports contest (a law you didn't know exists until just now) and third-degree criminal trespass. To make matters worse, the day after the game, ING received several phone calls from executives at Madison Square Garden complaining about his "vulgar," "abusive" and "disorderly" behavior the night before.

He was fired that very same day. Rotondi had been an ING employee for 12 years.

MSG officials, who have plenty of video footage of Rotondi at the game, are standing by their actions, saying in a statement:

"We do not welcome anyone into the building who behaves in an inappropriate and hostile manner, and those who behave that way are subject to ejection."

Rotondi's lawyers responded by claiming that he was merely reacting to the "high energy atmosphere" that MSG encourages at games with the use of "art lighting, sound and LED video systems [to] lead the crowd in cheers. At no point did Rotondi interfere with the game. To the contrary, Rotondi merely engaged in the type of fan-like conduct the Garden encourages each and every night that the Knicks play, and that he had engaged in at previous Knicks games at the Garden."

Rotondi filed a lawsuit against Madison Square Garden in September, saying that Jeffries' comments directly led to his termination at ING. He's gone nearly 15 months without a job, which he claims has resulted in a loss of $370,386.

Will this be a successful lawsuit? MSG doesn't think so, calling the entire thing "frivolous." It's already filed a motion to dismiss the case.