By Brian Warner on January 8, 2019 in Articles › Entertainment

Dick Wolf is the enormously successful creator of a bunch of popular TV shows that you've definitely watched at some point. His two biggest creations are the "Law & Order" and "Chicago" television franchises (Chicago Fire/Med/P.D. etc). As of this writing, more than 1,500 episodes have been produced between the two franchises, with several more churned out basically every week. The shows have been syndicated and replicated globally to immense success for nearly two decades. Some American networks have been known to show six hours of Law & Order content every day (looking at you USA and TNT). Wolf also created the series "FBI" that premiered in 2018 and was recently renewed for another season.

As you might imagine, Dick Wolf is rich. Extremely rich. Whenever you are the creator of a popular TV show that sells into syndication, it's like winning the lottery. By my count, Wolf has hit the lottery at least 4 times with several more tickets to be cashed down the road.

But exactly how rich is Dick Wolf? How much does he make in a given year or month? Thanks to a recent divorce court filing, we know the answer! 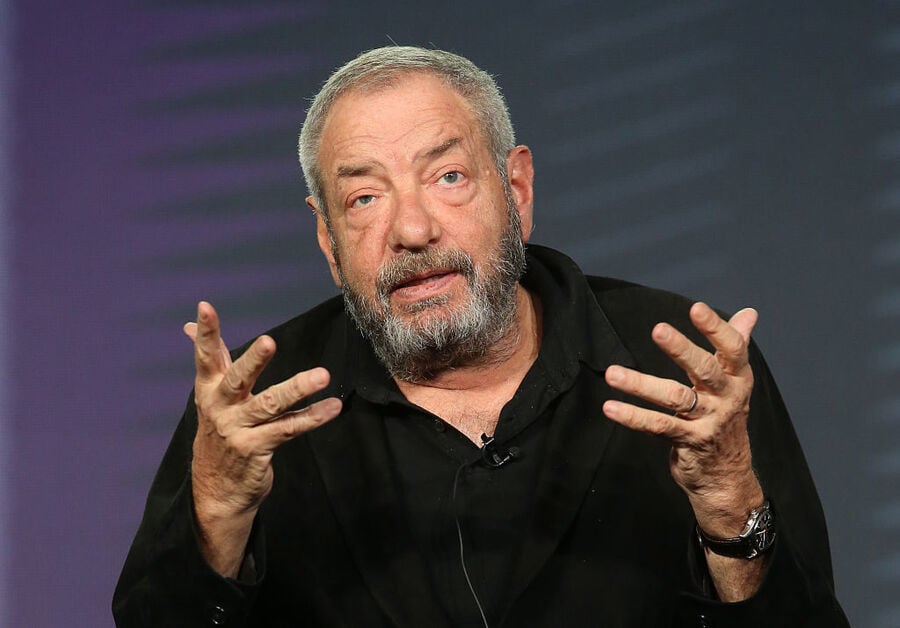 Dick Wolf started his career working as an advertising copywriter. He wrote screenplays in his free time with the hope he might someday break into the film industry. He moved to Los Angeles a few years after meeting struggling screenwriter Oliver Stone, and subsequently had three of his screenplays produced. One of these, Masquerade, starring Rob Lowe, was particularly well received. He also held a position as a staff writer on the television series Hill Street Blues, for which he received his first Emmy nomination.

From Hill Street Blues, Dick moved to Miami Vice, where he served as supervising producer. Miami Vice brought him great success, but nothing like that of his future series Law & Order which debuted in 1990.

Dick has been married three times. His second marriage to Christine Marburg, which lasted from 1983 to 2005, ended with a divorce battle that dragged on bitterly for 12 years. He married Noelle Lippman in 2006. It was revealed on TMZ today that Wolf and Lippman are currently divorcing. More on that in a minute.

Even though Dick and Christine's marriage legally ended in 2005, they began divorce proceedings in the early 2000s. They reached a settlement in 2003 that resulted in Dick forking over a one-time lump sum of $17.5 million plus $2 million a year for eight years. Not surprisingly, a big part of their settlement talks was the value of Law & Order. Since it was created during their marriage, Christine was legally entitled to half the value of the show.

During negotiations, financial advisors working for Christine estimated that the total value of Law & Order was a meager $8 million. Part of the reason the show was valued so low was because years earlier Dick had taken out loans against future profits of the show to buy the family multiple homes around the country, including their $15 million primary residence in Santa Barbara. As a result, at the time of their divorce negotiations Dick technically owed NBC as much as $40 million. Furthermore, the financial firm reported that Law & Order's future profit prospects were "uncertain".

So, you can imagine Christine's shock when, just a few months after signing the settlement deal, she read in the LA Times that claimed Dick was finalizing a new production deal with NBC that valued Law & Order at $1.6 billion. Literally just a few months after everyone agreed it was worth $8 million. It was described at the time as the most lucrative deal in TV history, and might still hold that record.

Christine sued to overturn their settlement alleging that Dick misled the court and her lawyers about the value of Law & Order and the talks he almost certainly had been having with NBC while their divorce was in flux. A Santa Barbara judge quickly disagreed with her suit, stating that Christine and her legal team agreed to follow the valuation provided by the financial firm and had plenty of time to dispute.

Christine's lawsuits went on for years up and down California's court system. She even sued the financial firm claiming they delivered a low valuation in order to win Dick as a client after the divorce. She demanded to see internal emails to see if she could prove that the firm knew of Dick's impending NBC mega-deal.

Unfortunately (for her) she lost. In 2016 a judge essentially dismissed all of Christine's claims. But note that timeline. Their divorce was initiated sometime in the early 2000s and wasn't settled until 2016!

In 2016 Dick signed a new deal that kept Wolf Entertainment at NBCUniversal through 2020. This deal will be exhibit A in his current divorce from wife #3 Noelle.

Perhaps learned Dick learned his lesson from the previous divorce because, according to TMZ, he has a fairly rock solid prenup with Noelle. A prenup will likely protect his TV empire since it existed before their marriage. In other words, this time Dick will NOT have to fork over 50% of the value of his TV shows. However, even with a prenup he will still need to fork over half the value of the assets the couple acquired during their marriage (houses, stock, bank accounts, cars, jets, art, jewelry…). He'll also likely have to pay ongoing spousal support based on his most-recent monthly income. So how much are we talking about?

According to a recent court filing from Noelle's legal team, Dick Wolf's current income fluctuates between $10 and $15 million PER MONTH. Also known as $120 – $180 million per year!

Now you can understand how Dick Wolf has earned a net worth that we currently (pre-divorce settlement) estimate at $550 million.

So even if Noelle doesn't get half the value of his TV shows, she'll still likely get millions in monthly support for many years. She'll also get child support for their two children who are aged 8 and 11.

We'll keep you posted as we learn more about what is sure to be a fascinating courtroom drama. Speaking of which, I need to get back to writing my courtroom TV series.