By Amy Lamare on December 2, 2020 in Articles › Entertainment

Is there a person on the planet who doesn't love the Peanuts? Snoopy, Charlie Brown, Lucy, Pigpen, Schroeder and the gang are the iconic creations of Charles Schulz. In fact, the Peanuts are still so popular that they earned Schulz's estate $32.5 million over the last year, two decades since his death due to cancer. That's good enough to make him the third highest-paid dead celebrity of the year. Michael Jackson is number one and fellow cartoonist Theodor Geisel aka Dr. Seuss is number two. Part of Schulz's haul comes from the new Apple TV+ show "Snoopy in Space" as well as classics like "A Charlie Brown Christmas."

The Peanuts creator is consistently one of the highest-earning dead celebrities. In a typical year, his heirs have been known to earn more in royalties than the heirs of John Lennon, Jimi Hendrix, and Elizabeth Taylor combined. And if that's not crazy enough, Charles himself is believed to have earned over $1 billion during the comic strip's unprecedented 50 year run. 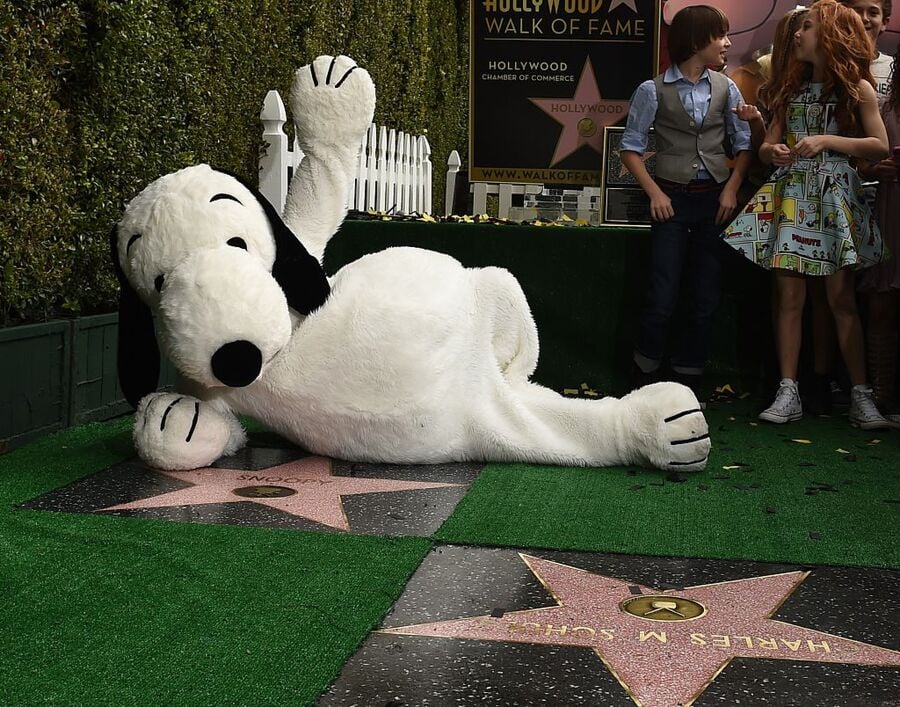 Charles Monroe Schulz was born in 1922 in Minneapolis. His dad was a barber and his mom a housewife, just like his character Charlie Brown. Schulz knew he wanted to be a cartoonist in kindergarten when he started drawing Popeye. By the time he was in high school he was submitting his original cartoons to his school paper as well as local magazines. Unfortunately, he didn't have a whole lot of success with that approach. Another area where Schulz was not a success was in school: he flunked most of his classes. We will assume that's because he was wholly consumed by drawing his cartoons and neglected his studies. Earlier in his schooling he skipped two grades, so he was the youngest person in his classes by far. He took a correspondence course in art after graduating from high school. Schulz was drafted into the Army and fought in Europe during World War II.

Schulz created a cartoon called "Li'l Folks" for the St. Paul Pioneer Press. His cartoons were noticed by someone at United Feature Syndicate, a newspaper syndication company. They offered to syndicate Schulz's cartoons to their national network of newspapers with one condition: they wanted him to change the name of his comic strip to Peanuts. Schulz hated that idea, but UFS was already running a comic with a very similar name and to be honest, this was not a deal he could pass up.

At its peak, Peanuts was syndicated to more than 2,600 newspapers in 71 countries and 21 languages every day. Peanuts also made a fortune with merchandise and endorsements. By the 1980s Schulz was the highest-paid celebrity in the world by far, with $30 million in royalties. That's equal to $65 million today. From 1990 until his death in 2000 he earned $40 million a year. His obituary stated that he had made more than $1 billion between 1950 and 2000 from the sale of merchandise, television shows, and endorsements. Over nearly 50 years, Schulz drew 17,897 published Peanuts strips. The last Peanuts cartoon ran on February 12, 2000, one day after Schulz died.

Schulz married Joyce Halverson in 1951. He adopted her daughter Meredith and the couple had four children. They lived in Colorado Springs, Colorado and in Minnesota until 1958. At that time, Schulz and his family moved to Sebastopol, California. In 1969, Schulz moved to Santa Rosa, California where he lived and worked until his death from colon cancer that had metastasized. Schulz and Joyce Halverson divorced in 1972 after it was revealed that he had been having an affair with a 25-year-old. In 1973 he married Jean Clyde. They were married until his death in 2000.

Schulz wrote and drew every single comic himself. When he died, his will stated that no new Peanuts comic strips ever be drawn by another cartoonist and to date, his wishes have been honored. His heirs don't have to worry though, with $32.5 million in income this year, not to mention decades of earning $25-$30 million per year for two decades, they are sitting pretty.