Decades After He Died, Dr. Seuss Is Still Making A TON Of Money

By Amy Lamare on November 24, 2020 in Articles › Entertainment

Theodor Geisel, aka Dr. Seuss, has been dead for nearly 30 years and his estate is raking in the cash – especially this year, which given all that's been happening in the world with the pandemic, is pretty poetic. Dr. Seuss died on September 24, 1991, at the age of 87. This year, he's the 2nd highest-paid dead celebrity with $33 million. During his lifetime, he gave us "The Cat in the Hat" and "How the Grinch Stole Christmas" and "Horton Hears A Who". Seuss began his career as a cartoonist in the 1920s. He wrote his first children's book in 1936. He wrote about 60 books overall but never really monetized his brand or characters beyond the 1966 Grinch television special and a handful of deals for bedding and stuffed toys. Before he passed away, Seuss urged his wife Audrey to get his work out there to "the widest possible audience in any and all media throughout the world." She's done just that and thanks to the deals she's orchestrated, Seuss went from earning $9.5 million in 2015 to $33 million in 2020.

Audrey Geisel founded Seuss Enterprises in 1993. She spearheaded Jim Carrey's "Grinch" movie in 2000, the 2003 film "The Cat in the Hat" starring Mike Meyers, and the 2008 hit film "Horton Hears a Who!" All of that was a drop in the proverbial bucket compared to the slate of Seuss related content available today. Netflix picked up the rights to a "Green Eggs and Ham" animated series. The project cost $65 million and starred the voice talents of Michael Douglas, Diane Keaton, and Keegan-Michael Key. Seuss Enterprises also orchestrated a three-movie deal with Warner Brothers that will explore the characters "Thing One and Thing Two", "The Cat in the Hat", and the world of "Oh, The Places You'll Go!" 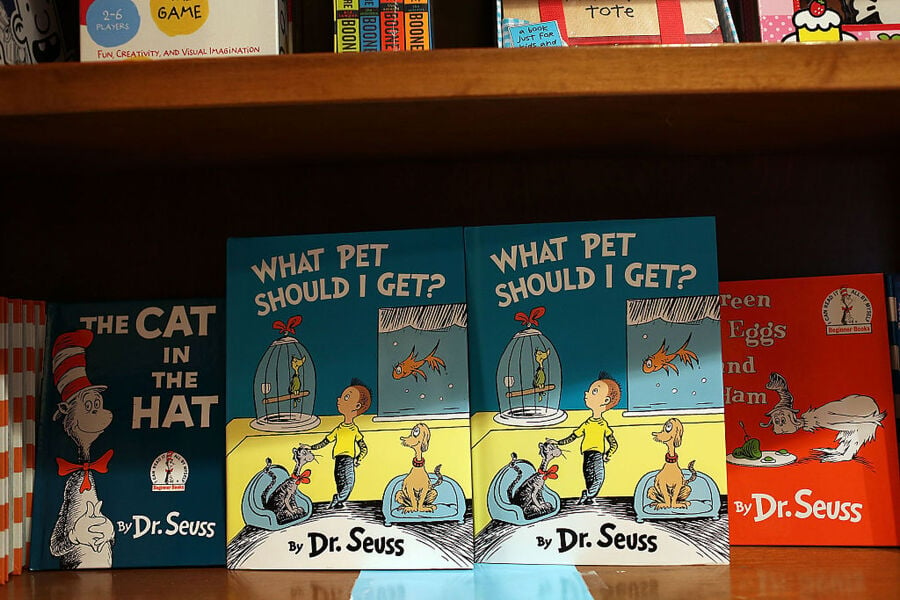 Seuss is in the right place at the right time, nearly 30 years after his death. The race for content is hot among streaming services like Netflix, Apple Plus, Disney, and Amazon. Combined, the services spent $120 billion last year acquiring content. Brand names – like Dr. Seuss – are considered to be the most desirable kind of content to go after.

Theodor and Audrey Geisel never had children. There's no heir to Dr. Seuss's fortune. Audrey Geisel died in 2018 at age 97. All of the profits go back into Seuss Enterprises. That's how the 50-word book "Green Eggs and Ham" became a big-budget animated television series. The 13-episode series debuted on Netflix in November 2019. At a cost of $65 million, it's the most expensive animated series ever made. It was the number one show on Netflix during its first week of release. It was renewed for a second season in December 2019. Seuss Enterprises made about $5 million from "Green Eggs and Ham" the series.

Between Netflix, the Warner Brothers deal, and other commitments, Seuss Enterprises will receive seven-figure paychecks for the rights to Dr. Seuss's original material. The company will get bonuses as well if the films do well at the box office. Seuss Enterprises will then issue books and short-form animation on YouTube to increase its audience and bring a new generation to the wonderful world of Dr. Seuss. There's even a Seuss themed cruise called Seuss at Sea that has a green eggs and ham breakfast. The company also launched a traveling Dr. Seuss exhibition in 2019 to great success. It sold more than 175,000 tickets and $1 million in merchandise in five months before it was put on hold due to the coronavirus.

Dr. Seuss is on its way to becoming one of the 50-biggest licensed brands. And that just seems right. After all, it was Seuss who wrote: "Oh the things you can find if you don't stay behind!"