By Paula Wilson on December 27, 2013 in Articles › Entertainment

We hear stories every day about people who excelled at school, and excelled at sports, or excelled at, well, everything, going on to greater and greater things as adults. We also hear stories every day about people who became extremely succesful thanks to a well-connected parent or inheritence. Those stories are fine, but rarely do we read or hear about a very ordinary person with no headstarts at all, going on to have a massive impact on multiple industries.  David Geffen is one of Hollywood's most powerful executives, and with a net worth of $5.5 billion, he is also one of the wealthiest.  Unlike many major executives, however, he built his empire from absolutely nothing.  He had no road map and no clear idea of what he was trying to achieve.  There were no family members to show him the way, and no doting mentors to steer him down the right path.  Instead, David Geffen was an ordinary young man… who went on to have an extraordinary impact on entertainment around the world. 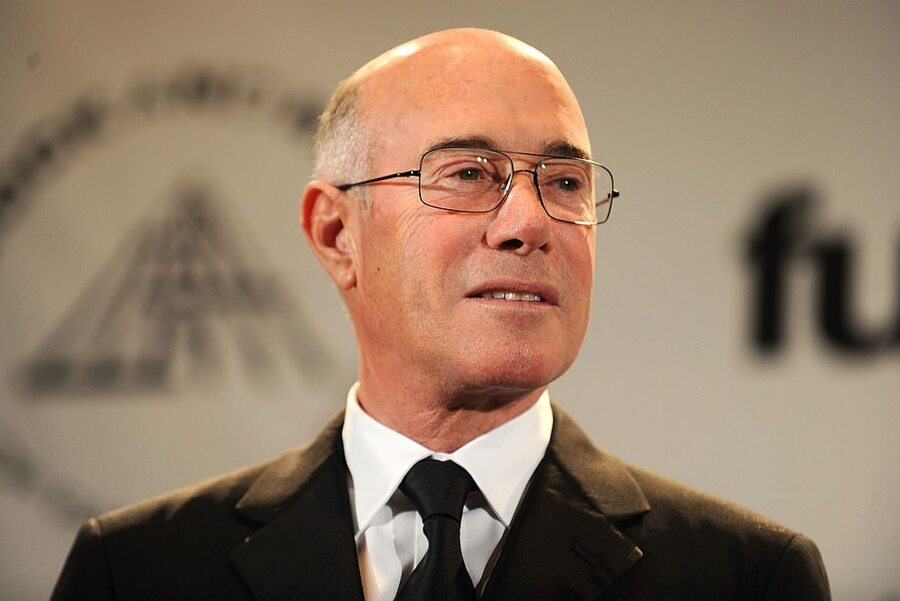 David Geffen was born in February 21, 1943 in Brooklyn, New York.  His parents were Jewish immigrants who had met in Palestine.  His father was a pattern maker and his mother made and sold undergarments in her own shop called, Chic Corsets by Geffen.  He went to public school and hung out with other kids from the neighborhood.  He discovered an interest in theater and music after reading "Hollywood Rajah", the story of Louis B. Mayer.  He began to appear in theater productions at school.  His father passed away when he was 16, and he got a job working in the mailroom at CBS.  After graduating from New Utrecht High School in Brooklyn, he headed West.  He spent one semester at the University of Texas at Austin, but flunked out due to low grades.  He then headed to Santa Monica College, but his education there did not last either.  He headed back to the East Coast, where he held a series of odd jobs, while making another attempt at college, this time enrolling at Brooklyn College.  His third try was not the charm either, unfortunately, and he dropped out.

Around this time, he secured a job as an usher at CBS-TV.  In his eyes, it was the perfect job.  He was able to watch stars like Judy Garland and Red Skelton rehearse, and to see how each program came together from the inside out.  He recognized that he didn't have the innate talent of performers like Judy Garland, but he knew he wanted to be involved in production in a more direct way.  He began to climb the ladder at CBS, moving from being usher to serving as the receptionist for the series, "The Reporters".  He was almost immediately fired, however, when he began making script suggestions to producers.  A casting director on the program suggested he might make a better agent with his attitude, and David Geffen decided to listen to him.  Unsure of where to begin, he simply opened the phone book and looked for the biggest agent advertisement he could find.  That advertisement belonged to the William Morris Talent Agency.  He snagged a spot in the mailroom at William Morris, and began working his way up the ladder again.  He wanted to become a talent agent, but he had to prove that he was a college graduate.  He told his bosses at William Morris that he had graduated from the University of California at Los Angeles.  Then, when the letter arrived stating that he had not actually attended the school, he grabbed it out of the mail (he worked in the mail room after all), altered it, and sent it on its way.  He was soon made a junior agent.

Always gregarious and fun, he had begun to make friends in the music community, and ultimately decided to focus on being a personal manager.  His first major clients included Laura Nyro, Crosby, Stills and Nash, and Jackson Browne, all relative unknowns when they began working with him.  He was tenacious about building the careers of his artists, and he quickly became known as a fair, ambitious, and loyal manager.  Watching him attempt to secure a record deal for one of his artists, a record executive at Atlantic suggested he start his own label.  Recognizing good advice when he heard it, David Geffen launched Asylum Records.  He seemed to have an unerring eye for artists whose sound existed outside of the box, but who would come to revolutionize music.  He signed the Eagles, Joni Mitchell, Tom Waits, Linda Ronstadt, and Judee Sill, to name just a few.  Warner Communications ending up buying Asylum, merging it with its record company, Elektra.  He ran Elektra/Asylum until 1975, when he was invited to take over Warner Brothers' film studios.  Though he had been able to figure out how to succeed in the agent and music worlds, his foray into running a film studio was not particularly successful.  He was also ill, and was subsequently diagnosed with terminal bladder cancer.  He retired and stepped away from the Hollywood lifestyle.  However, three years later, he was still alive and kicking, and it was revealed that he was actually cancer-free and had been misdiagnosed.  He dusted himself off and went back to Hollywood.

Now re-energized and focused, he returned to his first love, music, and launched Geffen Records.  The label's first year, 1980, was tumultuous.  He signed Donna Summer first, and released her album, "The Wanderer".  However, her former label retaliated, releasing multiple tracks from her 1979 album, "Bad Girls", and a greatest hits compilation.  Though "The Wanderer" spawned a hit single, it was buried in the influx of other Donna Summer material and the advent of the New Wave sound.  That same year, he released John Lennon's album, "Double Fantasy".  It was a coup for the new label, but it quickly turned bittersweet, when Lennon was assassinated that year.  The album became a massive bestseller, but Geffen was unable to celebrate its success with its artist.  From there, he went on to sign and work with a "who's who" of music heavy-hitters, including Olivia Newton-John, Elton John, Sonic Youth, Cher, Aerosmith, Peter Gabriel, Whitesnake, Blink-182, Nirvana, Guns N' Roses, Lifehouse, Pat Metheny, and Neil Young, among many others.  Along the way he sold Geffen Records in one of the largest music deals in music history, and launched another label called DGC Records, which was equally successful. 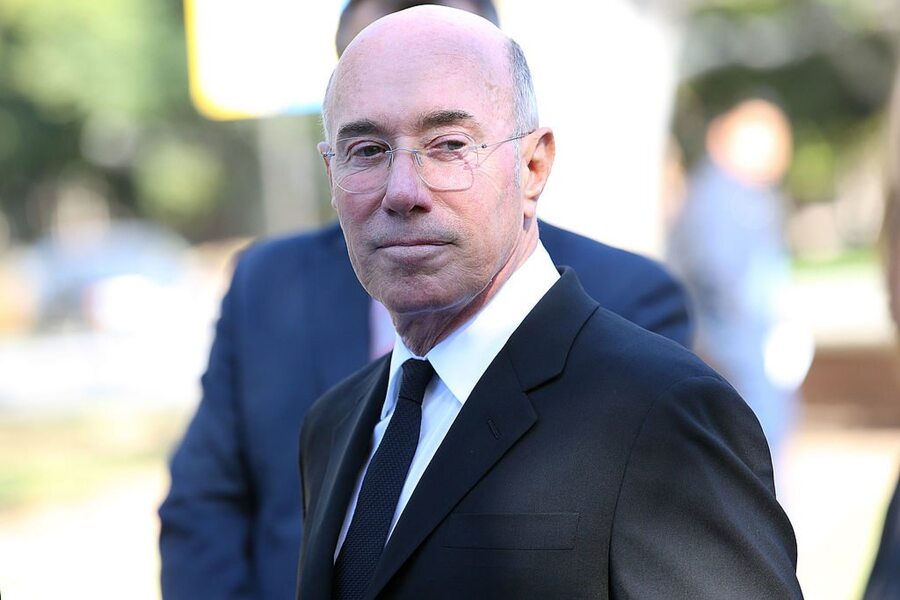 He also decided to try his hand at film production again, and launched the Geffen Film Company.  Like Asylum and Geffen Records, it was a success out of the gate.  The company's first project, "Risky Business", was box office gold and made a star out of then unknown, Tom Cruise.  He went on to produce the film version of "Little Shop of Horrors", "Beetlejuice", and "Interview with the Vampire", as well as the Broadway productions of "Dreamgirls" "Cats", "Miss Saigon", and "M. Butterfly".  In 1994, he teamed up with Steven Spielberg and Jeffrey Katzenberg to form Dreamworks SKG.  The movie studio has gone to release a steady stream of hit movies, including "Amistad", "Deep Impact", "Saving Private Ryan", "American Beauty", "Gladiator", "Chicken Run", "Almost Famous", "Meet the Parents", "Castaway", "Shrek", "A Beautiful Mind", "Minority Report", "Catch Me If You Can", "Old School", "War of the Worlds", "Red Eye", "Match Point", "Revolutionary Road", "The Lovely Bones", "Cowboys and Aliens", "Real Steel", and "Lincoln".

With his massive wealth and influence, David Geffen is walking proof that you can come from completely ordinary beginnings and arrive at greatness.  He was an average student with no contacts in the entertainment industry, but he still managed to become one of the most powerful executives in Hollywood.  Sometimes it's not about where you're from, it's about where you choose to go.  For David Geffen, he clearly chose to go all the way to the top.