By Amy Lamare on April 2, 2018 in Articles › Entertainment

Some people become entrepreneurs out of necessity. Others are suddenly struck with inspiration at some point in their careers. Still others are born entrepreneurs. Spotify founder Daniel Ek falls into the latter category. Sean Parker and Sean Fanning started the revolution with the illegal download site Napster, and now, nearly two decades later, Ek has perfected it – and made it legitimate. With Spotify, Ek has built a way to make music available to listeners for free without piracy issues, while at the same time offering a sustainable revenue model to musicians and investors.

Napster created a generation of people who didn't believe they needed to pay for music. iTunes came along and created another one who only bought singles, not whole albums. The music industry was broken. Revenue was way down. And then Ek came along and gave the world Spotify, which gave the world access to almost every song, on demand, for free. For the small inconvenience of hearing an ad once in a while, Spotify's users have access to more than 16 million songs on their desktops for free. Pay $10 a month and users can take those songs, the playlists they've built off of them, and the artists they've discovered mobile on phones and tablets. Music executives credit Spotify with single-handedly stopping a decade of declining revenues. Daniel Ek disrupted the music industry and that's exactly what the 35-year-old set out to do. 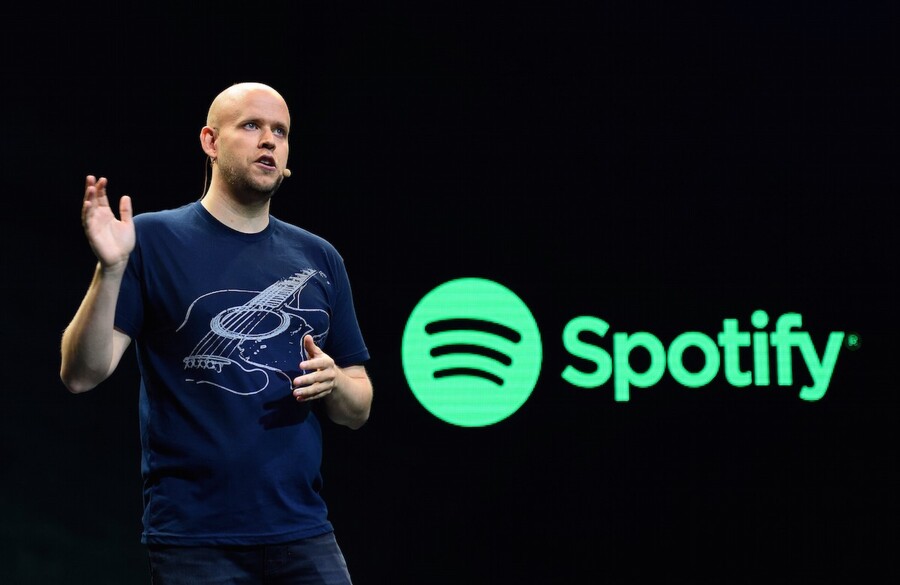 It all started coming together for Ek when he was five years old. It was 1988, when he received a guitar and a Commodore 20 computer. His maternal grandparents were an opera singer and jazz pianist. His stepfather was in IT. It turned out that Ek was a natural at both instruments. By 1990 he was writing basic code in the apartment he lived in with his family in the rough Ragsved neighborhood of Stockholm.

By the time he was 14, Ek was making commercial websites in his high school's computer lab. Though the going rate for a website in the late 1990s was $50,000, Ek charged $5,000. He made up for it in volume. Ek trained his math whiz friends in HTML and his creative friends in Photoshop. Not long after, he was netting $15,000 a month.

Ek then set out to know everything there was to know about the Internet. He bought some servers and started making an additional $5,000 a month hosting web pages. When he was 16, he was obsessed with Google's speed and applied to be an engineer there. Google told him to stay in school and contact them when he had his degree. Undaunted, Ek set out to build his own search company. That project didn't succeed, but it did lead to a job doing search engine optimization at a company called Jajja. After graduating from high school, Ek spent eight weeks at Sweden's Royal Institute of Technology studying engineering. The problem for Ek was that the whole first year of studies focused on theoretical mathematics. He dropped out.

Stockholm-based ad network Tradedoubler asked Ek to build a program to tell them about their clients. The program Ek built was so effective Tradedoubler paid him $1 million for the rights to it in 2006. Patents related to his program netted him another $1 million. Ek was a self-made millionaire and 23 years old. But he wasn't happy. He chased the fast life – he bought a three-bedroom apartment in Stockholm, a red Ferrari, and hit all the city's hottest nightclubs. However, the right women still didn't flock to him and Ek didn't understand why. Ek was attracting the wrong women with his big spending. He was trying to be cool. Instead, he was depressed. He sold the Ferrari and moved into a cabin near his parents. There he played guitar and mediated. It was then that he hit upon the idea to start a new company that joined his two passions of music and technology together.

Ek started hanging out with Martin Lorentzon, the chairman of Tradedoubler. Lorentzon was a veteran of Silicon Valley via Alta Vista and took Tradedoubler public in 2005, which put $70 million into his bank account. As chairman, Lorentzon was not involved in the day-to-day of the company and was bored. Ek and Lorentzon bonded over marathons of films like Carlito's Way and The Godfather trilogy. The two soon realized they had exactly the right chemistry to be business partners and Ek pressured Lorentzon to leave Tradedoubler and invest in his company.

What made Ek and Lorentzon such a formidable partnership was that Ek no longer cared about the money and Lorentzon no longer needed the money. They set out to create a product that wasn't about going public and making millions. They set out to disrupt the music industry. In the wake of Napster and iTunes, the music industry was failing even though due to those two technological forerunners, people were listening to more music from more artists than ever before.

Ek and Lorentzon started tossing around possible names for their music site even before they were sure what their site would do. Lorentzon shouted out a word that sounded like Spotify to Ek, who typed it into Google. There were zero hits (today: 108 million). The duo registered the name and started working on an ad-based plan. The eventual prototype they build was based on the iTunes interface and the streamlined black angles of Ek's flat screen TV. Ek refused to launch Spotify until he had signed deals with the labels, proving he was unlike predecessors in this arena, most of whom launched with pirated songs.

Ek found global music rights pretty impossible to obtain, so he focused on European rights, which he thought would take about three months to nail down. Instead, it took two years. Ek's pitch that his free, ad-based music streaming service would eventually lead to more record sales fell on deaf ears. Fortunately Ek, at just 23-years old, was loaded with conviction in his idea.

After failing to obtain music rights, he loaded Spotify with pirated songs in order to provide music execs with a working demo. That got their attention. Ek offered the labels million-dollar advances and equity in the company for access to their vast catalogs of music.

Spotify launched in Scandinavia, France, Spain, and the U.K. in October 2008. It took three more years for U.S. licenses to be finalized. Napster co-founder Sean Parker, who is now a board member at Spotify, speaks highly of Ek. Parker has often commented on Ek's tenacity. Ek had to have an extreme amount of patience to achieve what he has in the music business. Parker was instrumental in opening the door in the U.S. for Spotify with labels and Facebook.

Whereas Spotify had a hard time attracting investors initially, that is no longer the case. The company has gone from a small Swedish entity to a global juggernaut and now attracts big name investors with billions of dollars. In June 2015 the company closed a $526 million round of funding that valued the company at $8.53 billion.

When it goes public tomorrow, April 3, 2018, it's expected to enter the public markets with a valuation of $12 billion.